Politicians & Corporations – It’s All About Money 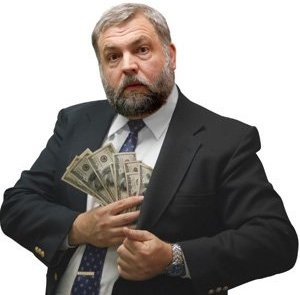 The fluoride mandate is a fitting example of governmental power and corporate control working hand-in-hand to deal with the general public and dump toxic poison on us. We cannot afford to forget that government is a FOR-PROFIT operation. (After all, the government has invested in many top corporations.) It is government that forces the poisonous fluoridated tap water upon us, and we have spent a lot of time educating you about the dangers of water fluoridation.  This includes toxic fluoride but also heavy metals and other toxins such as lead. Lead doesn’t come from the leaching of lead pipes alone. Lead, aluminum, arsenic, mercury — just to name a few– are in the nasty raw fluoride product (the catalyst that is relative to the other elements) that is added to your drinking water every day! Government does not have time for public service, and it is NOT protecting us! Hello?! Government is not holding corporations back; instead, it keeps hurling its favored corporations forward. Government promotes the corporate agenda and has lawmaking authority to enforce those deadly policies!

Remember, the government controls most of the top corporations.

“While he was a Mayor, Jesse Ventura's city council wanted to raise $360,000 in taxes to cover a shortfall on their "city budget for schools." Ventura objected when he discovered the city owned $48,000,000 in idle investments funds from which the $360,000 could be drawn without raising taxes!”

How the biggest contractors are preparing for growth.

Many government contractors see their growth opportunities and have based their investment strategies.

Here is the 2015 Top 100 list of largest government contractors in the market.

Think about this:  why is government forcing fluoridation? And who are the players?  Keep reading…

This man, Lynn Mouden, has been working for BOTH government and corporate interests. Talk about conflicts of interests! Currently, Dr. Mouden is the Chief Dental Officer at the Centers for Medicare and Medicaid Services (CMS).

Lynn Mouden started his private practice dental career in Weston, Missouri in 1978. He ran that practice until May 1991 when he then took on a position as Associate Chief of the Bureau of Dental Health at the Missouri Department of Health and was there till October 1999. In that position, he was very active in forcing water fluoridation onto the people of Missouri. He also worked closely with Delta Dental of Missouri in developing the  national and international program called PANDA, Prevent Abuse and Neglect through Dental Awareness. PANDA trains dentists and other health professionals to recognize victims and family violence and report these issues to the authorities. Mouden moved to Arkansas in October of 1999 and took on the position of Director of the Office of Oral Health at the Arkansas Department of Health and held that position until February 2012. Lynn Mouden was also one of the Directors of Delta Dental at the same time he was Director of the Office of Oral Health at the ADH. This is a direct conflict of interest. Mouden moved to the Baltimore, Maryland area in February 2012 and took on the position as Chief Dental Officer at the Center for Medicaid and CHIP Services.  By the way, Lynn Mounded is still shown as one of the officers with Arkansas Oral Health Coalition according to the Arkansas Secretary of State.

At the same time that Lynn Douglas Mouden, DDS MPH was the Director of the Office of Oral Health for the Arkansas Department of Health, he was also one of the directors of Delta Dental of Arkansas Foundation as shown on the 990 IRS 2011 filing for Delta Dental Foundation.

ADH stated in a paper that they put out in 2001 that they were seeking to establish Hometown Health Coalitions in all 75 counties in Arkansas. They now have 86_ADH_Hometown Health_Improvement_Coalitions in Arkansas’ 75 counties. These coalitions are used to help spread ADH’s half-truths to the public. This was all with the assistance of Dr. Lynn Mouden’s wife, Sip Mouden, who was the Chief Executive Officer of Community Health Centers of Arkansas until September 2014. (The current CEO is Mary Leath.) Most of ADH’s information is coming from the Centers for Disease Control and Prevention (CDC) and is influenced by dentists.  “Fluoride Gate” deepens with the release of 2000 pages of FOIA Documents.

Mayor Perrin has been involved in both the banking and insurance industry.

“Perrin’s first job post graduation was with Aetna insurance company, a five-year stint working on retirement and pension plans, life insurance and annuities.”  Click_here to see the rest of Perrin’s bio. Remember, Perrin is one of the Directors of Delta Dental. Don’t you think that this might be a conflict of interest?

Another player pushing water fluoridation is ex-Senator and Fluoride Mandate Sponsor, David Johnson, who is running for district court judge for Jacksonville District Court and Maumelle District Court.  At the time that SB359/Act197 was  passed in 2011, David Johnson was using the flawed Pew Report along with the erroneous fluoride data from Lynn Mouden, Arkansas Department of Health’s Director of Oral Health, to support his case to pass SB359 in both houses.  In Sip Mouden’s (wife of Lynn Mouden) Lobbyist Activity Report that was filed in the second quarter of 2011, there was an Award Plaque gift listed that was presented to Senator David Johnson. Could this Award Plaque gift been for Senator David Johnson getting SB359 passed? Now, as the result of the fluoride mandate that Mr. Johnson got passed, we are left with state sponsored injustice…the poison fluoride mandate! Secure Arkansas does not want to see injustice served from the bench.

“Johnson previously worked as deputy prosecuting attorney in Pulaski County from 1998 to 2004, including work in the Jacksonville and Maumelle District Courts. In 2004, he was elected to the state House, where he served two terms before being elected to the Senate in 2008.”

Secure Arkansas feels that David Johnson would destroy the integrity of the justice system and would not be impartial or fair. In our estimation, he will consistently side with those who have backed his campaign throughout his entire political career. He simply cannot be trusted with this position!

Reminder:  David Johnson was the lead Democratic Senator Sponsor of the Fluoride Mandate bill SB359 in 2011. Pew assisted in this fluoride campaign with Lynn Mouden.

In the Fluoridation_Advocacy “Pew’s Contributions and Lessons That Emerge”, it states “State Senator David Johnson, the lead sponsor of the bill that became Act 197, told the Arkansas Times that Pew’s report inspired him to make a fluoridation law one of his legislative priorities in 2011. (Note: the flawed Pew Report was one of the erroneously reports that gave Arkansas an “F” that was used by David Johnson and  Lynn Mouden  to pass Act 197).

ADA stated that the PEW Report, released in February 2010, with the support of the Kellogg Foundation and the DentaQuest Foundation used incorrect data that gave Arkansas an “F” rating.  DentaQuest_Foundation is a for-profit subsidiary of Dental Service of Massachusetts which does business as Delta Dental of Massachusetts.

The flawed PEW report was used by Senator David Johnson and Senator Jason Rapert to convince the Arkansas legislators that fluoridation should be considered for the “greater good” of Arkansas. Out of the eight benchmarks used in the PEW report, the Arkansas State Dental Association (ADA) stated that two of the benchmarks are proven, effective means to improve oral health. The other six benchmarks are PEW’S Opinion with unproven efficacy. Out of the eight benchmarks, only one applies to fluoridation. ADA went on to say that they don’t agree with everything in the report as stated by Dr. Tankersley (former ADA President). This report was also about Medicaid funding. The Arkansas legislators were misled into believing that the PEW report was all about fluoridation. (This shows more deception in getting SB359 passed into law.) ADA stated the PEW report used incorrect data for Arkansas and that Arkansas should have received a “D” and not an “F”. ADA discredited the PEW report due to incorrect data being used.

State Sen. David Johnson, D-Little Rock, (left) and Jason Rapert team up to pass Senate Bill 359 on March 1, 2011 during a committee hearing on his bill to mandate fluoridation in public water systems serving 5,000 or more people. Rapert was actively involved in getting this bill passed on the advice of his dental campaign contributors and his clients. The committee endorsed Senate Bill 359. (John Lyon photo)

Secure Arkansas has witnessed first-hand Mr. Johnson’s underhanded sneaky tactics back in 2011 when the fluoride mandate bill (SB359) was propelled through both the House and Senate Committees on Public Health.  We recall both Senator David Johnson (D) and Senator Jason Rapert (R) making a spectacle out of themselves when they testified in favor of fluoridation before the Public Health Committee. Before the committee hearing started that morning, Senator Rapert knelt down and told Secure Arkansas not to demonize him for what he was going to do. We remember saying, what in the world are you talking about? Rapert explained that he was going to speak in favor of the fluoride mandate.  Later on that day, Senator Rapert stopped to talk to us in front of the Senate chambers. We inquired as to why he would want to mandate all Arkansans and to do such a terrible thing. We said, “Your name was not on SB359 as a sponsor, so why would you testify before the committee in support of the mandate along with Senator Johnson?”  His reply: “Because my clients asked me to!”  You see, Mr. Rapert was both a Senator and a financial advisor. Money talks, especially when it comes from from clients and campaign contributions! His pro-fluoride clients had ask him to team up with David Johnson for the fluoride mandate bill.  Yes, we were all sold out five years ago to be poisoned in our drinking water!  Sadly, SB359 went on to pass the House and Senate and was signed into law as Act 197 by Gov. Mike Bebee.

Be careful for whom you cast your votes!