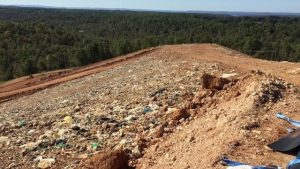 See this article in The Carroll County News.

On Friday, September 13, 2019 at 9:00 a.m, Ozark Solid Waste District Court-appointed Receiver from Little Rock, attorney Geoffrey Treece, will appear at the Carroll County Courthouse in Berryville, Arkansas, to argue for the case to be dismissed that challenges the unconstitutional trash tax/service fee (lack of jurisdiction) to be removed from the affected six-county area personal property tax statements. Defendants in the lawsuit are the solid waste district and Carroll County Tax collector Kay Phillips. The presiding judge in the Eastern District Court will be Hon. Scott Jackson from Berryville.

But the lawsuits do NOT need to be dismissed — they are necessary because they seek to have the assessments (trash tax/service fees) halted and for property owners who have already paid the assessment to be fully reimbursed.

So, Attorney Treece is FOR the bondholders and AGAINST the taxpayers.

Treece’s attorney, Mary-Tipton Thalheimer, filed this motion for dismissal in July 2019, after attorneys Matt Bishop and Wendy Howerton from Fayetteville filed an amended complaint earlier that month on behalf of plaintiff Paul Summers of Berryville.

It was Bishop and Howerton that filed the necessary original Carroll County lawsuit on Paul Summers’ behalf in May 2018, contending that the $18 assessment is, in fact, a tax and amounts to an illegal exaction. Secure Arkansas agrees!

A show of support is needed for the class-action lawsuit! Secure Arkansas is encouraging those affected by this illegal trash tax/service fee in those six affected Arkansas counties and who have had their personal property tax statements hijacked to please attend this hearing on Friday, Sept. 13 at the Carroll County Courthouse in Berryville, Arkansas. Most residents in that area fell victim to this caper and had this trash tax/service fee forced upon them!

This constant attempt from local government and the judicial system to extort the public for two years now regarding the illegal trash tax/”service fee” involving Baxter, Boone, Carroll, Marion, Newton, and Searcy Counties is still going on!

SOME HISTORY: The trash tax/service fee which burdened and shocked the taxpayers in those 6 counties was forcefully and illegally set in place to REPAY bondholders who had bought $12,340,000 in bonds issued by the solid waste district in October 2005 to finance the purchase of the North Arkansas Board of Regional Sanitation (NABORS) Landfill in Baxter County. (NABORS is an acronym for North Arkansas Board of Regional Sanitation.)

Remember, Bank OZK (formerly Bank of the Ozarks) is Trustee for the bondholders which means the bank is receiving the taxpayers’ money. The $18 trash tax/service fee was forced on the burdened taxpayers to cover the bondholders’ investment AND the ongoing landfill clean-up that will continue for over 30 years or more… because the tax fee is ALSO intended to pay Arkansas Department of Enviromental Quality (ADEQ) for costs this government agency will charge to close and clean up the toxic hazardous landfill! This is ridiculous! Sadly, the public are the ones being robbed to pay for the bonds! Looks like the government is holding the public responsible for criminal deeds of the private investors with this landfill.

To see all the federal regulations Secure Arkansas believes this landfill has committed, click here for a past article.

The illegal trash tax/ service fee was imposed in 2017 by the Ozark Mountain Solid Waste District’s court-appointed receiver, Geoffrey Treece, who is trying to recover $13.2 million or more after the Ozark Mountain Solid Waste Management District defaulted on bonds used to purchase the now-closed, hazardous Class 1 NABORS Landfill in northwestern Baxter County. These bonds were tax exempt junk bonds with no guarantee of payout to the bondholder through Bank OZK.

Doesn’t this appear to be premeditated?

Read Part 12 of our Extortion in Arkansas series here. We’re attempting to expose the players involved is this trash tax fiasco. You may recall:

It was former Senator Johnny Key who introduced Amendment No. 2 to House Bill No. 1040 which allowed the trash tax to be added to everyone’s property tax statement. Johnny Key (Mtn. Home) added Amendment No. 2 to the Arkansas Department of Environmental Quality Appropriation for the 2014-2015 Fiscal Year. HB 1040 was referred to the Joint Budget Committee which handles providing for consideration of appropriation bills and budget proposals submitted by the General Assembly. The Arkansas Department of Environmental Quality (ADEQ) and former Senator Johnny Key deceived the public trust with this political maneuver of using the Joint Budget Committee to create this fraud on the public.

Amendment No. 2 to HB 1040 appeared on page 21 of the bill.  Click here to see HB 1040 that was passed as Act 274. Section 45 was the part that amended HB 1040 to allow the Trash Tax. Former Senator Jeremy Hutchinson was the sponsor of Amendment No. 1 to House Bill No. 1040. (Former Senator Johnny Key is now Arkansas Commissioner of the State Board of Education.) Looks like when you play ball with the big boys, you get awarded.

Also remember — in one of the previous articles from Secure Arkansas that Attorney Geoffrey Treece was appointed by Judge Tim Fox.  Treece contributed at least $450 to Judge Timothy Fox the last political race for office, and Circuit Judge Timothy Fox has reported on his 2016 Statement of Financial Interest investments greater than $12,500 in the Bank of the Ozarks. Isn’t this some conflict of interest on the part of Judge Timothy Fox and Attorney Geoffrey Treece?    (Note: The Bank of the Ozarks is the Trustee of the bondholders. Also, on July 16, 2018, the name Bank of the Ozarks was changed to Bank OZK… What is up with this name change? Could it be that they are trying to distance themselves from ramifications of the pending lawsuits… and who knows what else?)

Here’s a mug shot of Geoffrey Treece who was booked into the Pulaski County Jail on March 28, 2015 with a charge for Domestic Battery 3rd Degree. Looks like these characters are pretty rough players!

A judge who presides over a case in which the judge (Fox) has a conflict of interest could face impeachment from the bench.  Where is justice in Arkansas?

*Please read this paragraph, dear reader. Looks like there is a big problem in our state legislature! Could these politicians, the judge, and the attorney listed below be possible bondholders in this scheme? If so, are they some of the people who could stand to benefit from the malevolent trash tax levied on the innocent taxpayers? Do you think we should investigate the investments of members of our General Assembly, since their legislative action is affecting our (the taxpayers’) pocketbook?

Owning stock aligns the interest of the firms with those of their stock holding politicians who implement the law. So, both the firm AND the stockholders benefit when lawmakers act in ways that benefit their investment portfolio! What this boils down to is this: the lawmaker can act as a lobbyist. Yes, in this trash tax case, we the people have fallen victim to a spread of a six-county-wide tax collection of taxpayer funds. This undermines public trust!

On the federal level: A good example to mention here is one of America’s largest industries — Big Pharma — because they have given a substantial amount of money to elected officials. Prices on prescription drugs have soared, and Secure Arkansas believes this has stemmed from the actions of our lawmakers!

Corporate money in politics is definitely complicated! Bank OZK (formerly The Bank of the Ozarks) is the Trustee for “the Bondholders”, and the following people listed below seem to have a conflict of interest. (Secure Arkansas thinks there are more legislators and players to be found). *Could they be possible bondholders?

The corruption keeps mounting … Stay tuned for the results of the hearing!

And PLEASE attend the hearing on Friday, Sept. 13 if you are able, and please help with getting the word out!