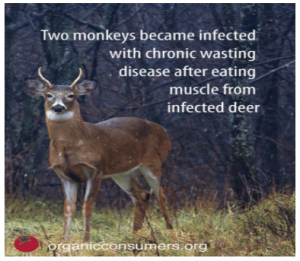 A new study has confirmed what we’ve all feared — chronic wasting disease could be passed to humans. Here’s what the CDC is telling deer hunters to do.

Transmission of Chronic Wasting Disease (CWD) in deer and other animals is concerning. The initial paragraph of the linked article reads:

Scientists believe CWD proteins (prions) likely spread between animals through body fluids like feces, saliva, blood, or urine, either through direct contact or indirectly through environmental contamination of soil, food or water. Once introduced into an area or farm, the CWD protein is contagious within deer and elk populations and can spread quickly. Experts believe CWD prions can remain in the environment for a long time, so other animals can contract CWD from the environment even after an infected deer or elk has died.

Why is this concerning?  Because prions are abnormal proteins that cause fatal nervous system disease.

Why is the nervous system important?  Because it controls and coordinates all organs and structures of the human body (according to Gray’s Anatomy, 29th ed, page 4) — thus affecting their function.

A quick summary: this IS a grave human health issue, dear reader! According to what we’ve been reading, it seems that all attempts to stop the spread of the deadly infectious disease, chronic wasting disease (CWD), have FAILED!

Here’s a quick excerpt on Chronic Wasting Disease — CWD Warning from the Federal Register below:

First, there is no live animal test for CWD, so it is impossible to determine whether a live animal is positive;

CWD may be transmittable through eating game meat.

There’s no known transmission of CWD from cervids to humans, the agency Health Canada said. However, a transmission path is now possible, according to preliminary findings that have not been peer-reviewed. The potential for CWD to be transmitted to humans cannot be excluded. The best approach is to consider that CWD has the potential to infect humans.

Since 1997, the World Health Organization has recommended that it is important to keep the agents of all known prion diseases from entering the human food chain.

The World Health Organization (WHO) has likewise advised that there is no current scientific evidence that CWD can infect humans. However, as a precaution, the WHO and the CDC strongly advise testing susceptible species harvested in known CWD areas and to not eat meat from CWD positive animals.

This deadly disease was discussed almost one year ago at Minnesota’s Capitol. See below. 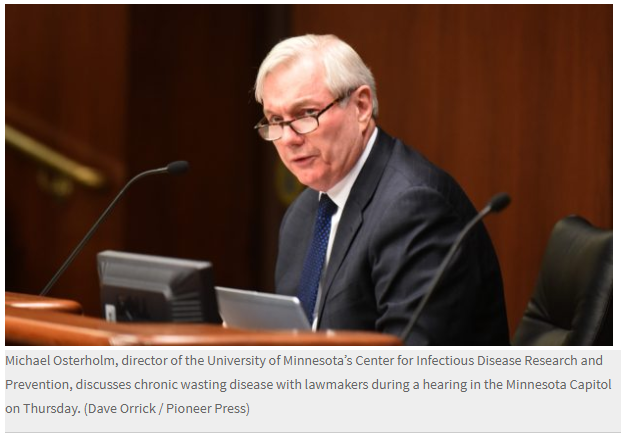 Michael Osterholm, director for the University of Minnesota’s Center for Infectious Disease Research and Policy, who sat on a panel of experts tracking the emergence of mad cow disease (or bovine spongiform encephalopathy, BSE), decades ago told lawmakers this:

“It is my best professional judgment based on my public health experience and the risk of BSE transmission to humans in the 1980s and 1990s and my extensive review and evaluation of laboratory research studies … that it is probable that human cases of CWD associated with the consumption of contaminated meat will be documented in the years ahead. It is possible that number of human cases will be substantial and will not be isolated events.”

Osterholm said he knows that skeptics will accuse him of stoking fear — and he did say this: “If Stephen King could write an infectious disease novel, he would write about prions like this.” But, he noted that for years, many in the public health and beef industry did not believe mad cow disease could infect people. In 1996, researchers confirmed that BSE (bovine spongiform encephalopathy) can infect people as variant known as Creutzfeldt-Jakob disease (vCJD).

Department of Agriculture Office of the Secretary Docket No. 01-019-1

The disease, which occurs mostly in adult animals, is progressive and always fatal. The origin and mode of transmission of CWD are unknown. The disease has become of particular concern due to its fatal nature, lack of known prevention or treatment, its impact on the farmed cervid industry, and its possible transmissibility to cattle or other domestic livestock and humans.

The denial from the government agencies that CWD is a problem to humans is misleading. This possibility of transmission of CWD to humans has the potential of destroying the domestic cervid (deer) industry. Do you think there is a cover-up?

If the representatives of Arkansas Game and Fish Commission (AGFC) are telling you that they are going to “breed out” the CWD infected deer, think again. The disease is still fatal! There are certain types of deer that do not succumb as quickly as others, BUT that means that they only get to live a little longer, produce more offspring, and have the potential to spread the deadly disease to more animals.

The federal government has quietly issued a warning that a progressive and fatal neurological disease affecting deer, elk, and moose populations in western Canada and the United States for decades might infect humans.

For years scientists thought that it highly unlikely that chronic wasting disease (CWD), a prion-caused disease related to Mad Cow, could be transferred to humans who eat venison. Prions are infectious, misfolded proteins.

But dramatic new research has challenged that thinking.

The Health Products and Food Branch of Health Canada now warns that the potential for CWD “to be transmitted to humans cannot be excluded.”

To be as safe as possible and decrease their potential risk of exposure to CWD, hunters should take the following steps when hunting in areas with CWD:

Our understanding is that, even if a cervid animal has been tested, it takes 18 to 24 months before symptoms can be detected in the cervid population (deer, elk, caribou, and moose), and there’s no way to know for sure that deer is safe to eat right now. Period!

According to the Arkansas Department of Health:

Is CWD dangerous to humans?

As a precaution, the CDC and Arkansas Department of Health recommend that people and other animals do not eat deer or elk that appear to have CWD.

Public health officials advise hunters not to consume meat from animals believed or known to be infected with CWD or any other disease. Since it’s not always apparent that a deer may be carrying a disease, hunters should take simple precautions.

Little is known about whether infected mammal parts pose a risk to the environment; researchers have discovered that prions readily attach to various elements in the soil and remain infectious for many years. Therefore, it is recommended that bones and other parts of the carcass of an animal suspected or known to have CWD be double bagged in strong garbage bags and disposed of at a lined landfill with an approved dead animal disposal area. AGFC also recommends, whenever possible, carcasses should remain near where the deer was harvested,

Reporter Dave Orrick mentioned in this article from the Pioneer Press:

The prions are nearly indestructible, capable of withstanding temperatures well above 1,000 degrees — and unlike viruses, CWD prions remain viable in the wild for years, sitting in the dirt, getting sucked up by plant roots and even just resting on inanimate objects.

In closing, Secure Arkansas is very concerned about CWD because all attempts to control it have failed, and it is rapidly spreading throughout our state. We encourage you to think and take precautions before you harvest and ingest your deer, and most of all, please keep in mind that the test results for $3.95 you send in are NOT conclusive because they don’t show “CWD free”… They only show “positive”, “not detected”, or “unsuitable”.

Once again: our understanding is that it takes 18 to 24 months before CWD symptoms can be detected in the deer or elk population, and cooking does NOT destroy the CWD prion, folks!

It would be foolish to discount the danger of an outbreak of this disease upon the human population.

Be sure to read the original article that Secure Arkansas wrote on December 11, 2019 about this CWD issue.

*NOTE: We will keep an eye on this topic because there is more to share. This situation is scary!  Yes, there will be Part 3 coming soon…