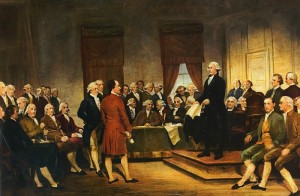 REMEMBER:  The U.S. Congress decides the mode of ratification.  The state legislators can be circumvented if the Congress calls for ratifying conventions.  For the evidence showing the inability of the States to limit an Article V Convention, click on the following link.

Background Info:  Yesterday, Senator Cecil Staton filed the Convention of States Project’s application in the Georgia Senate.  We’re going to have to work fast and make many, MANY calls and send many emails to GET THIS STOPPED!  It’s our understanding that this will go before the Senate very soon!

AGAIN, we MUST make calls and send emails IMMEDIATELY to stop this!  For several years, we have been emailing you many warnings about the dangers of a Constitutional Convention (Convention of States) a.k.a. Article V Amendment Convention.  The most recent was sent out on January 6, 2014 entitled “Propaganda & Article V”.  NOW is the time to take action!

Make sure you call and send each of the members on the Rules Committee an email telling them to vote “NO” on the Convention of States Application.

Thanks for reading!  Please remember to forward this email to everyone on your list.
Securing the blessings of liberty,
Secure the Republic
SecureTheRepublic.com
[email protected]