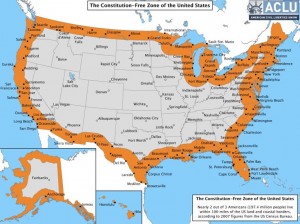 We ran across something that greatly disturbed us as we were researching illegal immigration.  U.S. District Judge Korman has decided that the border — the area 100 miles inland from the entire U.S. border — falls under a “border exemption” and is being called a “Constitutional Exemption Zone”… all in the name of “national security”.  People that are in this area are subject to being stopped and searched at random.  So, our Constitutional Rights are being SUSPENDED in the 100-mile Constitutional Exemption Zone?  Does this affect EVERYONE?  What does this all mean, and to what can it lead?  What is being planned for all of us in this ‘exemption zone’?

The Fourth Amendment is supposed to protect us from unreasonable search and seizure, including arbitrary and random stops and searches.

The right of the people to be secure in their persons, houses, papers, and effects, against unreasonable searches and seizures, shall not be violated, and no warrants shall issue, but upon probable cause, supported by oath or affirmation, and particularly describing the place to be searched, and the persons or things to be seized.

Within 100 miles of the U.S. border, however, these rules DO NOT apply.

Constitutional Exemption Zones are being implemented by the Department of Homeland Security.  It appears that this federal agency isn’t really securing the borders but are extinguishing the Fourth Amendment Rights of over 197 million people within 100 miles of the border… and the ocean?

Secure The Republic is very concerned about this new “Constitutional Exemption Zone”.  What is REALLY going on?  Most of our metropolitan cities fall within this area.  2/3 of Americans (197.4 MILLION people) will be affected by this.  These people could find themselves WITHOUT CONSTITUTIONAL RIGHTS.  If the 4th Amendment can be removed (the one which guards against unreasonable searches and seizures), so can the other amendments!   It appears that our borders are being eliminated and the sovereignty of our country is under attack.

This map from the ACLU is hard to beat because it shows the 100-mile “Constitutional Exemption Zone” visually, including cities which will be affected.  Take a look for yourself!  Pay special attention to the GREAT LAKES area.  We’ll comment more about that in the future… 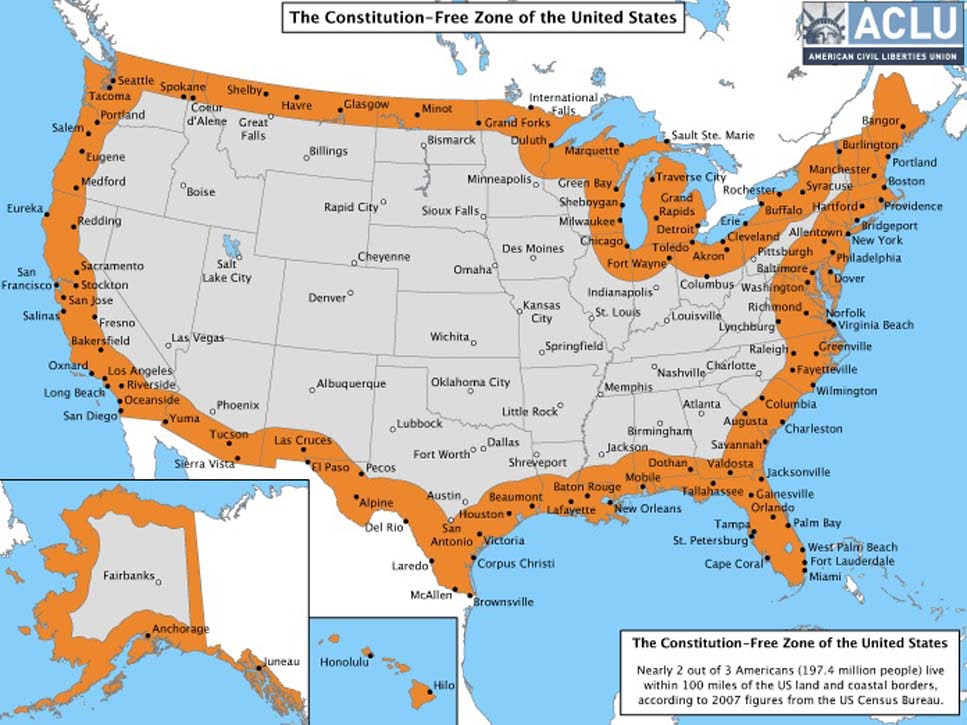 Border search exception law and legal definition  This is the Border Exception Law that is being implemented.  The power to conduct warrantless search is referenced under 8 USCS § 1357.  This is covered in the link.

Folks, this is not about border security.  Our borders haven’t been secure in MANY years.  This is about losing state sovereignty and our constitutional rights.  This includes dropping national borders. Remember, it’s a well-orchestrated plan that has been slowly coming together and will strip us of our constitutional rights.  You’ll find that proponents of these random searches and seizures make it sound good, but we need to know where their true motivation lies…  It appears to us that we are in a type of police state.

Also, study your state constitution.  You may find that it no longer describes the boundaries of your state, effectively abolishing your state.  At last check, the only states that still lay out their boundaries in their constitutions are:  Alabama, Arizona, Arkansas, Colorado, Florida, Idaho, Indiana, Iowa, Kansas, Nevada, New Mexico, South Dakota, Tennessee, Utah, Washington, Wisconsin, and Wyoming. Arkansas’ Constitution has been checked, and their boundary is found in Article I under “Boundaries”.  The description of the boundary for your state may be found in a different location than Article I in your particular state’s constitution.

When the State borders are no longer in the State Constitution, it is the signal that the State has lost its sovereignty.  WAKE UP AMERICA!  Is your state boundary being abolished?  Think about it another way:  would you buy a piece of property that has no legal definition?

In order to better understand this, you will need to obtain a copy of your present state constitution to see if your state legislature has removed the boundaries of your state.  The only way that these changes can be made is to change the state constitution and the U.S. Constitution.  The promoters of Regional Governance and a One-World Government know this.  It looks like STATE BOUNDARIES WILL HAVE TO BE ABOLISHED BEFORE REGIONAL GOVERNANCE and a ONE-WORLD GOVERNMENT CAN BE FULLY ENFORCED IN THE UNITED STATES.  Once this happens, there will be a centralization of power.  State boundaries have already been abolished in 33 of 50 states!

We wanted to make you aware of the dangers which we could face if we don’t abide by our U.S. Constitution, but you’ll need to do your own in-depth research on this topic.

Be looking for more information in the future from us, and please forward this email to everyone you know!