Our Rights To Free Speech Are Not Up For Negotiation

We were recently sent a proposed draft bill called the “Campus Free Expression Act” that is being considered in the Heartland.  Before this goes to any more states, it MUST BE STOPPED!

Nearly every time the legislators pass a bill, you lose a freedom or a right!  Please remember that statement – because the legislative session is about to begin (again) for most states!

The author of the proposed “Campus Free Expression” bill that went to several Heartland states based their SEC. 2 “RIGHT TO USE CAMPUS FOR FREE SPEECH ACTIVITIES”  on Supreme Court’s decision in Ward v. Rock Against Racism, 491 U.S. 781 (1989). This case arises from the city’s attempt to regulate noise (the volume of amplified music at the bandshell so the performances are satisfactory to the audience without intruding upon those in the vicinity).

This badly-written Unconstitutional bill must be scrapped. If you’re going to support free speech, then support it – don’t compromise it!

Listed below are the reasons why Secure Arkansas/Secure The Republic cannot support the “Campus Free Expression Act” draft a.k.a. “Free Speech Zone” in its current form.   We probably could’ve lived with the proposed bill if the changes suggested below were incorporated, but in our opinion, this bill should never have been proposed in the first place.

(The way Section 3 is currently written, the fine could apply either to the student OR to the institute.)

The Foundation For Individual Rights in Education (FIRE) is attempting to have the states pass a bill (shown below) to designate outdoor areas of public post-secondary educational institutions as traditional public forums open to free speech, and for other purposes.  Their current proposed bill is compromising and unconstitutional.  Keep in mind that legislation written with such a title as “Campus Free Expression” makes the bill APPEAR to support free speech and expression, but in reality, it turns out to accomplish the exact opposite of what you thought and hoped.  This proposed bill restricts First Amendment rights!  We must read such legislation CAREFULLY.

“Congress Shall Make No Law Respecting an Establishment of Religion, or Prohibiting the Free Exercise Thereof; or Abridging the Freedom of Speech, or of the Press; or the Right of the People Peaceably to Assemble, and To Petition the Government for a Redress of Grievances.” — First Amendment

“We hold these truths to be self-evident, that all men are created equal, that they are endowed by their Creator with certain unalienable Rights, that among these are Life, Liberty and the pursuit of Happiness.–That to secure these rights, Governments are instituted among Men, deriving their just powers from the consent of the governed…”

“All laws which are repugnant to the Constitution are null and void.”

“Where rights secured by the Constitution are involved, there can be no rule making or legislation which would abrogate them.”

“An unconstitutional act is not law; it confers no rights; it imposes no duties; affords no protection; it creates no office; it is in legal contemplation, as inoperative as though it had never been passed.”

“Censorship reflects a society’s lack of confidence in itself. It is a hallmark of an authoritarian regime…”
— Supreme Court Justice Potter Stewart, dissenting Ginzberg v. United States,
383 U.S. 463 (1966)

“Once a government is committed to the principle of silencing the voice of opposition, it has only one way to go, and that is down the path of increasingly repressive measures, until it becomes a source of terror to all its citizens and creates a country where everyone lives in fear.” — Harry Truman

“Experience should teach us to be most on our guard to protect liberty when the Government’s purposes are beneficent. Men born to freedom are naturally alert to repel invasion of their liberty by evil-minded rulers. The greatest dangers to liberty lurk in insidious encroachment by men of zeal, well-meaning but without understanding.”
— Supreme Court Justice Louis Brandeis, Olmstead v. U.S. (1928)

“Whoever would overthrow the liberty of a nation must begin by subduing the freeness of speech.”   — Benjamin Franklin

“I believe there are more instances of the abridgment of the freedom of the people by gradual and silent encroachments of those in power than by violent and sudden usurpations.”   — James Madison

The following proposed anti-freedom bill would allow the public education institutions to restrict freedom of speech by regulating the time and place of all assemblies.  You can be sure that these “Free Speech Zones” will be designated in small, out-of-the-way places.

Read the draft for yourself below:

To designate outdoor areas of public post-secondary educational institutions as

traditional public forums open to free speech, and for other purposes.

This Act may be cited as the “Campus Free Expression Act.”

SEC. 2. RIGHT TO USE CAMPUS FOR FREE SPEECH

[State] Constitution protect expressive activities including, but not limited to, all forms

maintain and enforce reasonable time, place, and manner restrictions in service of a

compelling institutional interest only when such restrictions employ clear, published,

expression. Any such restrictions must allow for members of the university

community to spontaneously and contemporaneously assemble;

permitted to do so freely, as long as their conduct is not unlawful and does not

materially and substantially disrupt the functioning of the institution;

enjoin violation of this act or to recover compensatory damages, reasonable court

a) the attorney general;

2) In an action brought under this Section, if the court finds a violation of this act, the

plus $50 for each day the violation remains ongoing.

after the day the cause of action accrues;

b) For purposes of calculating the one-year limitation period, each day that

act remains in effect, shall constitute a new violation of this act and, therefore,

a new day that the cause of action has accrued.

[highlight emphasis in the draft above, ours]

Call your state legislators and tell them NOT to support this bill in its current form.  It’s a bad bill and should be thrown out!  It’s vague, ambiguous, highly restrictive (especially Section Two), and unconstitutional.

Once again, if you truly want to support the First Amendment and pass protection of free speech, then the whole bill must be re-written; below is a start.

Public institutions of higher education shall NOT maintain and enforce any time, place, and restriction to Free Speech in any manner.  The First Amendment of the U.S. Constitution protects the freedom of speech which the campus of public institutions must do, also.

As we mentioned above, the Foundation for Individual Rights in Education (FIRE) is responsible for drafting the proposed bill, and here are a few names of those who have previously been associated with that foundation:

Federal Court has already struck down a highly restrictive Free Speech Zone established by the University of Cincinnati.  This is good for the university students!  Click here to see the court ruling.

ALL AREAS should welcome free speech, and we should not be boxed in or restricted.  However, there are still areas in which freedom of speech is not welcome…

Past examples of freedom of speech INFRINGEMENT: 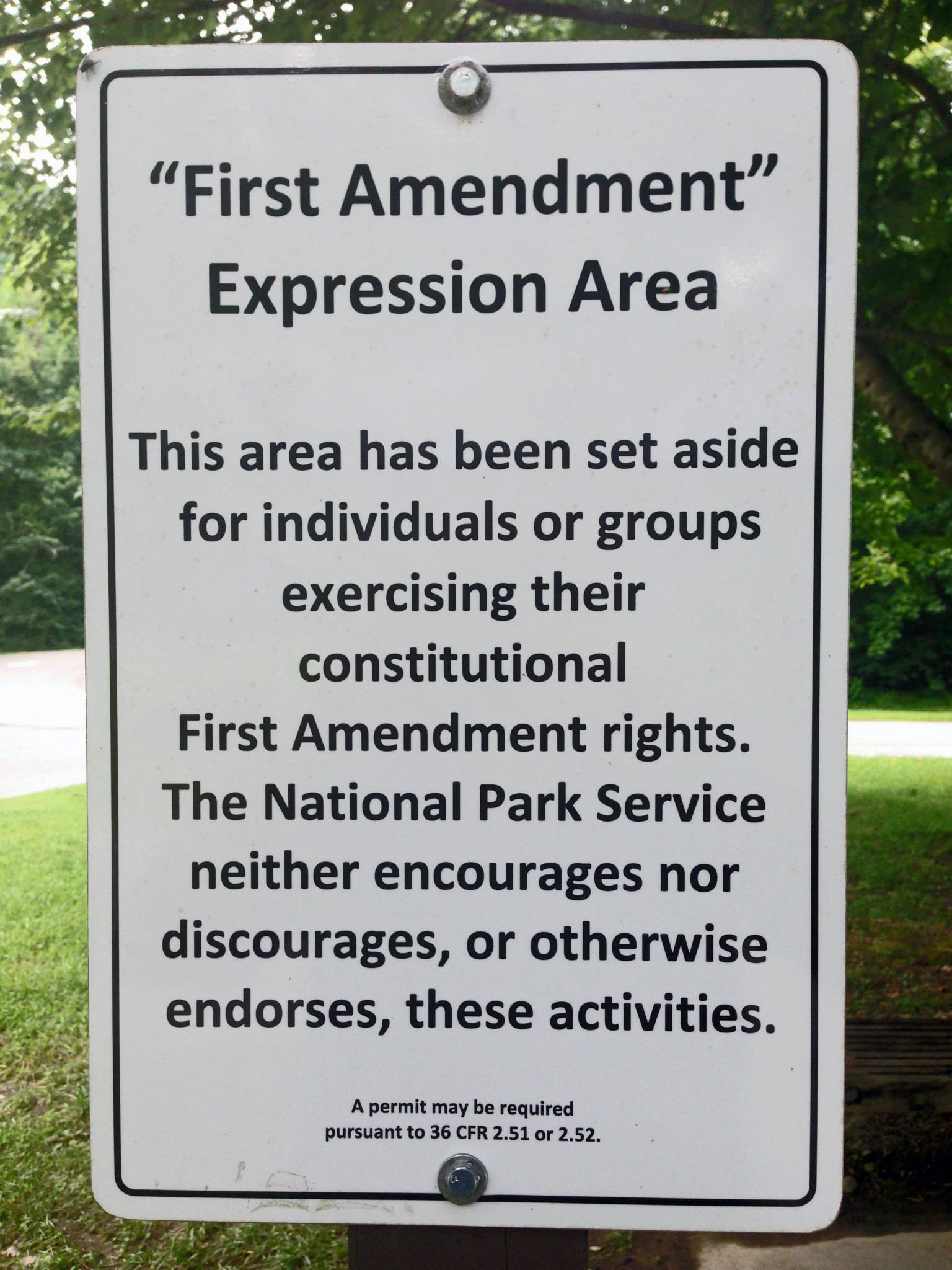 Did you notice the fine print at the bottom of the sign above?  You may need a PERMIT to exercise your right to FREE SPEECH!!  This is LAUGHABLE!

discrimination based on religion or belief

Do your own in-depth online search, and you’ll find that the United Nations is creating (or supporting) many different types of zones for all types of purposes.

Representatives in our Heartland, PLEASE do your own objective research before supporting this proposed bill.  Our First Amendment right is precious, and if we compromise on that, the Second Amendment could be in jeopardy, also.  Many representatives in the four-state area are being recruited to carry this nefarious bill.

The last we heard, these liberal organizations, sponsored by corporate America, are still pushing to pass this proposed bill in its current form.  Our rights to free speech are not up for negotiation!

So, do you want Americans to be restricted and forbidden to speak even more?

We should not subject our college students to this type of control.  This is NOT what America is all about!  Do NOT give these institutions or government agencies the ability to silence free speech, or none of us will be secure!  We must not compromise our First Amendment.