CDC misleads legislators about fluoride’s kidney effects. Is it a cover-up?

If you support local water control, then that would mean you would repeal Act 197 (the fluoride mandate). If you’re a water operator: think for yourselves before you add toxic fluoride to the drinking water! Read the important article below, contributed by a Secure Arkansas supporter. 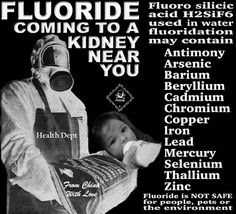 Emails released through freedom-of-information requests reveal that at least two members of the U.S. Center for Disease Control’s Oral Health Division have private worries about fluoride’s risks to kidney patients but publicly deny any concern.

Artificial fluoridation began in 1945, aimed at teeth, without considering how unnatural fluoride chemicals could affect other body functions or population subsets, such as kidney patients. CDC says, “The safety and effectiveness of fluoride at levels used in community water fluoridation has been thoroughly documented…” But, William Maas, (former CDC Oral Health Division Director) admits, “There is a lot of uncertainty,” regarding fluoride’s effects to kidney patients in a May 2011 email to ADA Director of Congressional Affairs, Judith Sherman, (a registered ADA lobbyist). Cc’d is William Bailey, then acting Director of CDC’s Oral Health Division, who responds: “End stage renal disease may be another issue. Since the body excretes fluoride through the kidneys, it is reasonable to assume that people with end stage [renal] disease may experience a buildup of fluoride.” Bailey also mislead the Fairbanks, Alaska,city council in 2008 claiming studies he listed proved fluoridation’s safety and effectiveness when they didn’t. Now working with the PEW-funded Campaign for Dental Health, formed to protect and promote fluoridation, Bailey told the Loveland (Colorado) Utility Commission on November 19, 2014: “I believe that fluoridation is a healthy practice…It is not associated with any negative health effects,” according a Loveland newspaper.

In 2012, the National Kidney Foundation withdrew its support of water fluoridation citing the 2006 National Research Council (NRC) report indicating that kidney patients are more susceptible to fluoride’s bone and teeth-damaging effects. The NRC reports that the kidney-impaired retain more fluoride and risk skeletal fluorosis (an arthritic-type bone disease), fractures and severe enamel fluorosis, which may increase the risk of dental decay. More specifically: “Human kidneys… concentrate fluoride as much as 50-fold from plasma to urine. Portions of the renal system may therefore be at higher risk of fluoride toxicity than most soft tissues.” p.280 “Early water fluoridation studies did not carefully assess changes in renal function.” p.280 “future studies should be directed toward determining whether kidney stone formation is the most sensitive end point on which to base the MCLG [EPA’s maximum contaminant level goal allowed in water].” p.281 “The effect of low doses of fluoride on kidney and liver enzyme functions in humans needs to be carefully documented in communities exposed to different concentrations of fluoride in drinking water.” p.303 “Thus, more studies are needed on fluoride concentrations in soft tissues (e.g., brain, thyroid, kidney) following chronic exposure.” p.102

In 1980, a toxicologist, Brian Dementi, with the Virginia Department of Health wrote in his ignored report, “Where the kidney is concerned persons with impaired kidney function may suffer from acute fluoride toxicity when consuming water containing as little as 2 ppm fluoride.”

Dementi writes, “In discussing the effects of fluoride upon the kidney, it seems appropriate at this point to indicate that whereas the kidney fulfills the important task of removing toxic substances, such as fluoride, from the system. There is the consequent danger of fluoride intoxication in those individuals with impaired renal function who ingest fluoride… It is evident that fluoridated water poses an enhanced threat to those among the populace who have impaired kidney function.”

In 1990, the New York State Department of Health published a study, “Fluoride: Benefits and Risks of Exposure,” alerting officials that fluoride can be harmful to kidney patients, diabetics and those with fluoride hypersensitivity even at “optimal” levels. More study was advised; but ignored. Without this vital information, government bureaucrats continue to claim fluoridation is safe. The National Kidney Foundation’s (NKF) former fluoridation position statement also carried surprising cautions. The NKF advised monitoring children’s fluoride intake along with patients with chronic kidney impairment, those with excessive fluoride intake, and those with prolonged disease. But NKF now admits, “exposure from food and beverages is difficult to monitor, since FDA food labels do not quantify fluoride content.”
The USDA lists fluoride content of common foods here.

The NKF’s April 15, 2008 statement goes further: “Individuals with CKD [Chronic Kidney Disease] should be notified of the potential risk of fluoride exposure… More than 20 million Americans have CKD, and most don’t even know it. More than 20 million others are at increased risk for developing CKD,” NKF reports.

The American Dental Association, in its Fluoridation Facts Booklet, reports that “decreased fluoride removal may occur among persons with severely impaired kidney function who may not be on kidney dialysis.” According to Schiffi in the Journal Nephrology Dialysis Transplantation, “a fairly substantial body of research indicates that patients with chronic renal insufficiency are at an increased risk of chronic fluoride toxicity.” Ibarra-Santana, et al. report “patients with renal disease presented more severe dental fluorosis [white spotted, yellow, brown and/or pitted teeth] than children without renal disease, in the Journal of Clinical Pediatric Dentistry. Bansal, et al. in Nephrology Dialysis Transplantation reports: “Individuals with kidney disease have decreased ability to excrete fluoride in urine and are at risk of developing fluorosis even at normal recommended limit of 0.7 to 1.2mg/l of fluoride in drinking water.” Ng, et al, report in the journal, Bone, their research suggest that “in ROD [renal osteodystrophy], bone fluoride may diminish bone microhardness by interfering with mineralization.”

Researchers report “that drinking water fluoride levels over 2.0 mg/L can cause damage to liver and kidney functions in children and that the dental fluorosis was independent of damage to the liver but not the kidney, published in Environmental Research. According to a 1975 editorial in Kidney International, “Trace doses of fluoride leave the blood within minutes, concentrating principally in bone and kidney…”

Tell your legislators that not everyone in the community can drink fluoridated tap water!