WARNING to Carroll Boone Water District Board and ALL of Arkansas 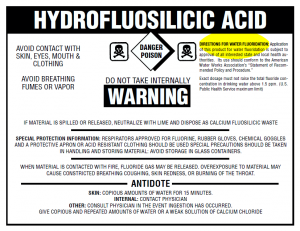 The Mission Statement of the ADH is:

If this were true, ADH would neither allow fluoride to be released into our environment nor expose us to hazardous waste material via our drinking water!

Secure Arkansas would like to share a comment with you that Andy Anderson submitted to the Harrison Daily Times.  Mr. Anderson is the Chairman of the Ozark Mountain Regional Public Water Authority (OMRPWA) which encompasses eighteen water plants in that area.

The people deserve to know the truth about the Fluoride that is added to their water supply. The majority of people think it is an approved drug and is pharmaceutical grade. It is not. It is a toxic hazardous waste by-product of the fertilizer and aluminum industries. Politicians are paid off with various donations by lobbyist for those industries to pass forced fluoridation laws so they will have a way to dispose of the waste. Then not only do they not have to pay cleanup costs; they actually sell it to water systems who feed it to the uninformed public is small doses.

I first began to learn about the bad effects of Fluoride prior to 2008 when ADH had several of our member entities under administrative or warning orders to do something to remove the fluoride from their water supplies because it was bad. We used that information to gain funding for the OMRPWA project so that these people would have a water supply that did not contain fluoride and other contaminants. Suddenly ACT 197 is passed in 2011 and then ADH said that fluoride was so good, it should be in everyone’s water.

Carroll Boone Water District is scheduled to begin adding this toxic soup to Harrison’s water supply on Wednesday July 15. Wouldn’t you like to know exactly what is being put into your water? Where is a valid study that shows it to be safe to all people regardless of age or physical condition? Where is a valid study that shows it is effective in its stated purpose of preventing cavities? Strange that neither is available, yet we blindly accept endorsements from ADA and AMA that “it is good for you”. Endorsements not scientific studies! The FDA has never approved fluoride to be ingested. Brush, rinse, and spit; do not swallow. “If more than a pea sized amount is swallowed contact poison control immediately.”

Andy Anderson just recently said that “their water drains into the Buffalo National River”; so if fluoride is added, shouldn’t there be an environmental impact study done in our state regarding the harm fluoridation is causing?  If this mandate is not halted, we predict that you will see more endangered species declared in our streams, creeks, and rivers!  This will affect landowners!!!

From a recent article by Becky Gillette (found here):

There are concerns that if these districts located in the Buffalo River watershed are forced to fluoridate, most of the fluoride will end up in the Buffalo River where there are concerns about it damaging aquatic life. Reviews of scientific literature published on PubMed.gov indicate “fluoride toxicity to aquatic invertebrates and fishes increases with increasing fluoride concentration, exposure time and water temperature.”

“About 99.95 percent of our water is not consumed by people,” Anderson said. “It is all flushed down the drain and goes into the Buffalo River. I don’t know why the environmental people aren’t involved in this. In Madison County, 85 percent of the water is used in poultry industry. The fluoride is going into the meat of birds. While some meat is sold locally, a lot goes to foreign countries. One of these countries that has banned fluoride will wake up someday and say, ‘We aren’t going to buy this meat with fluoride in it.’ Chicken producers need to be up in arms about this.”

Anderson said new reports are coming out all the time about the buildup of fluoride in food and the harm over-fluoridation is doing to health. CDC studies have shown 41 percent of children in the U.S. have teeth damaged by too much fluoride causing dental fluorosis.

And just in case you missed it, here’s what Jeff Stone, director of engineering with the Arkansas Health Dept. said about adding lead into our drinking water.  Unbelievable!

Concerned residents, YOU SHOULD KNOW WHERE THE FLUORIDE COMES FROM THAT IS ADDED TO YOUR DRINKING WATER!

In Arkansas, the Ozark Mountain Regional Public Water Authority, Watson Chapel, Madison County, and Marion County have NOT been fluoridated yet.  Unfortunately, the Carroll Boone Water District has recently caved in and agreed to fluoridation set for Wednesday, July 15, 2015 start date, despite heated protests from their customers in Eureka Springs and Harrison.  Many people are believing for a miracle to stop this sinister action…

It is time to let your voice be heard in your own area.  Have you called your own water department with your objections to fluoridation?  You should, and be sure to tell them that you object to being medicated without your consent!  We do not think that ingesting toxic waste from the phosphate industry is beneficial to your health!  Manufacturing phosphate does create air pollution, so why are we letting the state add this dangerous chemical to our clean drinking water?  The phone number or email address is on your water bill, so please get busy and contact them!

Secure Arkansas advises you to join with us and others that are opposing this malevolent deed of fluoridation so we can stop this malicious harm that is being done to humans, animals, and plants in our beautiful state.

The Carroll-Boone Water District Board approved the construction of the fluoride treatment plants and awarded the bid to L.E. Davis Construction of Harrison.

ACTION:
Contact the Carroll-Boone Water District plant and request that they DO NOT turn on fluoride at their location on Wednesday, July 15, 2015!

Here are the Carroll-Boone Water District Board of Directors:

**Attention CBWD Board Members: Please consider reading the three Material Safety Data Sheets below!  Yes, you can STOP or DELAY the fluoridation start date!  And consider the international warning as well.

The Center for Disease Control and Prevention International Chemical

The  three types of Chemical Fluorides used in water fluoridation of water supplies are:

Secure Arkansas has listed the article below in addressing crimes against humanity. Countries all over the world have BANNED FLUORIDE, the latest country being Israel. Why? Denmark and Sweden banned fluoridation when government panels found insufficient evidence of safety, and the Netherlands banned water fluoridation when “a group of medical practitioners presented evidence” that it caused negative effects in a percentage of the population.

Principles of International Law Recognized in the Charter of the Nu?rnberg Tribunal and in the Judgment of the Tribunal

Principle I
Any person who commits an act which constitutes a crime under international law is responsible therefore and liable to punishment.

Principle VI
The crimes hereinafter set out are punishable as crimes under international law:

(c)  Crimes against humanity:
Murder, extermination, enslavement, deportation and other inhuman acts done against any civilian population, or persecutions on political, racial or religious grounds, when such acts are done or such persecutions are carried on in execution of or in connection with any crime against peace or any war crime.

Based on the Nuremberg Principles, whoever puts the fluoride in the water supply is directly responsible and legally liable.

You must say NO to any crime against humanity. NEVER OBEY an UNLAWFUL ORDER.

All Water Boards across the state: Under the Nuremberg Principles, you have an obligation NOT to follow the orders of leaders who are perpetrating crimes against peace and crimes against humanity. We are all bound by what U.S. Chief Prosecutor Robert K. Jackson declared in 1948: “The very essence of the [Nuremberg] Charter is that individuals have international duties which transcend the national obligations of obedience imposed by the individual state.” At the Tokyo War Crimes trial, it was further declared “Anyone with knowledge of illegal activity and an opportunity to do something about it is a potential criminal under international law unless the person takes affirmative measures to prevent commission of the crimes.”

Surprisingly, one of the main reasons the Ozark Mountain Regional Public Water Association was formed was to combat naturally-occurring fluoride levels in the rural water districts. Andy Anderson made a statement to the districts saying, “It makes no sense to add fluoride when they were previously mandated by the health department to reduce toxic levels of fluoride.”

Did you get that?  Anderson is saying that they had a previous order to reduce dangerously high levels of fluoride in the water… but once the 18 systems had consolidated into one water authority, the health department issued a mandate that they add fluoride to their drinking water because they serve over 5,000 customers collectively!  That makes NO sense.