Urgent!  Our Water Rights and Property Rights are at Stake Under the old Obama “Waters of the United States” (WOTUS) Rule!

We wanted you to see that Newton County Quorum Court passed the resolution in Newton County, Arkansas, on June 5, 2017 regarding “navigable waters” and President Trump’s Executive Order 13778.  (We’ve included the signed resolution in the body of this alert below.)

IMPORTANT:  Each county in Arkansas needs to pass that resolution to support President Trump’s Executive Order, if you don’t want the Feds having jurisdiction over every puddle and ditch on your private property.

Again, we must stand up for our water and property rights!!  We are including the blank resolution so you can print it off and bring it to your county judge or justice of the peace before June 19, 2017.  It must be approved by the county government to provide input to the Environmental Protection Agency so that EPA can rewrite the WOTUS rule supporting President Donald Trump’s Executive Order 13778.  This is a no-brainer for consideration, but you must act fast!

The general public MUST contact their County Judge and/or Justice of the Peace to make sure the elected officials are proactive regarding our Water Rights during this window of opportunity!  A special session for the Quorum Court may still need to be called by the JP’s.

ALSO, BEFORE JUNE 19, 2017, state and local governments need to submit substantive comments stating their position on the definition of “navigable waters”  to EPA staff at [email protected].gov . June 19, 2017 is the end of the comment period!  Our elected officials need to require that the EPA and U.S. Army Corps of Engineers withdraw their proposed rule regarding the definition of “Waters of the U.S.”  (State and local governments include county judges, justices of the peace, state representatives, and state senators! They need to get involved, and they will need to email their own comments to the EPA and make sure to contact Governor Hutchinson and ask him to comment on this extremely important water rights issue this week! This comment period for submitting opinions to the EPA is for government officials only. Stand up, and let the EPA hear from YOU! )

The Obama rule allowed the EPA to decide that “navigable waters” can mean nearly every puddle or every ditch on private property or any other place that the EPA determines. This is not what the private property owners want, it’s a HUGE overreach, and it is up to the elected officials to support this resolution and roll back EPA’s power over water and private property that should not be under their jurisdiction!  This is America; not some dictatorship country.  It looks like they are using control over the water to control private property (land).

The Environmental Protection Agency released its final rule last week defining “waters of the United States” (WOTUS), a measure that hugely expands the ability of this aggressive agency to disregard the conservation efforts of American states and interfere with the daily lives and property of the American people.

This is the United States Senate Report “From Preventing Pollution of Navigable and Interstate Waters to Regulation Farm Fields, Puddles and Dry Land: A Senate Report on the Expansion of Jurisdiction Claimed by the Army Corps of Engineers and the U. S. Environmental Protection Agency under the Clean Water Act”.  If you read this report, more than likely, you will find it very disturbing.

Shown directly below is the resolution passed in Newton County, Arkansas.  Resolutions need to be passed in ALL of the other counties in Arkansas, as well – as soon as possible! 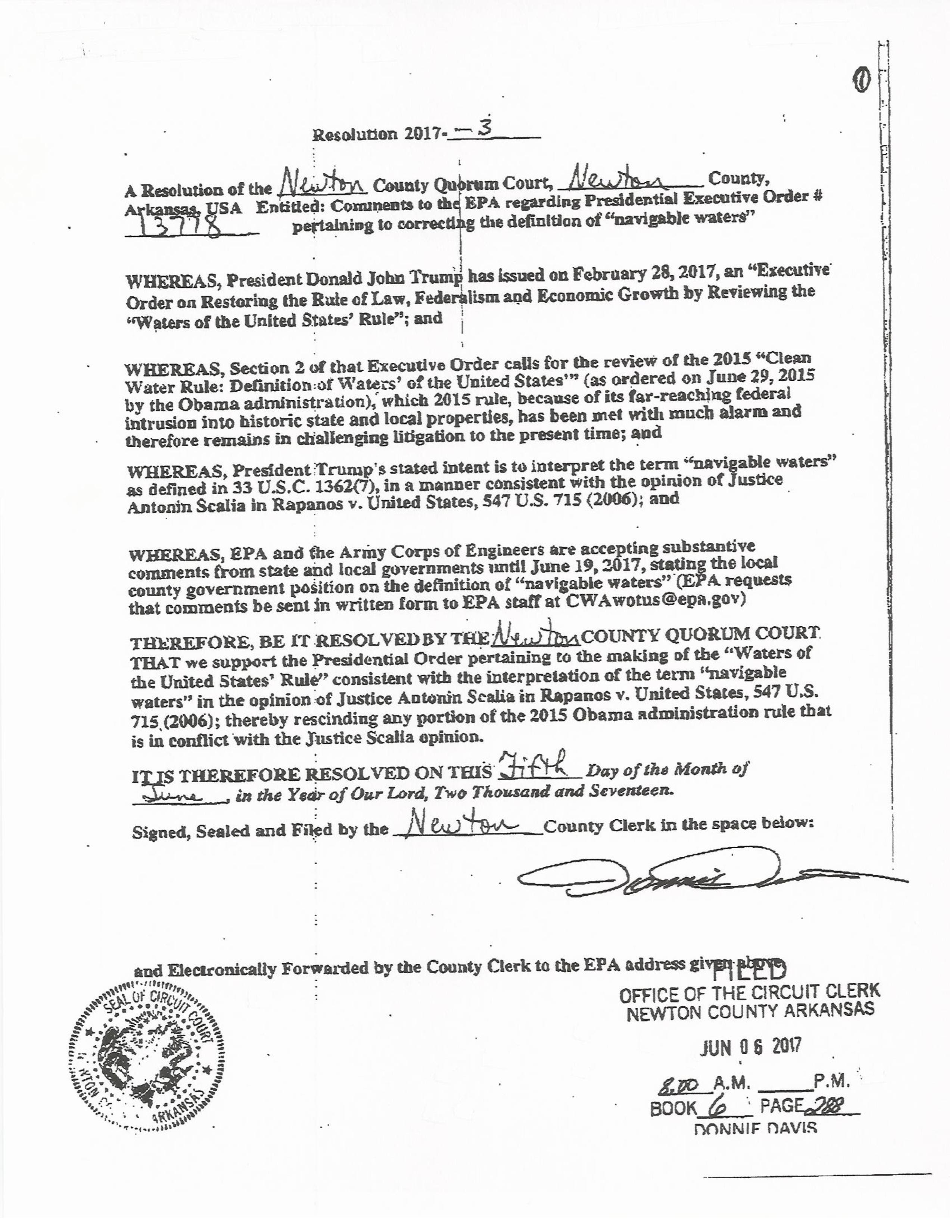 Thank you for all your help in contacting our local elected officials. Get involved locally!  This needs to be placed on a FAST TRACK IMMEDIATELY!