Three Supreme Court Decisions have ruled clearly and emphatically that your right to vote consists of TWO parts: 1) the Right to cast a ballot, i.e., put a paper ballot into a ballot box; and, 2) Right to KNOW that your vote was counted accurately. We still are allowed to cast a ballot, but we HAVE NO IDEA if our ballot is being counted accurately or not on these mysterious, secret, computerized programs. In fact, you will see that these Supreme Court decisions make secret computer counts illegal, precisely because no one can see what’s happening inside the election computer. Click here for the excerpts from the three supreme court decisions on the right to vote and the right to have their vote counted.

The crippling year 2020… of COVID-19, lockdowns, job/ business loss, masks, looting, rioting, destruction of property, fraudulent elections, and now the hazardous vaccines that still await Americans and those in other countries!  Talking about upheaval released across the world… We may be still bleeding and trying to recover, but we must stand up now! How many times do we have to be slapped around, bloodied, and abused before we can recognize this same sadistic pattern?  Hang in there, precious reader! Yes, we CAN run and not be weary, we CAN walk and not faint.

We need to know what happened in this coup d’etat fraudulent election that has stunned and concerned the people in this country! Hopefully, people are waking up and can see what we’ve been dealing with all along.

Can we ever have a fair election, or will we continue to act like a third world country? The integrity of our American elections has been greatly compromised. Corrupt algorithms designed to crash our votes, switched electronically! Can we recover economically? Why is the media not covering information at the White House properly? What next — will we be discussing what happened to those we love that will have severe reactions to the experimental vaccines that many think is the answer to all Americans’ problems?

Secure Arkansas will mention the weapons of warfare that are used to bring about socialism/communism in this article. In government, communism will aim to stop most forms of political dissent, but socialism predates communism (the Communist Manifesto). Socialism requires the redistribution of wealth and can even call for the state to take control over what is produced.

Yes, private foreign companies CAN change the outcome of elections around the world! Globalists/ Internationalists have been working hard on their evil agenda to rig and interfere with the outcome of elections. No country is exempt. See more on this communist coup that has been happening this year… because it has a malevolent history that can be tracked! From Worldview Weekend Broadcast Network: Voter Fraud 2020 and The Attempted Communist Coup

1) Election Fraud.  Smartmatic and Dominion: Electronic Voting Systems with Socialist Origins. See Chart Below! (See Globalist Lord Malloch-Brown, Chairman to Smartmatic. Looks like he has ties to Dominion. George Soros’ Open Society and the Clinton Foundation also has ties to Dominion prior to 2016. THESE VOTING SYSTEMS (election technology and voting machine manufactures) NEED TO BE BLACKLISTED! Don’t you think? 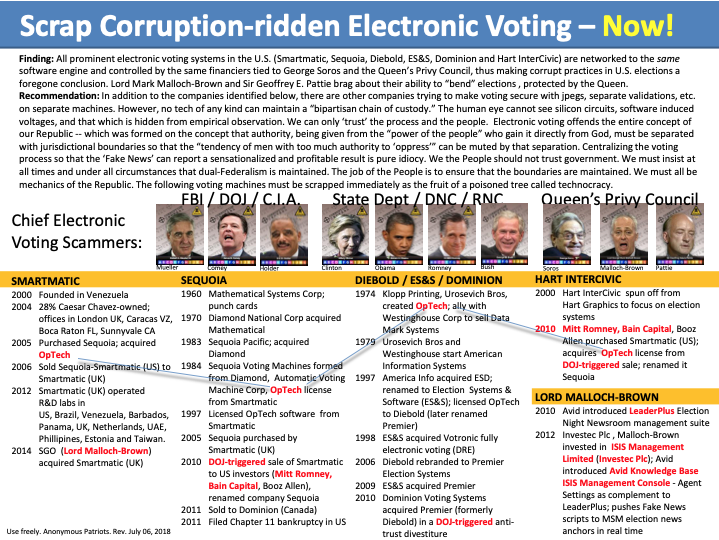 3) World Healthcare Policies. The World Economic Forum (See book by Klaus Schwab, “Covid 19: The Great Reset”… Yes, they are pushing UN Agenda 2030 in our face!) It has been used as an excuse to destroy and lockdown our country, called “The Great Reset”. Many government officials and the CDC have walked all over people and our Constitution. Oppressive regulations and enslavement like this can only come from a tyrannical world government. Has America lost her sovereignty?

There is a worldly agenda going on that most people do not even have a clue about… transpiring right before our eyes. We were warned that our western lifestyle (or economy) is “unsustainable”, so the radical globalists will hold to this threatening agenda that will transform our country from the inside out, including a great culling of humanity.

One of the players in this “Great Reset” is The Intergovernmental Panel on Climate Change (IPCC), an intergovernmental body of the United Nations that’s based in Geneva. They project that between the years 2030 and 2050, climate change will cause 250,000 additional deaths per year. More diseases, heat stress, and starvation. The estimated cost to health is 2 to 4 billion per year by 2030.

They will make America undergo an extreme shift, a peculiar new value system known as “sustainable consumption” will be urgently required. Our food supply will suffer because they say that “farming” leads to climate change. Farmers will be highly regulated and told what to grow and how to grow it, for instance. Crops and livestock in great danger, folks. When Arkansas starts seeing our rice production go down, then this state will surely be in trouble.

United Nations Agenda 21 was MANDATED, know as an action plan. It didn’t matter which political party was in control of the White House; Sustainable Development stealthily moved forward under a thousand points of light. Now the demonic UN Agenda 2030 is set in motion…

This year, Secure Arkansas has warned and written a lot about the risky and potential deadly vaccine soon to be released.  Many of us are aware that Big Pharma has money to make and will conspire against us.  Remember that the AstraZeneca vaccine has human aborted fetal cells in the serum, and some of the companies like Pfizer and Moderna contain mRNA technology.

Here’s a must-read article for everyone to read over before a decision is made by you about the vaccine.  Only you can decide to make this suspicious verdict for your family to be subjected to this unsafe and ineffective vaccine.  There will be no turning back after the injection. Results are NOT in yet.  It’s an experimental technology invented to be deployed on the fearful and unsuspecting public.  This could kill many human beings, and the side effects will be massive.

Government officials, the CDC, drug companies, and manufacturers can make all the claims they want to because they will NOT be held liable in the end.  CDC isn’t what it appears on the surface is the fact that this supposed government agency is listed in the official Dun & Bradstreet (D&B) directory as a for-profit corporation. Yes, there IS a depopulation agenda, dear reader.

Today, 6 media giants — COMCAST NBC UNIVERSAL, Disney, CBS, Viacom, News Corporation, and AT&T — now control 90% of what we read, watch, or listen to… also known as FAKE NEWS.  Yes, we’ve been hit by a lot of psychological propaganda this year. The deep state run by the CIA and central banks are evil forces operating in this world.

We at Secure Arkansas recommend the following alternative news sources: