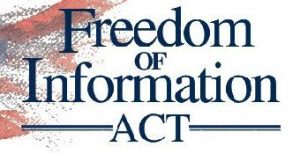 Secure Arkansas wanted to alert our readers about a FOIA request that was recently sent to the Fayetteville Public School District via Attorney Joey McCutcheon, Attorney Chip Sexton, and also Professor Robert Steinbuch.

The Freedom of Information Act (FOIA) is a law that provides the public the right to request access to information from:

Remember… It’s still our legal right to request information via FOIA! We have had the Arkansas Freedom of Information Act (FOIA) for over 50 years! It is one of the most comprehensive pieces of legislation regarding open-records and open-meetings law in the country! (Arkansas still serves as a model for the other states.) Let’s keep it that way.

On June 25, 2021, Attorney Joey McCutchen, joined by Attorney Chip Sexton and Professor Robert Steinbuch, a co-author of The Arkansas Freedom of Information Act (considered by most attorneys to be the definitive treatise on the Arkansas Freedom of Information Act) filed suit in Washington County Circuit Court against the Fayetteville Public School District on behalf of Fayetteville citizen Ila Campbell.  The Complaint, brought under the Freedom of Information Act (“FOIA”), arises following two separate FOIA requests submitted to the Fayetteville Public School District (“FPSD”) requesting, in part, the District’s equity plan, documentation regarding Critical Race Theory, LGBTQ policies and gender support plans, use of the word “Christmas,” and the Converge Social Justice Consulting Firm.  When the FPSD refused to respond to six clearly identified items, the lawsuit was filed.

In regard to the request for the six items, FPSD responded:

“With respect to your request for records under this item, the District has reviewed your request and determined that it is not sufficiently specific to enable the custodian of the records to locate the records with reasonable effort, given that there are over 1,500 staff email accounts. Please consider narrowing this request to include only the District Leadership Team.”

Attorney Joey McCutchen said, “FPSD is playing games and simply avoiding and evading the FOIA by trying to force Ms. Campbell to limit her FOIA request for public documents.”  McCutchen also said, “as noted in the Complaint, the Arkansas Supreme Court has made it clear that an entity required to produce public records cannot escape that production by claiming that the response would be broad and burdensome.”  The lawsuit notes that the records are available but the FPSD just don’t want to make the effort to produce them.

McCutchen concluded by saying “FPSD behaves as if it owns the governmental entity and that the public works for it – not the other way around.”  The lawsuit is filed in front of Circuit Judge John Threet and seeks a hearing to be held within seven days.

A copy of the complaint is attached. [It may be viewed here.]