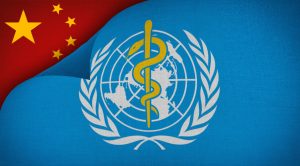 The United Nations has a bad case of Covid-19 corruption

Your healthcare as it’s known today is in jeopardy… and the U.N. World Health Organization is attempting to take it over!

Are you aware that the venomous World Health Organization (WHO) has proposed a shocking “Pandemic Treaty” that is being forced through all channels of power right now? This puts America’s national sovereignty and constitutional rights in great danger! Other countries are in the same great danger unless we — all humanity — can push back with overwhelming opposition immediately.

Here are the malignant NEW World Health Organization (WHO) Amendments which would build on the previous ones from 2005. They will be secretly rushed through and voted on May 22-28, 2022! These devastating amendments were quietly submitted by the United States on January 22, 2022 and would give authority over our national health sovereignty to the World Health Organization (WHO) through the World Health Assembly to be updated and implemented by the International Health Regulations (IHR).

Here are a few points from the above proposed, harmful new WHO amendments that we wanted to bring to your attention:

*Special Note from the 3rd bullet point above – World Health Organization (WHO) Director, Tedros Adhanom Ghebreyesus, has strong ties to Bill Gates, the Clinton Foundation, Dr. Fauci, China, and genocide, as noted in Secure Arkansas’ article from May 2020 entitled “COVID-19 Cesspool of Corruption… and Some of the Players“. These unprincipled villains continue to prey upon humanity. Tedros portrays himself as a kind, humble man… so it’s shocking to learn that his political career “began at the politburo of the Tigray People’s Liberation Front (TPFL), a terrorist organization of the Tigray minority ethnic group (6% of the Ethiopian population), listed in the U.S. Homeland Security Global Terrorism Database for a series of kidnappings, bombings and armed robberies.”

Download and read this 2005 document on International Health Regulations (IHR)! The new 2022 World Health Organization Amendments would update the older version of 2005. Unfortunately, the United States signed on to the freedom-robbing International Health Regulations back in 2005 of the 58th World Health Assembly (with Resolution WHA58) under the traitorous George W. Bush Administration. The older resolution was unanimously approved in May 2005 by all member states (countries) of the World Health Assembly. This era of the Bush Record was destructive. Regretfully, these dreadful NWO regulations supersedes and overthrows our U.S. Constitution! (George Bush Senior often spoke of the New World Order and his son, George W., certainly helped carry out the Skull & Bones’ wishes.)

This latest and nasty New World Order power grab should cause great alarm! Our health and our lives are in danger, dear readers. We do NOT want to give the World Health Organization (WHO) the power to decide what a pandemic is or what drugs will be used in matters regarding our health. (Remember how worthy drugs like Hydroxychloroquine and Ivermectin were demonized the last two years?) Beware of forced injections and vaccine passports.

Immediate Attention Right Now! Before Memorial Day, the World Health Assembly will convene once again May 22-28, 2022 for their 75th meeting in Geneva, Switzerland to have these threatening new amendments above voted on at this time. If these skulking amendments pass, then they will become international law!!!!

What can we do?

ACTION ALERT: Call your federal delegation, our U.S. Senators and Representatives, in each state immediately. It’s mandatory that they get notified on the dangers happening with the new WHO Amendments in May of 2022 at the World Health Assembly! Let them know how you feel about this coup d’etat by the World Health Organization (WHO), and make sure your U.S. Senators and U.S. Representatives receive and read these two documents: the International Health Regulations from 2005 and the new WHO Amendments to the 2005 International Health Regulations from 2005. It’s imperative that these malicious amendments DO NOT get adopted in Geneva. The amendments should be seen at once by Congress and the federal delegation in each state.

Here is the contact information for the federal delegation in Arkansas:

District 2- Rep. French Hill  [email protected]  Note: RINO French Hill is a special global player because he is a Congressional Representative to the United Nations General Assembly (appointed by Joe Biden) and provides legislative authority for U.S. engagement in the United Nations… so EVERYBODY needs to call or contact him because of his status with the U.N.

And EVERY state needs to call their U.S. Senators and Congressmen!

If these new WHO Amendments pass, then our health and welfare is threatened. The future of our health continues to be discussed, and arrangements are being made for every human being that is still alive after this life threatening and crippling vaccination/ injection campaign. Long before the so-called pandemic in 2020, the NWO players schemed, plotted, and set their trap for the whole world. Oh, how they all conspired! Here’s another link.

Warning! The serpent is coiled and ready to strike! The death-blowing treaty is due to be signed in May 2024 in Geneva, Switzerland involving 190 countries in which if ANY pandemic is declared, of any kind, then the World Health Organization (WHO) takes over our global health sovereignty. So our health sovereignty would be signed away by this legally binding treaty and the World Health Organization (WHO) would be in charge of all world health of sovereign humanity to do with us as they will. Unless we oppose this treaty, ANY emergency would give them power to suspend human rights.

The Treaty on Pandemic Prevention, Preparedness and Response has a intergovernmental negotiating body that is supposedly taking comments at this time so it can be written up, but right now, we NEED to pay attention and focus on the new amendments above because they will be voted on shortly… in May 2022.

Here are links to the International Negotiating Body (INB) working group and their Global Preparedness Monitoring Board.

Here’s a list of delegates from the participating countries involved in a World Health Organization (WHO) Special Session in December 2021.

Also, listed below are the monstrous delegation from the United States that are selling us down-the-drain:

Do NOT underestimate what is going on behind our backs! We better demand and make sure that the United States’ delegation stays true to our national sovereignty and our personal freedoms.

The serpentine behaviour of the private foundation of Bill & Melinda Gates, George Soros, and the other like-minded devils have their own twisted private death agenda, along with Big Pharma. Sovereign governments alone should be dealing with our health.

Will we be like lambs to the slaughter, or should we take immediate action?

The World Health Organization is part of the United Nations and is attempting to take over and control all health worldwide. This is a violation of each country’s sovereignty, and we already know that there’s a depopulation agenda. It is time that the United States stops funding this corrupt World Health Organization (WHO). Former Attorney General Jeff Sessions believes that the WHO has become more concerned with spreading political correctness and communist propaganda rather than stopping dangerous diseases.

You can read Part 1 of our article here.

Stay tuned, and be sure to contact your federal delegation ASAP!