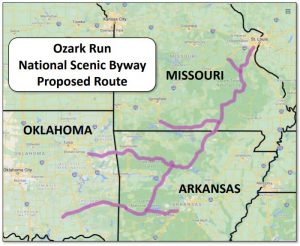 Attention residents in Missouri and Arkansas: Heads up!

Here we go AGAIN. This is another Huge Land and Water Grab attempt in the Ozarks!

Call it what they may, do not fall for this or approve it. The predatory Department of Interior has been waiting to start this land grab process again, this time under a new name “Byway”.

First, some local history: You may remember the White River Watershed National Blueway land and water grab attempt in 2013 which was put on hold… Well, they’ve waited almost 10 years, and now they’re back, trying to propose the land and water grab as a scenic byway. They’re starting with Missouri first and will work incrementally into Arkansas and Oklahoma.

Here is the Missouri Application and Corridor Management Plan from the Missouri Department of Transportation Initiative (102 pages) submitted by Eric Hermanson, Scenic Missouri. Email Eric at [email protected] or call 314-540-1533.

Within the yellow circled area below is the full area that they want: “the Ozarks” is part of a unique geological uplift that starts in St. Louis County and extends all the way to the Texas border.  The whole region encompasses almost 70,000 square miles, roughly the same size as New England. That’s a chunk of land and water taken out of the heartland! 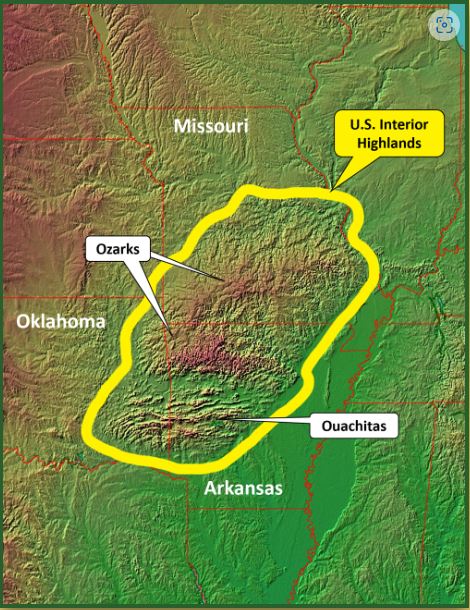 The Ozarks extend across five states: Missouri, Arkansas, Oklahoma, Kansas, and Illinois, but the majority of the region falls in Southern Missouri and Northern Arkansas.  See the map below for the proposed affected area in Missouri. 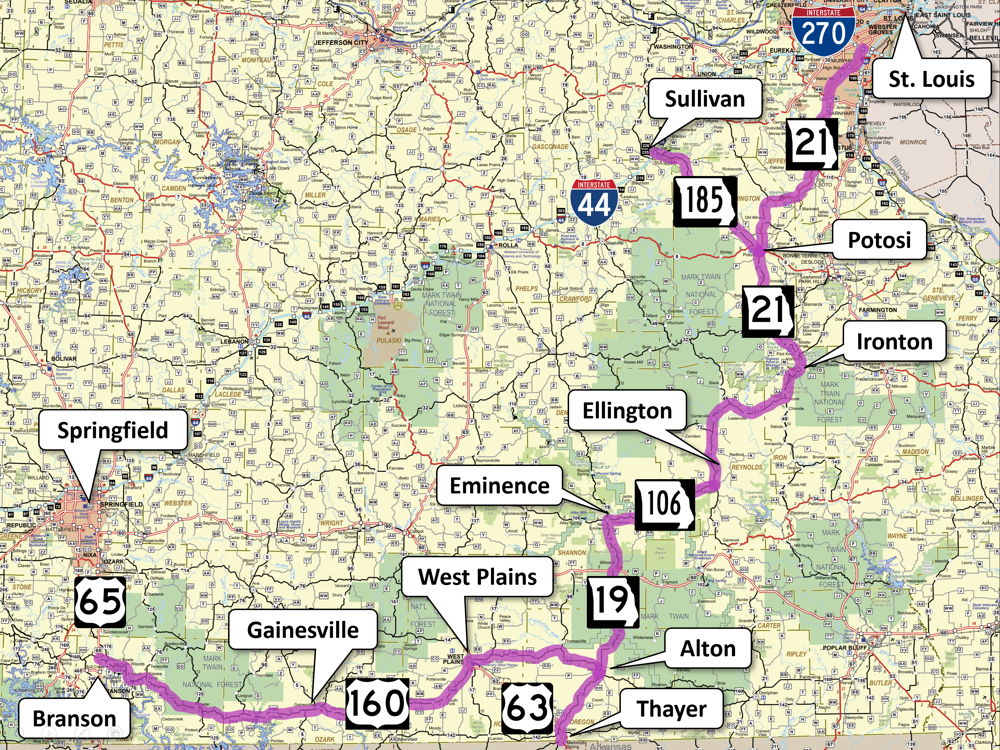 This time, the federal government is calling this ruthless land grab the Ozark Run Scenic Byway. It sounds lovely, of course… and the area is absolutely beautiful! But this is all about control. The government is counting on acquiring a LARGE portion of land in the beautiful Ozarks of both states and even Oklahoma, one way or another.

This is a clear and present danger… a sudden attempt to take control of the Ozarks!

This is a dangerous proposal for designating a scenic byway across the Missouri Ozarks. The government wants this proposal to be a ‘legal’ action and is trying to sneak it by the public. If this scheming proposal goes through, we believe there will be a swift acquisition of property or right-of-way in ways that many people will have a hard time understanding. Once the manipulated designation is made, that will be just the beginning of our struggles. They’re not stopping with just Missouri. Keep reading, and further down, you’ll see the bullet point in yellow highlight that mentions the route.

Land grabs eventually result in the displacement of our local people, which is detrimental to our human rights and freedoms. Many locals have lived there all their lives, and this will affect generations of families.

We need to stop this travesty. People all over the world are being forced out of their homes and off their land at an alarming rate, and we cannot sit by and allow it to happen here.

Did you know that the United States has been losing more than an acre of farmland every minute? If this doesn’t end soon, there could be food shortages.

We may think that because we live in America that this couldn’t happen to us… but our government has turned on its people and is untrustworthy.

Lake of the Ozarks is already in deep trouble: it is managed by Ameren Missouri, a public utility holding company which will follow the directives of the United Nations Sustainable Development Goals. Ownership: as of 2017, Ameren shares are mainly held by institutional investors (the dreaded Vanguard group, BlackRock, State Street Corporation, among others). The malicious BlackRock controls most of  the money flow and is the largest asset owner in the world, founded by the powerful and malevolent Larry Fink, and sadly, they even has a hand in the finances of the United States.

BlackRock owns 90% of the world’s media, let alone the pharmaceutical companies. They own the banks they should be regulating. This spectre haunts Wall Street.

Back to Ameren, go to their website, and you will get a clue as to what you are in for in the future. Here are the Ameren subsidiaries.

Do corporations have more power than governments? Sure looks like it. BlackRock is the most powerful company that has ever existed and growing their wealth everyday, as they go about buying up land and our houses. We are living under socialism for the rich and powerful.

Due to this byway proposal, at some point, you can bet private property ownership will be affected, too. The sticky spider web is spun and awaiting you to walk into the deadly trap… unless you can see the tightly spun web.

Here’s a snippet of the Missouri proposal from the link at the top of this article telling us where the proposed route will run:

The Ozark Run Scenic Byway will start in St. Louis, head south to the St. Francois Mountains, cross the Ozark National Scenic Riverways, head west past Bull Shoals Lake, and end near Branson. This 375-mile journey through small towns and wilderness will link together many natural and scenic highlights in the state, ad provide access to numerous recreational opportunities. A scenic byway of this magnitude will help to unite communities and organizations around a common mission: bringing the world’s attention to the Missouri Ozarks – a supremely beautiful, yet largely overlooked territory in the heart of our nation.

Here’s what the proposal says about the route:

Here’s the federal government corridor management plan for Missouri, and it shows how the government plans to seize control of the land should this proposal go through under the guise of “public right-of-way”. This will immediately affect 11 counties in Missouri.

Here’s a snippet from page 61:

Does “corridor” refer to private property along the proposed byway?

“Corridor” commonly refers to the public right-of-way and the area adjacent to the roadway that possesses any of the intrinsic qualities. This may or may not include everything that can be seen from the roadway. The community and the local government define the corridor that best fits their byway’s important features. However, existing laws cannot be changed without local government approval.

Careful… this is NOT as benign as it sounds. Once the initiative goes through and it gets designated a national “Ozark Run Scenic Byway”, then we may have more to lose than you think. We need to protect our property rights and freedoms.

Important document! Here’s an older 2019 viewshed fact sheet/ pdf that shows the restrictions that will be put in place after the designation of a Scenic Byway. Read carefully! In their stated purpose, they want to assure MAXIMUM PRESERVATION. Plan on conflicts to arise… Unfortunately, Scenic Corridors shall be protected according to the terms of Scenic Easements.

The Scenic Viewshed Protection Overlay District (SVPOD) is intended to preserve, protect, and enhance the scenic resources of designated scenic byways within the County. This district places additional standards on uses in order to protect identified intrinsic qualities, scenic features and other characteristics of designated byways; reduce visual intrusions that are not compatible with such qualities and features; assure that new development, redevelopment or infill is compatible with the scenic resources and intrinsic qualities of the district; and encourage conservation design techniques and strategies that position buildings outside scenic viewsheds or minimize impacts to such viewsheds.

So, what’s their multi-year plan? The information below is from the Missouri Department of Transportation Initiative, page 76. Note Year One in their chart: “Start Arkansas designation process”. Immediate Action Needed! In Missouri, YOU MUST contact your federal delegation AND your state lawmakers quickly! Time is short. Tell them to WITHDRAW this imposing initiative. Also, you can email Missouri Governor Michael Parson here. Do it now.

Also, all of these stakeholders need to be talked to about the damage they have done. Hold them accountable.

Here’s the KY3 article from August 19, 2022. Missouri residents, tell your state lawmakers what you think about this! They are asking.

Some state leaders want to know what you think about renaming some of our state’s most scenic roads. They want to take several Missouri highways and turn them into a new byway. The hope is to get more tourists.

We understand the need for economic support and tourism in the beautiful state of Missouri, but we don’t appreciate this land and water grab being put forth under the false pretense of hoping to get more tourists. They might lead you to believe it’s for tourism, but they can stop it all in a heartbeat. There is such a thing as withdrawal of public lands. Remember: the Sustainable Development slogan is a commanding: NO HUMAN FOOTPRINT. Eventually, a lot of people could be relocated.

There needs to be a LOT of negative feedback about this byway from you to your state lawmakers ASAP!

Here is a list of greedy stakeholders (working or trying to make points for the global elite). They are selling us out and have expressed support for this global devastating project where local people will be left out:

Be sure to vote these players out!

Important to know! The Chamber of Commerce is affiliated with the International Chamber of Commerce (ICC) that promotes a One/New World Order and works closely with the United Nations (UN). Can you see why we are in trouble? They love proposals such as this Ozark Run Scenic Byway. CITY OF BRANSON, please pay attention here!

One final question: Was an Economic Impact Statement properly done for this proposed byway?

They’ll be after Arkansas next, so we might as well start emailing and calling our Arkansas legislature as well. Let them know what’s going on and what to expect and that we DO NOT want this scenic run byway in Arkansas.

Missouri, Arkansas, and Oklahoma will be greatly affected. Below, see the proposed route from page 60 of the Missouri Application and Corridor Management Plan from the Missouri Department of Transportation Initiative. 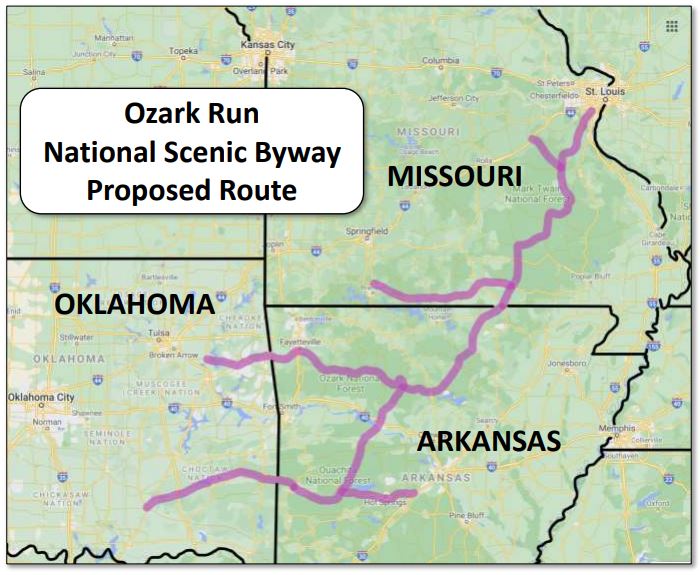 In closing, we do not want to forget to contact Secretary Deb Haaland of the Department of Interior. (She’s also Chair of the New Mexico Democratic Party.) She needs to hear your negative feedback about this proposed byway.

It’s imperative that you pass this information along as quickly as possible! We are the guardians of the Ozarks, protecting it and keeping it out of the hands of the federal government in every way. Do not secede control. The consequences can be dire.

This article was quickly put together, and we’ll write more on it later…