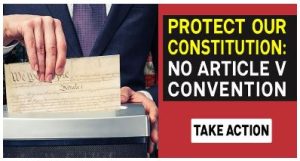 Mark Meckler’s Convention of States (COS) board members drafted a New Constitution for Gun Control.

From the COS draft “The Progressive Constitution” document under the second amendments, the changes proposed are as follows:

We offer our thanks to Judi Caler who has written a subsequent and enlightening article entitled “Bluffing Their Way to an Art. V Convention, Part 2: The Best Money PR Can Buy″ which you can click to read here. (It’s a .doc file that will be downloaded to your computer.) If you don’t want to download it, it’s also included in its entirety below. (We emailed and posted Part 1 on our website on December 2, 2022.)

Legislators, it’s especially critical that you also read the article below right away. We realize it’s the holiday season and many of us are with family and friends. It’s our freedom to gather as we do, not just at this time of year but always. We need to secure that and our other precious liberties. It’s incumbent upon us all to help safeguard our historical U.S. Constitution and freedoms that so many have fought and died for since its founding.

We wish all of our readers a blessed holiday season, and we pray you enjoy your precious time with family and friends.

Bluffing Their Way to an Art. V Convention, Part 2:
The Best Money PR Can Buy

In Part 1, we saw that ever since 1907, 2/3 or more of the States have had at least one active application on record asking Congress to call a convention under Article V. And if Congress is hoodwinked into validating all non-rescinded applications by passing H.R.8419 or its 2023 counterpart,[1] Congress will likely trigger the first constitutional convention since 1787.

So why wasn’t Congress deceived into calling a convention 50 or 100 years ago? Perhaps it’s because the PR industry hadn’t come of age yet! To justify a “call,” Congress, whose priority is getting re-elected, would require considerable constituent pressure—or the appearance of such—before casting a vote that would risk our Constitution.

Enter Mark Meckler, President of the Convention of States (COS), who has been waging a PR war with millions of dollars in dark money for almost a decade. COS is creating the impression that Americans are demanding a “convention of states” under Article V, while most Americans have no clue what an Article V Convention (A5C) is.

In 2011—while Meckler was still with the Tea Party and just getting involved in the convention deception, he joined Eric O’Keefe’s John Hancock Committee of the States (JHCOS) as a Director and President. O’Keefe is known as the front man for the Koch brothers’ money. He is also Chairman of the Board and co-founder of Meckler’s Citizens for Self-Governance (CSG)—parent to COS.

In its 2011 IRS filing signed by Meckler, JHCOS reported over $1.8 million in anonymous contributions (pg. 1), and almost one million dollars in expenses to public relations & lobbying firms (pg. 8).[2] At least 38% of the contributions can be traced to Donors Trust, the “dark money ATM” of the Right.

Hmmm—right out of the gate, almost $2 Million in seed money; pricey PR and lobbying firms; and $180,000 per year for Meckler by 2013, which appears to have started in mid-2012—well before Meckler introduced his first A5C application. Moreover, two members of the Council on Foreign Relations (CFR)[3] —Robert P. George and C. Boyden Gray—have been on Meckler’s Legal Board of Reference since its inception in 2014. That isn’t exactly how a grassroots organization gets started!

Petitions. A sophisticated computer has been spinning numbers representing alleged signers of COS petitions for years. But when Meckler was confronted with fake signatures in Idaho a few years back, he admitted (@ 1:28:00) that he can’t guarantee who signed, whether they remember that they signed, or whether they changed their mind since they “signed.” Indeed, it’s a mystery why half of Meckler’s “army” hasn’t bothered to sign at all![4]

Nevertheless, Meckler gets away with claiming he has “an army of 5 million” supporters nationwide, and boasting about tens of thousands of supporters at each Legislature he visits. That’s twice the size of China’s army! And Meckler doesn’t bother to prove his numbers; nor is he usually questioned about them publicly.

Polls. COS commissions polls which proponents claim show bipartisan support for a “convention of states”—a complicated, little-understood issue—from data collected in a one- to three-minute robo-call, text, or phone survey. But COS polls don’t measure public opinion. COS commissions “push polls” to sway public opinion. PR firms and private pollsters design polls to get the response their clients pay for. The result is often published as News. Outcomes are manipulated by the questions asked.

Meckler simulates pressure from below by touting his “army” and convincing Republican legislators that they’re putting their jobs on the line, should they oppose his “grassroots” legislation. In addition, pressure from above, exerted by lobbyists and leadership, can be intense—including threats of running primary opponents against incumbent holdouts. This leaves too many Republicans shaking in their boots with visions of Meckler’s army knocking on doors to defeat them at the next election.

Name-dropping. For lack of a sound argument, Meckler resorts to reckless name-dropping when he’s among Republicans:[7]

And this is an irrefutable fact. In the United States of America today, every single nationally-known conservative, law professor, talker, politician, who has taken a position—nationally known—on the convention of states is in favor. There are no exceptions. Rush Limbaugh, God rest his soul, Levin, Hannity, Beck [since reversed], Shapiro, all the professors I’ve named on our legal advisory board; there are NO exceptions… —Meckler, Roundtable discussion, Harrisburg, PA Nov. 8, 2021

COS has courted big name endorsements since 2014, and Meckler has admitted he’s willing to pay for them. In this 30-second clip from 2019, Meckler tells his fans that he tried unsuccessfully to get Rush’s endorsement, knowing it would have cost $2.25 million just to start negotiations!

Apparently, Meckler has managed to convince—or buy—a few dozen well-known politicians, pundits, and public figures. And we don’t know if COS endorsements are a result of direct payments, payroll, paid advertising, or something else, because COS expenses are lumped together on financials in broad reporting categories like “advertising and promotion” and “fees for services,” with most recipients anonymous.[8]

Still, from the little COS must disclose, we know that COS Action (COSA) bankrolled former US Senator Tom Coburn (turned COS lobbyist) to the tune of $240,000 annually for a combined total of almost one million dollars in 2016, 2017, 2018, & 2019. The 2017 link also shows former US Senator and COS endorser Jim DeMint as a paid COS lobbyist, raking in $140,000. Former US Senator Rick Santorum, who replaced Coburn, admits he was formerly opposed to an A5C. Not surprisingly, Santorum’s appearance as an endorser on the COS website coincided with his being added to Meckler’s 2021 payroll.

Posthumous Endorsements. Meckler apparently conjured up Justice Antonin Scalia’s support after Scalia’s death. Scalia’s opposition to a constitutional convention was a matter of public record from a 2014 interview. But Justice Scalia’s body had scarcely gone cold when Meckler broadcast that Scalia supported an Article V Convention, based on law professor Scalia’s published comments from 1979. That was seven years before Justice Scalia’s 30-year tenure on the bench, during which he changed his mind. Neither Rush’s nor Scalia’s support for an A5C appeared on COS’s endorsement page while they were around to speak for themselves.

As it turns out, the “grassroots momentum” behind COS is smoke and mirrors. The total number of States with non-rescinded applications on record today, is the same as the 2012 total (39). So, if we were to judge by the validation scheme [9] built into H.R.8419, COS has made no progress in the past decade! That’s because as many states rescinded their applications as passed new applications since 2012.

But bluffing works only by deceiving the uninformed. Please share this article and PART 1 with your State Legislators and members of Congress.

[1] The 2023 bill# will change, but the content will probably remain the same.

[3] CFR sponsored “Building a North American Community,” which promotes integrating Canada, the US, & Mexico politically and militarily. To move the US into the North American Union, they need a new constitution.

[4] At this writing, Meckler claims an “army” of 5 million while his computer shows 2.4 million “signatures.”

[6] E.g., after 7 years of trying, NE passed the COS application in 2022 by suspending a Senate rule and trading votes: “I’ll vote for your bad legislation, if you’ll vote for mine.”

[8] Form 990 requires that only the 5 highest-paid independent contractors receiving over $100,000 be reported.

[9] H.R.8419 is only the latest deceptive validation scheme advanced by the con-con lobby. Prior attempts have gone from declaring victory to the absurd.

In closing, we want to remind you that the Convention of States endorses gun control. Here’s the article we wrote about that in January 2022.

Yes, Washington DC is a cesspool of corruption, and the political players in the Deep State are found in both the Democrat and Republican Parties.

Also, here’s a story from the deceptive Epoch Times that is sadly promoting a devastating Article V Convention. In it, the Epoch Times mentions that the Article V of the Constitution is fail safe if the states want to put a stop to Washington DC when it’s out of control… but that’s NOT true! Using the words “fail safe” when something is NOT fail safe is misleading and a lie. This needs to be brought to your attention because the misinformation in The Epoch Times article needs to be refuted.

Here’s the truth:  The delegates will have plenipotentiary powers to do whatever they want, once a convention is convened… so, that means we would kiss our Constitution good-bye. Secure Arkansas has addressed this in several articles in the past, like this one.

The Deep State minions aren’t going to fix the Deep State… and Mark Meckler IS the Deep State, along with his buddies like Rick Santorum (as mentioned in The Epoch Times article).

We are disappointed that The Epoch Times has written such a misleading article. It looks like they’ve sold out to the controlled opposition, but we need to hold fast to our Constitution as it stands. Controlled opposition puts out information with a lot of truth… along with a trace of deadly rat poison.

We do NOT need an Article V Convention.