Electronic Voting Machines are Corrupt to the Core 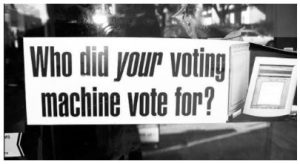 Have you seen how Germany, Finland, Italy, Ireland, AND the Netherlands have become the standard for clean elections? They ruled that the vote count must be something the public can authenticate, so they stopped computerized voting and threw out the machines!

Our elections have been rigged behind closed doors because we have allowed them to be outsourced to a few corporations that carry their own private software programs for elections. Can we trust their software that is being used to cast the correct votes? No way! Voting systems should be software independent.

Tragically, we have lost the ability to verify our election results!

Privatization of our elections is dangerous and has caused us to be in an extreme election crisis now and forever, unless we do something to secure the vote, quickly.

There is no real accountability or oversight now. Election rigging and/or stealing will continue on a national, state, and even local scale because a virtual vote count is easily manipulated without our knowledge of what is being done in secret. We need to know that barcodes are read by scanners and tallied but cannot be read by humans or verified. Voting devices that have tallying barcodes are dangerous, unreliable, and can be manipulated. Computerized voting must be stopped!

Unfortunately, most TV networks get their exit poll numbers from the same source, so how are we to judge the votes? We desperately need our paper ballots to vote so there will be a paper trail. At least with paper ballots we can demand a visible count, but the way it is now…we get nothing!

As voters and taxpayers, we do not give our consent to private corporations running our elections! These privatized secret ballot counts violate our civil rights! Stop the election fraud now. America gravely needs transparency.

The deep state players aren’t just in one political party.

America’s Electronic Voting System is Corrupted to the Core

The centralization of America’s election system.

Just two vendors — Election Systems & Software, LLC (ES&S) and Dominion Voting — account for eighty percent of US election equipment. Thus, corrupt insiders or foreign hackers could wreak havoc on elections throughout the United States by infiltrating either of these vendors.

In terms of solutions, experts say that the only way to know for sure if electronic vote totals have been altered is to compare a hand tally of the paper ballots to the electronic totals.

But over the past several years vendors, have changed the meaning of “paper ballot” to include not only unhackable hand marked paper ballots, but also hackable machine-marked summary cards with barcodes from expensive new electronic ballot marking devices (BMDs). The barcode, which voters can’t read, is the only part of the printout counted as your vote.

ATTENTION: Check out this Election Law Journal publication! It’s worth the read, especially for attorneys: Ballot-Marking Devices (BMDs) Cannot Assure The Will of the Voters (from this link: https://www.stat.berkeley.edu/~stark/Preprints/appelEtal20.pdf)

BMDs are also subject to hacking, bugs, and misconfiguration of the software that prints the marked ballots. Most voters do not review BMD-printed ballots, and those who do often fail to notice when the printed vote is not what they expressed on the touchscreen.

ES&S installed wireless modems in ballot scanners in Florida, Illinois, and Wisconsin, starting in about 2015. Although some election officials claimed that these modems do not connect to the internet, this too was a lie. This was a statement made with an intent to deceive.

In Order to Secure $40 Million NY Contract, ES&S Paid Anthony Mangone $50,000 to Act as Lobbyist–Despite Mangone Being Under Federal Investigation for Corruption and Previously Pleading Guilty to Election Rigging (2010).

At issue are touchscreen machines manufactured by ES&S, 97,000 of which are in use in 20 states,

The process for calibrating the touchscreens allows poll workers or someone else to manipulate specific regions of the screen, so that a touch in one region is registered in another. Someone attempting to rig an election could thus arrange for votes for one candidate to be mapped to the opponent.

Will our election officials hear our cry for human-readable paper ballots before the 2024 election? We anxiously await the outcome.

Here’s what is happening right now in Arkansas.

Please take the time to read about this needed lawsuit from ARKANSAS VOTER INTEGRITY INITIATIVE, INC.

They are bringing the lawsuit against the ARKANSAS SECRETARY OF STATE, ARKANSAS STATE BOARD OF ELECTION COMMISSIONERS and ELECTION SYSTEMS AND SOFTWARE, LLC regarding the Arkansas election. It is critical that we stay informed.

Here’s an article by The Freedom Times about it entitled ‘The Fight is Not Over’: Congressional Candidate Col. Conrad Reynolds Issues a Statement to ‘Unsatisfied’ Arkansans. 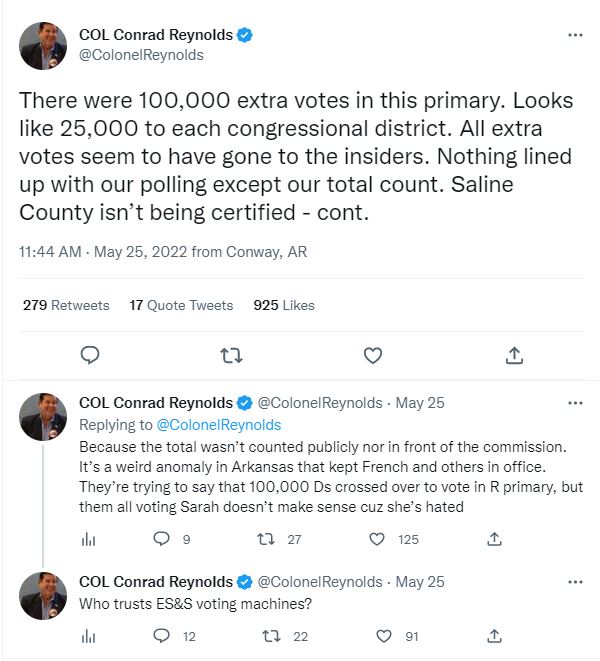 Here is the PDF of the Law Suit: Complaint for a Declatory Judgment, Motion for Injunction, and Motion to Expedite (Arkansas Voter Integrity Initiative, Inc. vs Secretary of State John Thurston and the Board of Commissioners and Elections Systems and Software). What’s the purpose of the lawsuit? From the PDF:

The solution is going back to strictly paper ballots so we can have voting integrity!

Here’s just one example of votes being flipped in Arkansas:

Bruce Haggard, an election commissioner in Faulkner County, Arkansas, is baffled by a problem that occurred with two voting machines in this month’s state primary elections. The machines allocated votes cast in one race to an entirely different race that wasn’t even on the electronic ballot. The problem resulted in the wrong candidate being declared victor in a state House nomination race.

The problem occurred with two touch-screen voting machines made by Election Systems & Software, which were the only machines used in Faulkner County’s East Cadron B voting precinct.

Arkansas has ES&S Voting machines, and unfortunately, some components do come from China. (There could always be a backdoor access through the components.) Even touchscreens, processors, and tablets are included.

In closing, Secure Arkansas wanted our final article for the year 2022 to be this one. Why? Because if we can’t have a free and verifiable election, then we have fallen into totalitarianism. It’s going to take each and everyone of us contacting our legislators and all of our election officials about the corrupt voting machines.

Is there hope? If so, will you help and make some calls or send some emails?

Arkansas State Board of Election Commissioners