Let’s Put a Stop to the Toxic Fluoridation of Arkansas’ Water Supplies!

The purpose of this article is to put the Arkansas legislature on notice and inform the people of Arkansas of the potential harm from the fluoridation of the public water supplies due to the passage of ACT 197 which puts fluoridation under state control.

“I am appalled at the prospect of using water as a vehicle for drugs. Fluoride is a corrosive poison that will produce serious effects on a long range basis. Any attempt to use water this way is deplorable…  No physician in his right mind would hand to his patient a bottle filled with a dangerous drug with instructions to take as much or as little of it as he wished…  And yet, the Public Health Service is engaged upon a widespread propaganda program to insist that communities do exactly that.  The purpose of administering fluoride is not to render the water supply pure and potable but to contaminate it with a dangerous, toxic drug for the purpose of administering mass medication to the consumer, without regard to age or physical condition.”

When referring to water fluoridation, it is important to note fluoride dosage, which is the actual amount that a person consumes on a daily basis.  It is not just the concentration of fluoride added to the drinking water at the water plant that counts.  The total intake from ALL sources is what is important to prevent overexposure.  To obtain the  daily recommended dosage, a person only has to drink 4 cups of water.  Bear in mind that fluoride accumulates in the body.  Healthy adult kidneys excrete 50 to 60% of the fluoride ingested each day (Marier & Rose 1971).  Any remaining fluoride accumulates in the body, typically in the bones and pineal gland (Luke 1997, 2001).  Babies and children excrete less fluoride from their kidneys and absorb up to 80% of ingested fluoride into their bones (Ekstrand 1994).  The concentration of fluoride in the bones increases over a lifetime (NRC 2006). 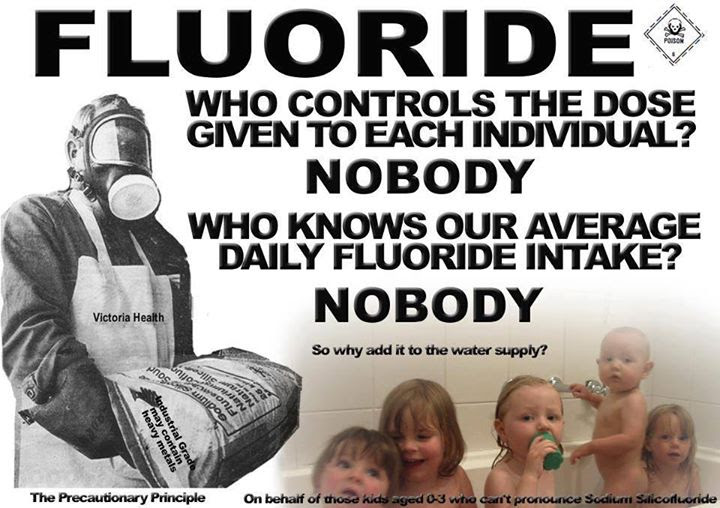 Click here to read a letter from the Department of Health and Human Services acknowledging that fluoride IS A DRUG.

The EPA has established the maximum (MCL) amount of naturally occurring fluoride that is allowed to be present in the water.  Water providers must remove fluoride if it is above the MCL of 4ppm. The EPA knows and has acknowledged that fluoride can be harmful when ingested at 4ppm and above.  If ingested for 20 years at this amount, a person can experience painful skeletal fluorosis.  Skeletal fluorosis is a fluoride-induced bone and joint disease that mimics the symptoms of arthritis (Singh 1963; Franke 1975; Teotia 1976; Carnow 1981; Czerwinski 1988; DHHS 1991).  According to an article published in Chemical & Engineering News, “Because some of the clinical symptoms mimic arthritis, the first two clinical phases of skeletal fluorosis could be easily misdiagnosed” (Hileman 1988). According to the CDC (2002), 1 in 3 Americans have some form of arthritis.  Very few studies have been done to determine whether the high prevalence of arthritis in America and other fluoridated countries could be related to growing fluoride exposure.

If you check the USDA database for the food and beverage that you consume in a day, you might be very surprised to learn that many people, including yourself, exceed the MCL of 4ppm every day.  The Department of Health and Human Services (DHHS, 1991) has estimated that total fluoride exposure in fluoridated communities ranges from 1.6 to 6.6 mg/day.

The table shown below is from the Centers for Disease Control (CDC) website at this link.

Currently, the Arkansas Department of Health sets the optimum concentration of fluoride at 0.7-1.2 milligrams per liter (0.7-1.2mg/L).  From the above table, it is easy to see that this exceeds the maximum limits of 0.6 (0.6mg/L) for children 0 to 16 years of age as established by the Center for Disease Control (CDC).  The table clearly shows that no child from 0 to 16 years of age should ingest any community drinking water that has a fluoride level above 0.6 mg/L.  For health reasons, NO ONE should ingest any fluoride, period!

The following EPA Drinking Water Contaminants chart below lists two of the many contaminants that are listed for water:  fluoride and lead.  The EPA Maximum Contaminant Levels (MCL) are the maximum levels that are considered safe for health.  From EPA’s own data, they state:  “There is no safe level of exposure for lead”.  The MCLG for lead is ZERO.  Lead is one of the many contaminants in fluoride that is used for the public water fluoridation.

Bottle-fed babies receive the highest doses of fluoride.  Since they have a liquid diet, formula-fed babies have the highest exposure to fluoride.  Infant exposure to fluoridated water has been repeatedly found to be a major risk factor for developing dental fluorosis later in life (Marshall 2004; Hong 2006; Levy 2010).  As a result, dental researchers have recommended that parents of newborns NOT use fluoridated water when reconstituting formula (Ekstrand 1996; Pendrys 1998; Fomon 2000; Brothwell 2003; Marshall 2004).

The information from the above link discusses assessment of fluoride intake from beverages and foods.  All the fluoride that you take into your body must be accounted for; remember that it isn’t just the water that needs to be taken into consideration.  Just about everything we eat and drink contains fluoride!  It is the total intake per day of fluoride from all sources that counts.

We consume fluoride from the following sources:

Toothpaste with fluoride, baby formula, foods cooked in fluoridated water, canned soup, or soup in restaurants, mechanically deboned chicken (i.e. chicken nuggets), food cooked in teflon cookware, soda pop and soft drinks, fruit juices, beer and wine (unless they are imported from Europe or other areas that don’t fluoridate the water), coffee (if made with fluoridated water), tea, most packaged and processed foods, and believe it or not, cigarettes and chewing tobacco.  The following are examples of the fluoride content of common beverages.

It is also interesting to note that federal agencies have started to backpedal regarding their recommended amount of fluoride humans should be ingesting.  In January of 2011, the Department of Health and Human Services (HHS) released a new recommended guideline of .7 mg/L.  The original U.S. Public Health Service guideline was 0.7 to 1.2 mg/L.  The Arkansas Department of Health did not change to the new lower recommended fluoride levels and has kept the old levels 0.7 to 1.2 mg/L knowing that children would be at a higher risk of developing dental fluorosis.

Until Act 197 is repealed, the Arkansas Department of Health should be required to modify their regulations to replace the old Optimal Fluoride Level from 0.7 -1.2 mg/L to the newly recommended value of 0.7 mg/L.

What are fluoride’s health effects?

“Exposure to excessive consumption of fluoride over a lifetime may lead to increased likelihood of bone fractures in adults, and may result in effects on bone leading to pain and tenderness. Children aged 8 years and younger exposed to excessive amounts of fluoride have an increased chance of developing pits in the tooth enamel, along with a range of cosmetic effects to teeth.” “This health effects language is not intended to catalog all possible health effects for fluoride. Rather, it is intended to inform consumers of some of the possible health effects associated with fluoride in drinking water.”

There are hundreds of studies showing water fluoridation is an enzyme inhibitor and that it causes arthritis symptoms, lowers IQ in children, affects thyroid function, can increase heart disease, harms kidney patients and diabetics, causes brittle bones which leads to more hip fractures in the elderly, and breaks the blood-brain barrier that prevents carrying aluminum to the brain causing Alzheimer’s disease.  Many of these studies are being ignored and called ‘junk science’ because they do not go along with the status quo that believes that water fluoridation is safe and effective for EVERYONE.

Arkansas’ Act 197 is the drugging of Arkansans with unregulated doses of fluoride without informed consent.  We believe this violates our bodies and is considered torture, and is cruel, inhuman, or degrading treatment or punishment.  This is all on the pretense of preventing tooth decay in poor children, which the CDC admits are disproportionately harmed by water fluoridation.

Speaking of harm, we would like to remind you that in the past, the U.S. Federal Government engaged in unethical and involuntary human experimentation for the development of technologies thought critical to U.S. national security.

During the 20th century, there were various secret chemical, biological, and nuclear experiments conducted by the United States government upon its own unsuspecting people.  There were details of numerous secret and sinister experiments that harmed, tortured, and killed Americans without their knowledge.  At the same time this was happening, they started the first water fluoridation experiments.  Fluoridation began at a time when we were told by the experts that cigarettes were good for us, that DDT would not harm us, and when lead was added to gas and paint, when asbestos was used in homes and businesses, and when cancer-causing flame retardants were added to our children’s pajamas (PJ’s).

Secure Arkansas believes that water fluoridation violates the spirit and principles of our Declaration of Independence, the Bill of Rights, and the United States Constitution!

We must demand safe drinking water supplies!  Keep calling all the legislators, please!  Don’t take “no” for an answer!  Please notify Secure Arkansas with the responses you receive from your legislator.

Be sure to forward this email to your family and friends!  Our health is important!
They may also sign up to receive our Action Alerts by clicking here.