The Con-Con and Our 2nd Amendment Rights

It’s critical that you read SECTION 2 of this article, as it addresses the dangers of a Constitutional Convention… and how that would affect our 2nd Amendment Rights!  You need to contact your legislators and tell them to OPPOSE any form of a Con-Con!

Con-Con is the current verbiage for a Constitutional Convention.

Republicans, for at least a decade, have been pursuing a very, very dangerous “Constitutional Convention”.  It is improbable that they are so dense that they do not understand the potential damage a Constitutional Convention can wreak.  Once in motion, there are no controlling mechanisms to limit what individuals or entities can participate in the Convention, modify, or expand perpetuating their own self interests.

Both Bell & Ballenger’s resolutions depend on approval of 38 and 34 states respectively.

Specifically, Rep. Bell requires the petitioning of Congress for a Constitutional Convention to CONSIDER a federal balanced budget amendment.  Bell’s bill is ID’ed as HB 1006.

Ballenger’s resolution calls for a Con-Con to also impose fiscal restraints on the federal government, limiting their power & jurisdiction and the closing part of his resolution states—“limiting the terms of federal office holders”.  An insult to every Arkansan.  Refer to his vote on Issue 3….doubling term limits for the General Assembly.

Isn’t that interesting since Ballenger & also Bell voted for the Republican sponsored Issue 3 that allowed the Senate and the House a 150% increase in their salaries as starters, also allowing Republicans to put together an independent commission of political cronies to rule on ethics & salaries.  The corrupt Republican state party masked their true intent by labeling Issue 3 as an ethics bill that in fact DOUBLED THEIR TERM LIMITS.  What a scurrilous bunch!

Elected Republicans are too cunning & deceptive to believe they have the ability by any means, most particularly a Con-Con that could or would slow down, much less stop, any aspect of the criminal, cowardly U.S. Federal Government.  Our U.S. Constitution states very explicitly what is demanded of government in every aspect.  Observe the corrupt conduct of the 3 branches of government.  Look no further than the past 14 years—unending wars, the Affordable Care Act (Ark. Republicans extended for 2 years, which means it is here to stay), illegal immigration, amnesty, $18 Trillion national debt, spying & frying, the neutering of the 4th & 10th Amendments, the National Defense Authorization Bill, & the deadly merry-go-round keeps spinning.  War criminal, former President G.W. Bush, stated the U.S. Constitution was nothing but a “G.D. piece of paper”.  Who do Republicans think they are kidding?

So, who are Arkansas Republicans shilling for and why?  Definitely the RNC, ALEC, the Koch Brothers, etc.  It’s hard to imagine that 2 representatives from Mena & Hindsville have a burning interest in a Constitutional Convention, and most particularly when both reside in illegal Mexican sanctuary cities under the  control of the leadership of the quad-cities of NW Arkansas.

Another attempt to destroy our American heritage, culture, sovereignty, and the monumental efforts gifted to us by our Founding Fathers.

As the Republican majority party in Arkansas, you have again proven yourselves to be nothing more than the betrayers of citizen’s trust and a laughing stock.

The question remains—what is the real purpose of the proposed “Constitutional Convention”?

The Con-Con is being introduced in various forms, and they are as follows:

Politicians have been calling for a Con-Con for over 50 YEARS now, and Secure Arkansas believes it dates further back than that… We also believe that a Constitutional Convention in this day and age would violate the spirit and principles of our Declaration of Independence, the Bill of Rights, and the United States Constitution!

The following is from the 2nd paragraph of the Declaration of Independence:
“That whenever any Form of Government becomes destructive of these ends, it is the Right of the People to alter or to abolish it, and to institute new Government, laying its foundation on such principles and organizing its powers in such form, as to them shall seem most likely to effect their Safety and Happiness. Prudence, indeed, will dictate that Governments long established should not be changed for light and transient causes; and accordingly all experience hath shewn, that mankind are more disposed to suffer, while evils are sufferable, than to right themselves by abolishing the forms to which they are accustomed.“

The following are excerpts from the proposed Constitution for the Newstates of America:

ARTICLE I
Rights and Responsibilities

SECTION 1. Freedom of expression, of communication, of movement, of assembly, or of petition shall not be abridged except in declared emergency.

SECTION 8. There shall be a responsibility to avoid violence and to keep the peace; for this reason the bearing of arms or the possession of lethal weapons shall be confined to the police, members of the armed forces, and those licensed under law.

SECTION 10. Those who cannot contribute to productivity shall be entitled to a share of the national product; but distribution shall be fair and the total may not exceed the amount for this purpose held in the National Sharing Fund.

The link directly below shows one of the reasons they feel they need to CHANGE OUR CONSTITUTION! It’s vital that you read this document!

We are in Stage III of the disarmament, and this ties directly in with the U.N. Small Arms Treaty.

By the time Stage II has been completed, the confidence produced through a verified disarmament program, the acceptance of rules of peaceful international behavior, and the development of strengthened international peace-keeping processes within the framework of the U.N. should have reached a point where the states of the world can move forward to Stage III. In Stage III progressive controlled disarmament and continuously developing principles and procedures of international law would proceed to a point where no state would have the military power to challenge the progressively strengthened U.N. Peace Force and all international disputes would be settled according to the agreed principles of international conduct.

The progressive steps to be taken during the final phase of the disarmament program would be directed toward the attainment of a world in which:

(a) States would retain only those forces, non-nuclear armaments, and establishments required for the purpose of maintaining internal order; they would also support and provide agreed manpower for a U.N Peace Force.

(b) The U.N. Peace Force, equipped with agreed types and quantities of armaments, would be fully functioning.

(c) The manufacture of armaments would be prohibited except for those of agreed types and quantities to be used by the U.N. Peace Force and those required to maintain internal order. All other armaments would be destroyed or converted to peaceful purposes.

(d) The peace-keeping capabilities of the United Nations would be sufficiently strong and the obligations of all states under such arrangements sufficiently far-reaching as to assure peace and the just settlement of differences in a disarmed world.

Do you actually TRUST the current politicians promoting this issue? You can bet that, with this move, we will not be allowed to own guns, and they will be confiscated, just like in other countries! Look at what happened in Australia: 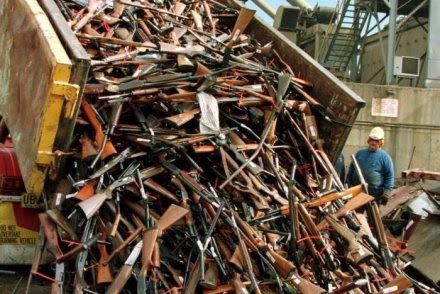 Please notify Secure Arkansas with the responses you receive from your legislator.

Be sure to forward this email to your family and friends!  Our health is important!
They may also sign up to receive our Action Alerts by clicking here.