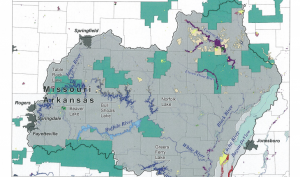 We are being asked by county judges how the White River National Blueway Designation would adversely affect property owners in the county.  Here is an example of our cover letter:

The Blueway is a very broad spectrum, all-encompassing program that will be very unkind to property owners and their unalienable rights that protect them.  It represents an end-run around Constitutional law. The Blueway will adversely affect both ranchers and farmers in the county, as well as the support base centered around those functions: businesses like the feed stores, the hardware stores, tack shops, farriers, real estate people, county fair functions, co-ops, farm equipment dealers and maintenance shops, large animal veterinarians, health care providers & hospitals, restaurants, fuel depots, schools, etc. etc.  If the farmers, ranchers and rural land owners cannot function freely, then the rural and small towns and hamlets in Arkansas and Missouri will ultimately dry up as an industry in this federally designated corridor called the Blueway.

The Blueway is presented as some warm and fuzzy program to protect the environment, when in fact it is an unlawful federal land grab with an end run game plan to drive you off of your land, so some obscure endangered species won’t be threatened by man’s progress.  Think of an Environmental Impact Study on steroids, and you have the Blueway. Progress won’t be just thwarted for several months or years; it will be halted altogether.  Several years back, the nation all watched in horror when the California Fish and Game Commission ruled in favor of the Long fin and Delta smelt (a two inch minnow) over the livelihoods of 60,000 workers and land owners in California’s San Joaquin Valley, considered by many to be the richest and most productive farmland in the nation. The environmentalists shut off the water pumps to farmers, prohibiting them from irrigating their fields.  Aside from the vast loss in food production to the world, the workers all went on unemployment overnight!  With an annual rainfall of 12 inches, the place looked like a dust bowl in a few short months.  Any farmer will tell us, once you uncover the land, and then don’t water it, nothing will grow there again.  Duh. The same mentality pushing the Blueways is the same mentality that shut that water off. Animal protection takes priority over humans.  Economic growth is the enemy to the Environmentalists and to their god, Mother Nature.  It is really a religion of sorts to these people.  The White River National Blueway will help to terminate economic activity in and around the 17.8 million acres shown on the map.  Running water and moving water becomes the yoke around the neck of those who live in this area.

Click here for a map of the affected area .  It encompasses over 17 MILLION acres!

Click here for the map of counties .   Counties highlighted in yellow already have volunteers to bring the Resolution of Opposition to their county judge or J.P. to stop the Blueway designation.   Is your county covered?  If not, PLEASE help us!  We need you to volunteer to help in the counties that aren’t highlighted in yellow.  You may click on a county and enter your contact information.

We have over 40 counties covered, and we need 50 by the end of the week.  We’ll need you to take the Resolution of Opposition to your County Judge or JP.    Click here for the Resolution .

We’ll send you all the other information that you’ll need after you sign up.