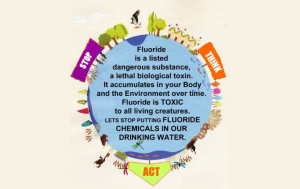 The Arkansas Department of Health is very deceitful and is lying about the fluoride facts posted on their website. You will be able to see after reviewing the four (4) Material Safety Data Sheets (MSDS) – regarding naturally occurring fluoride and the three chemical fluorides – that ALL the fluoride products are toxic and not safe as posted. Secure Arkansas has been attempting to set up a fluoride forum with the Arkansas Department of Health (ADH), but as of this date, ADH has not agreed.

Clarification on the two types of fluoride to which ADH health officials keep referring:

Manufacturers of sodium fluoride manipulated their data to create the illusion that sodium fluoride is not toxic. They then used this data to convince political leaders to allow them to add sodium fluoride into consumer products, pesticides and drinking water.  (You may have heard it said: “The solution to pollution is dilution.”  This is dangerous!)

The fluoride chemicals being used to fluoridate drinking water are: hydrofluorosilicic acid, sodium fluorosilicate, and sodium fluoride. Unlike the fluoride compounds found in toothpaste or supplements, water fluoridation chemicals are not pharmaceutical grade quality. They are, instead, unpurified industrial by-products that are collected in the air pollution control systems of certain industries.

Although the dental community that calls fluoride a “naturally occurring mineral” wants to frame the fluoride/fluoridation question completely around dental concerns, that effort is at the very least disingenuous. Chemists characterize fluoride as a poison. Fluoride is included in toxicology compendiums, and it has been labeled a neurotoxin. Fluoride is more toxic than lead and only slightly less toxic than arsenic. Harvested from smokestack slurry, most fluoride added to our water supplies originates as waste product in the aluminum and phosphate industries. A 2014 study of fluoride samples predictably reported that 100% of those samples were contaminated with aluminum, while lead, arsenic, cadmium, and barium were other common contaminants. The study author, toxicologist Dr. Phyllis Mullenix, wrote, “Aluminum and barium levels approach what EPA finds in electroplating sludge and hazardous soils….”

Even within the dental framework, there is no actual science proving any systemic ingestion mechanism of fluoride that results in dental benefits. Those claims are based on medical hypothesis and dental studies open to charges of bias and selective sampling, i.e. proxy use of Medicaid codes for cavities in a region with known high incidences of Medicaid fraud as input in a simulation to demonstrate that water fluoridation is beneficial to poor children. The simulation output is contrary to Medicaid data from other regions. It is also in stark contrast to real world data from large fluoridation studies in the U.S. and New Zealand that examined tens of thousands of actual children which demonstrated there is no significant difference between cavity rates in fluoridated and non-fluoridated communities.

Fluoride has two sources. It can appear ‘naturally’ in water or it can appear as a chemical toxic waste. Even where it does appear naturally in water, it can cause problems.  You have to ask yourself why those industries which produce toxic fluoride wastes are in favor of water fluoridation. To answer this question, you need to follow the money.

The three types of Chemical Fluorides used in water fluoridation of water supplies are:

Environmental regulations were put in place where pollution control devices were set up in order to capture the contaminants, like arsenic, lead, mercury, silicofluoride, and more. Included in the pollution control device is hydrofluorosilicic acid, so toxic that one needs to wear a full body suit and mask to be around it. Hydrofluorosilicic acid occurs from strip-mined rock by the Phosphate Mining & Production Industry. The rock is broken up, placed in giant vats where sulfuric acid is also added to get rid of whatever phosphate (and other contaminants) are in the rock. While the phosphate is extracted, the contaminants used to be released into the atmosphere. This was creating more pollution, and killing animal and plant life. These contaminants are then taken out of the chimneys (scrubbed off with the acid) and stored in “open-air cooling lakes,” which are further exposed to airborne contaminants. (See video)

“In regard to the use of fluorosilicic acid as a source of fluoride for fluoridation, this agency regards such use as an ideal environmental solution to a long-standing problem. By recovering byproduct fluorosilicic acid from fertilizer manufacturing, water and air pollution are minimized” Rebecca Hanmer – Former Deputy Assistant Administrator For Water, US Environmental Protection Agency

Industrial practices produce millions and millions of gallons of this liquid hazardous waste. Because it costs these corporations thousands and thousands of dollars per ton to neutralize and dispose of (hydrofluorosilicic acid), they instead sell it to the population as a ‘product.’ How ridiculous is that? Hydrofluorosilicic acid is shipped to your local drinking water supplier.

The diamond is broken into four sections. Numbers in the three colored sections range from 0 (least severe hazard) to 4 (most severe hazard). The fourth (white) section is left blank and is used only to denote special fire fighting measures/hazards.

MSDS Personal Protection Codes This is the bottom white box shown above. The Hazardous Materials Identification System (HMIS) can be label with letter A through Z.

There is a petition from American University to EPA to prohibit the use of Hydrofluorosilicic Acid (HFSA). This action would simultaneously prevent hundreds of cases of lung and bladder cancer through the reduction in the amount of arsenic now being delivered to our citizens who drink water that is fluoridated with hydrofluorosilicic acid (HFSA).

Paul Connett on the Health Risks of Fluoridation

This video features Dr. Paul Connett, director of the Fluoride Action Network (FAN), as he discusses the health risks of water fluoridation of which you may have not been aware.