Follow The Money: Who Profits From Fluoridation? And Who Pays? 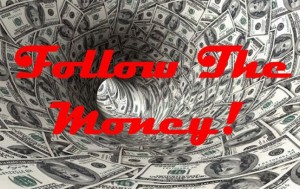 – The Economics of Water Fluoridation: A Snapshot –

1a. From Table 7.1 (EPA 2010 RSC Fluoride Document) the average fluoride intake for children between 0.5 and > 14 years, excluding toothpaste and soil ingestions, is about 1.75 mg/day.

3a. Therefore the excess fluoride coming from fluoridated water is about 1.6 mg/day

6a. About 90% of the fluoridation chemicals, HFSA and its sodium salt, collectively “silicofluorides (SiF’s),”come directly from phosphate fertilizer producers. An unknown about of sodium fluoride may also come from this source.

7a. Thus, about 90% of the income loses from above are directly attributable to the phosphate fertilizer industry.

Owners of the phosphate producing companies that supply SiF’s to water authorities reap a mere $274,000,000 every year, with an unknown amount of that no doubt going to support and maintain the practice of water fluoridation, the only lawful means of disposing of those waste by-products. That pure profit is paid for by these children, their families and communities, and the nation as a whole with losses every year between $240,000,000,000 and $440,000,000,000. Other additional losses attributable to generalized lower intelligence across the whole population, including fewer geniuses and more with substandard intelligences are beyond calculation.

The U.S. Environmental Protection Agency, which proudly boasts that it works for environmental justice, encourages this situation. (Hanmer 1983). WTF.

Hanmer 1983. Letter from R. Hanmer, Deputy Assisstant Administrator for Water, USEPA to L.A. Russell. Response to inquiry re: use of HFSA in water fluoridation. March 30, 1983.