Fluoride: A Toxic Poison and the IQ Studies 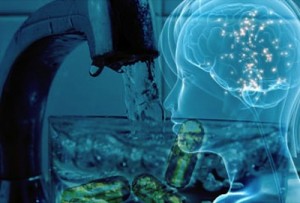 At the Arkansas Department of Health quarterly board meeting on July 23, 2015, Sandra Young, M.D. spoke about fluoride lowering I.Q. as well as causing other chronic health problems.  This article is written from a doctor’s standpoint and will address those topics in more detail; it should especially capture the attention of our medical and scientific audience.

Michael Connett, son of Paul Connett, PhD-author of “The Case Against Fluoride”, has recently given an excellent talk reviewing results of 48 studies on the effects of fluoride on the brain. (We highly recommend watching it!) Michael’s presentation was given at the 2014 Fluoride Action Network Conference and addresses the mounting evidence that fluoride reduces IQ in children. The IQ studies are just the “tip of the iceberg” when other animal and human studies are considered. Research continues to support the idea that fluoride is a neurotoxin.

“Fluoride compounds which are put in water (fluoridation), toothpaste, and supplement tablets (including some vitamins) were never tested for safety before approval. [If you can find evidence to the contrary, email it to Secure Arkansas! [email protected]] Recent independent research by scientists not associated with dental trade organizations has shown the following”:

[bracketed and highlighted information above, ours]

In addition to the fluoride warnings published in the journal, a recent meta-analysis from Harvard found a correlation between fluoridated water and low IQ scores in children who grew up in the most fluoridated areas. For additional scientific information with comments from Dr. Philippe Grandjean, a physician and epidemiologist at Harvard University, CLICK HERE.

Another study says that fluoride impairs learning and memory, and this separate study links fluorosis with brain cell apoptosis (cell death).  Other rat studies have linked brain damage with aluminum and fluoride in water.

Fluoride can also affect fetal brain development.  This was well known previously but has apparently been forgotten.  In the 1960s, the FDA banned the use of prenatal fluoride supplements based on its concern about possible untoward effects on the fetus.  Yu Y, et al. (1996). Click here to read about neurotransmitter and receptor changes in the brains of fetuses from areas of endemic fluorosis. Chinese Journal of Endemiology 15:257-259; re-published in Fluoride 2008, 41(2):134–138  Areas of endemic fluorosis have higher levels than should be in our water supply, barring some malfunction of equipment.  It is known that fluoride can cross the placenta from the mother’s blood to the developing fetus.  “The passage of fluorine through the placenta of mothers with chronic fluorosis and its accumulation within the brain of the fetus impacts the developing central nervous system and stunts neuron development.”  Du L. (1992). This article explains the effect of fluorine on the developing human brain. Chinese Journal of Pathology 21(4):218-20; republished in Fluoride 2008, 41(4):327–330.

Another Chinese study showed that fluoride retarded the growth and division of cells in the cerebral cortex.  Han H, et al. (1989): Effects of fluorine on the human fetus. Chinese Journal of Control of Endemic Diseases 4(3):136-138, 1989; republished in Fluoride 2008, 41(4):321–326.  A separate study showed that maternal exposure to fluoride resulted in damage to cell structures that was multifaceted. Cell membranes, mitochondria, rough endoplasmic reticulum, and nuclear membranes could all be damaged at the time of fluorosis.  Yu Y. (2000): Effects of fluoride on the ultrastructure of glandular epithelial cells of human fetuses.  Chinese Journal of Endemiology 19(2):81-83

In 2006, the National Research Council printed “Fluoride in Drinking Water: A Scientific Review of EPA’s Standards“.  A summary of the Neurotoxicity and Neurobehavioral Effects can be found at this link.

The NRC’s recommendations were:

Neurodevelopmental disabilities, including autism, attention-deficit hyperactivity disorder, dyslexia, and other cognitive impairments, affect millions of children worldwide, and some diagnoses seem to be increasing in frequency. Industrial chemicals that injure the developing brain are among the known causes for this rise in prevalence. In 2006, we did a systematic review and identified five industrial chemicals as developmental neurotoxicants: lead, methylmercury, polychlorinated biphenyls, arsenic, and toluene. Since 2006, epidemiological studies have documented six additional developmental neurotoxicants — manganese, fluoride, chlorpyrifos, dichlorodiphenyltrichloroethane, tetrachloroethylene, and the polybrominated diphenyl ethers.

Also, click here to read a paper by Varner et al in Brain Research (1998). We think you will relish reading it if you haven’t already. One of their many findings in a low-dose, long-term rat study was beta-amyloid deposits in rats exposed to either NaF or AlF3 (sodium fluoride or aluminum fluoride).  These are seen in Alzheimer’s Disease.

Given the numerous studies listed above and the cognitive impairments linked to fluoride, please consider saving this information and even printing it off for yourself… and to give to your dentist and medical doctor.

As always, you can find our articles posted on our website: SecureArkansas.com .  The Search box is a handy tool.