Part 1 – Sinister Backroom ALEC Deals: Where Laws Are Really Made 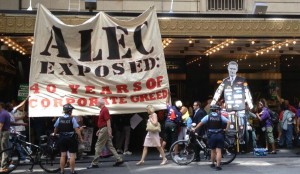 The Back Room is where corporations have an equal vote with the legislators on bills that are to be introduced.

The Investigators:  ALEC – The Backroom Where Laws are Born – a 6:31 minute YouTube video aired by an Atlanta TV station.  This is a glimpse into the world of the American Legislative Exchange Council, a corporate-funded charity that pays for lawmaker trips to resorts where they leave with ready-to-pass bills. Neither ALEC nor the legislature would show from where the money comes or to whom it goes.

United States of ALEC : A Follow-up  – a 56:43 minute YouTube video. ALEC is changing the country by changing the laws one state at a time.

Moyers & Company follows up on a breakthrough 2012 report about ALEC, the American Legislative Exchange Council. A national consortium of state politicians and powerful corporations, ALEC presents itself as a “nonpartisan public-private partnership,” but behind that mantra lies a network of lobbying and political action aimed to increase corporate profits at public expense without public knowledge.

ALEC supports the toxic fluoridation of the public water supplies!  Chemicals are big business for the Koch brothers – who are the main creators of the Tea Parties, Americans For Prosperity, and FreedomWorks.

Click here to see all the other supporters of fluoridation besides ALEC.  American Dental Association (ADA) is now a member of ALEC. They are playing a heavy hand in Arkansas policies. Check here to see the article “The Corporations, and Dentists, That Still Love ALEC”.

American Legislative Exchange Council (ALEC) is an organization that gets money from lobbyists and gives it to legislators, and it all is considered charity.

ALEC is truly a corporate bill mill. They are cranking out legislation and putting it into the hands of legislators so they will go back home and file it. ALEC bills come with blanks where the legislators can fill in their state name and then file the bill. These bills are voted on at the state capitol, but they are first approved at a closed-door ALEC meeting by ALEC corporate members and ALEC legislative members. The ALEC legislative members that sponsor and/or vote for the ALEC legislation receive campaign donations from ALEC and/or ALEC corporate members. This is money that can be filtered through ALEC where they can get a tax write off.  For a list of some of ALEC’s model legislation, click here.

The following is the description of what ALEC filed with the IRS on Form 990 concerning their Tax Exempt Status:

The American Legislative Exchange Council is a think-tank for state-based public policy issues and potential solutions. The Organization’s mission is to assist State Legislators, Members of Congress, and the general and business public by sharing research and Task Forces — ALEC’s policy Task Forces provide a forum for legislators and the private sector to discuss issues, develop policies, and draft model bills and resolutions which serves as a public policy resource. The Task Forces include the following: Civil Justice; Commerce, Insurance and Economic Development; Education; Energy, Environment and Agriculture; Health and Human Services; International Relations; Tax and Fiscal Policy; Communications and Technology; and Public Safety and Elections.  Conferences — ALEC holds national conferences, providing workshops on current issues with leading experts, public figures and elected officials. The three national conferences held during 2011 were the Spring Task Force Summit, Annual Meeting and States and National Policy Summit.  Membership — Membership manages the programs for the recruitment and retention of ALEC State Legislator members. This includes liaison with the ALEC State Chairs and Private Sector State Chairs. In addition, Membership provides assistance to ALEC State Chairs in ensuring that members of ALEC’s leadership are operating in accordance with ALEC’s policies and procedures.

Currently, the lawmakers which ALEC has recruited for State Chairs in Arkansas are Representative Nate Bell (Mena) and Senator Eddie Joe Williams (Cabot).  These state chairs sign a contract with ALEC.  To see the contract that the ALEC state chairs sign, click here and go to page 19, 20, and 21. This document is part of a large pdf document that covers the ALEC 40th Board Meeting which was held August 6, 2013 in Chicago, Illinois.

The following is from pages 19 through 21 of the contract signed by the ALEC state chair:

So, if you are expecting transparency, think again.  ALEC prefers to operate in secrecy!

This information about Senator Williams was released back in 2012:
An example of more ALEC corruption in the Arkansas General Assembly involves Senator Eddie Joe Williams.  In an FOIA that was requested by Secure Arkansas on December 4, 2012, on Senator Eddie Joe Williams, we found that he was charged with violating Ark. Code Ann. § 7-6-203(g) in his capacity as the incumbent candidate for State Senate – District 28 during the 2012 election cycle.

Are you frustrated with our government? How many many times have you heard people say, “My representative just won’t listen to me!  No matter how many calls or emails I make, no matter how much truth and good sound information I give them, they just seem to ignore me and their constituents.  It’s like running up against a brick wall!” If you didn’t know it, all ALEC chairs sign a loyalty oath with ALEC.

ALEC has another group called American City County Exchange (ACCE).  Make sure you pay attention to their policy statements!  Everything is being controlled behinds the scenes by UNelected officials! This group is in direct competition with the State Municipal Leagues (National League of Cities) and the National Association of Counties (NACo), all of which are non-government.  Our conclusion: NGO’s are unelected and dangerous!  They are making policy both globally and locally with their rules and regulations under which you will live.

Here is some background information about ALEC:

Cecile Bledsoe is an ALEC Health and Human Services Task Force Chair and member; Dr. Jim Bledsoe (her husband) was awarded a new position as EMS; and Dr. Greg Bledsoe (their son) Arkansas Surgeon General was rewarded handsomely for her service to ALEC.  Obviously, this group is very powerful, and if you are faithful to the beastly system, it can get you places!

Secure Arkansas has asked in a past article: Will Ark. Surgeon General Bledsoe Keep Our Children From Harm?  We are still waiting for an answer…

We want our Arkansas Surgeon General, Dr. Greg Bledsoe, to be contacting qualified medical specialists instead of dentists when it involves fluoride damage to the brain, thyroid, kidneys, etc.  It is Dr. Bledsoe’s responsibility to look at the new studies, NOT the opinions and endorsements from the oral health coalition!  Dentists have no expertise in those fields!

The SENATE  PUBLIC HEALTH, WELFARE AND LABOR COMMITTEE, 2011 was the committee that pushed and passed SB359 Fluoride mandate legislation. This was an Act to mandate fluoridation in all systems that serve 5,000 or more.

For the 2011 Arkansas Senate Vote on the Fluoride Mandate SB359, click here

For the 2011 Arkansas House Vote on the Fluoride Mandate SB359, click here

SENATE PUBLIC HEALTH, WELFARE AND LABOR COMMITTEE, 2011  This is the senate committee that voted to pass the fluoride mandate on to the floor!

A president pro tempore is a constitutionally recognized officer of a legislative body who presides over the chamber in the absence of the normal presiding officer. The phrase “pro tempore” is Latin “for the time being”.

SENATE  PUBLIC HEALTH, WELFARE AND LABOR COMMITTEE, 2015  This is the committee that killed HB 1355. This bill would have allowed the level of fluoridation to be controlled locally.

As of July 23rd, 2015  Arkansas Department of Health meeting report by Jeff Stone, there were 37 water systems in Arkansas.  24 of them are now fluoridated.  More of them will be forced to fluoridate if something isn’t done to stop it.  Carroll Boone Water District was fluoridated July 15th of this year, and last month Watson Chapel has now fallen prey to the poisoned water.

The U.S. Department of Health and Human Services has decreased its recommended level of fluoride in drinking water for the first time in a half-century. The new fluoride level in drinking water should be 0.7 milligrams of fluoride per liter of water.  The new level falls at the bottom end of the previously recommended fluoridation range of 0.7 to 1.2 milligrams per liter, which was issued in 1962.  The Arkansas Department of Health still has not lowered their fluoride level to match the U.S. Government fluoridation level of 0.7 per mg/l.

ALEC does have a stranglehold over our state and many of our legislators!  Arkansas Dental Association, DBH Management, and Delta Dental have contributed to many senatorial campaigns that hold a seat on this health committee.   Most Senate officers shown here are ALEC leadership.

ALEC’s rules give corporations a great deal of influence on the task forces they serve. Lawmakers can be removed very easily from the task force for any reason, but ALEC grants corporate members greater power so they can veto what is drafted by the task force.  Most bills devised from ALEC come home via our state legislators that have been drafted by lawyers from corporations or private sector members!  Your lawmaker usually just has a SUMMARY OF THE BILL and never fully reads the entire bill!  Most legislators don’t really have a clue about all of the devilish details listed in the lengthy bills they are carrying!

If you don’t already know, you must understand that BEFORE the legislative session begins each year in each and every state, the deals have already been made regarding the pieces of legislation that lawmakers will carry.  That’s why lawmakers hesitate to carry a bill from you:  they know that they will be loaded to capacity with other legislation before the filing time frame expires in a session.

Secure Arkansas is trying to convey to the general public what happens each year when corporations collude with legislators to draft bills and to bring about “best practices” (interests) of corporations in each state. When an ALEC task force convenes, it authors and approves a bill which then goes on to ALEC’s board of directors for their approval.  So, a task force seems to serve as public policy lab that gets disseminated to lawmakers across the nation!  A task force can also commission and publish research and even hold workshops — so they serve as a clearinghouse.

There are a couple of things you need to consider when it comes to ALEC politicians:

Part Two in our next article will cover the money trails used by the “powers that be” in trying to hide the donors and the recipients of the money. This is the way money is washed to hide the source and who is behind the scenes pulling the strings…