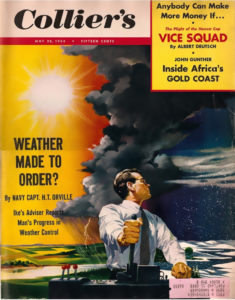 Hurricane Harvey is absolutely devastating the east coast of Texas including Houston, Galveston, Corpus Christi, and other cities in that area. MILLIONS of people are being affected! Could Hurricane Harvey have been manipulated and weaponized, resulting in the largest disaster and flood ever to hit Texas?  Secure Arkansas believes it’s being geoengineered, dear readers!  Our weather can be directed and amplified! And air flows are being guided! Let’s get to the bottom of what’s happening, shall we?

We know that the weather has been predicted and forecasted for some time…. but it IS possible to MODIFY, weaken, intensity, and direct weather in addition to merely forecasting it. Here is a research paper presented to the Air Force in August 1996 titled “Weather as a Force Multiplier: Owning the Weather in 2025”. Here is snippet from page 9:

NOAA’s plans include extensive data gathering programs such as Next Generation Radar (NEXRAD) and Doppler weather surveillance systems deployed throughout the US. Data from these sensing systems feed into over 100 forecast centers for processing by the Advanced Weather Interactive Processing System (AWIPS), which will provide data communication, processing, and display capabilities for extensive forecasting. In addition, NOAA has leased a Cray C90 supercomputer capable of performing over 1.5×10 operations per second that has already been used to run a Hurricane Prediction System.

And from page VI more towards the beginning of the paper:

In 2025, US aerospace forces can “own the weather” by capitalizing on emerging technologies and focusing development of those technologies to warfighting applications. Such a capability offers the warfighter tools to shape the battlespace in ways never before possible. It provides opportunities to impact operations across the full spectrum of conflict and is pertinent to all possible futures. The purpose of this paper is to outline a strategy for the use of a future weather-modification system to achieve military objectives rather than to provide a detailed technical road map.

So, they’re planning to use weather modification for military purposes…  Is this weather warfare?

If you are still having your doubts about weather modification, whether it is real or NOT, then you must read the following article entitled: “Weather Modification Operations with NEXRAD Level-II Data and Products”. In that article under item 3 Decision Support System, there is a part that will clarify that weather modification is a real occurrence:

Click here for public pdf copy from the National Oceanic and Atmospheric Administration’s (NOAA) map (shown above) of the NEXRAD Towers covering the U.S.NEXRAD stands for Next-Generation Radar and the system “currently comprises 160 sites throughout the United States and select overseas locations.”

Is there really weather modification going on now? Yes, and we do believe it has been going on for many years… so, unfortunately they can actually alter the weather! And yes, they have a type of weather management using a space-based power system. See this patent filed March 12, 2010: Patent: US 201002246996

When you closely examine the document on the patent itself (linked above), you can see exactly how they are manipulating our weather! This information can be found on page 12. Yes, they can alter or increase our weather.

Shown below is information about a NEWER patent (filed May 26, 2011) for modifying weather — referenced in the patent linked above:

The Title says “Method and System for Reducing Distructive [sic] Forces of a Hurricane”… but if they’re reducing, they could also be increasing the forces of weather.(Note:  they misspelled “destructive”. That wasn’t Secure Arkansas’ mistake.)

Is this like the “Silver Lining Project” that Bill Gates has talked about in the past?

The outline in the video presented by Hailong Wang revealed a lot of intriguing information including:

Stratospheric aerosols were mentioned in that list… Could these be the chemtrails? Oh, the chemtrails!!! LOOK UP, everybody! Do see the lines and Xs in the sky? Those are NOT the dissipating contrails but instead are nasty chemtrails.

Who’s one of the villains funding part of this?  Of course, the infamous Bill Gates!

Notice the picture below of the water vapour generating machines from the May 2010 article:

You’ve heard the saying: “A picture is worth a thousand words.”

Notice this from the abstract:

A nuclear fusion reactor (2) or nuclear fission reactor (22) is used as a heat source. A heat exchanger (11 or 37) that contains water to be heated (15) is used for water vapor generation. A circulating pipe (10 or 26) through which a fluid for cooling the nuclear fusion reactor or nuclear fission reactor or for conducting heat exchange circulates is disposed so as to extend in the heat exchanger and be in contact with the water to be heated. Water vapor is thus generated. This water vapor is jetted toward the sky at a state of collimation through a vapor discharge pipe (12 or 36). A cloud for blocking sunlight is formed in the sky from the water vapor jetted to reduce the temperature of the earth surface. This enables a weather modification without discharging any greenhouse gas, e.g., CO2.

Here’s a document from the National Center for Biotechnology Information (NCBI) on cloud brightening from 2012. Here’s an excerpt:

The idea behind the marine cloud-brightening (MCB) geoengineering technique is that seeding marine stratocumulus clouds with copious quantities of roughly monodisperse sub-micrometre seawater particles might significantly enhance the cloud droplet number concentration, and thereby the cloud albedo and possibly longevity.

Shown below is a picture of the result of strange weather in France. Notice how the water has pulled back from the beach! Is this an anticyclone?

Here’s a web article entitled: “NASA Satellite Pictures Prove Our Weather Is Manipulated” and here is a picture, but be sure to click the link to see the other images.

Could there be corporations involved in this scheme? Sure, there are, and they seem to get grant money from the taxpayers!

Here are some of the corporations about whom we know that are involved in weather modification:

See this NASA document! “The Evolving Landscape of the 21st Century American Spaceflight”:

Page 17 of this document pridefully boasts the names of some of the global elite and corporations like Amazon, Microsoft, and Space X.

See this patent filed on June 7, 1995 on the Satellite Weather Modification System (SWMS): “Use of artificial satellites in earth orbits adaptively to modify the effect that solar radiation would otherwise have on earth’s weather”

Quoting the patent document above:

This invention is based on the realization that natural weather patterns always leave opportunities to permit regional weather modifications which are within the capabilities of the proposed Satellite Weather Modification System (SWMS). A fully developed SWMS has the potential to provide the following benefits.

Speaking of space and weather, the Solaren Corporation announced the next phase of their Space Solar Development Program on June 8, 2016. (Space Solar Program, SSP).

He has the first commercially viable space solar power company!

His bio (found here) says he was with Boeing Satellite Systems and was the spacecraft engineer at Cape Canaveral AFS. It is touted on the company’s website that, “he successfully led a large spacecraft launch processing team of government and contractor personnel for a multi-billion dollar DOD satellite that flew on the space shuttle. In addition, Mr. Spirnak supported DOD and NASA Space Shuttle Launches, as well as USAF Delta and Titan launch operations in both technical and management roles.”

Also,the co-founder of Soleran and its Vice President and Chief Engineer, Dr. James Rogers,  works with NASA and DOD!

Notice the timeline: Then, on August 12, 2016, Russia announced the issuance of a Space Power System patent to Solaren Corporation. With this patent, “Solaren now has key enabling Space Solar Power systems patents in all of the world’s major space-faring countries.”

Partnering with the government for profit, perhaps?

Are the “powers that be” attempting to force people off the coastlines?  We think there will be many more experiments in the sky and on the earth to come… (Our air, food, water, and health are also being affected.)

Shown directly below is what we think is a complete list of U.S. Patents on weather modification. Please note, this all started in 1891. This is no mistake! We do mean 1891, and there are multiple pages of patents, so keep scrolling and clicking to read about them:

You may want to copy and paste the patent list above.  The hotlinks should transfer…

Abstract of the patent:

A plurality of orbiting solar generators stay in constant touch. They can be congregated rapidly in space at any desired secret location. Once congregated they all discharge their energy to a death star. This death star could be a newly launched ICBM. A laser generator uses this newly acquired energy on the death star to project a non-nuclear laser ray to a target. The target could be a city, a ship or a satellite. In the event of an asteroid approaching earth, this system could destroy an asteroid. In peacetime the orbiting solar generators could supply electric power to an earth based power grid.

Because the weather can be – and is being – manipulated, we believe the “powers that be” had the ability to use it for GOOD and to help the people in the Houston/ Galveston/ Corpus Christi area rather than to allow a devastating hurricane to bring such destruction on them… This cabal needs to be exposed. News reports have stated that it will take years for the hurricane-damaged areas to recover.

In summary, if you’re still in doubt regarding the validity and occurrence of weather modification, be sure to go back through the article and click on all of the patents again. We should all be outraged about weather modification! But don’t just get angry… get busy doing something about it!  Call your U.S. Congressmen and Senators, as well as every state legislator in the country, and share this information and this article with them. We can’t just sit back and be “We the Sheeple” and not do anything. Also share this article with everyone you know via email, social media, and the good ol’ fashioned way — word of mouth!  Prayer is very powerful, and so is ACTION.