Our nation has NEVER HAD a Constitutional Convention (Con Con) under our U.S. Constitution, and we don’t need one!

Unfortunately, the Con Con bills are back again… but under a different name this time.

The Senate State Agencies and Governmental Affairs Committee will hear two new Con-Con Resolution bills on Tuesday, February 7, 2017 at 10:00 am in the Old Supreme Court room at the Arkansas State Capitol.

American Legislative Exchange Council (ALEC) State Chair, Senator Eddie Joe Williams, is Chair of the Senate State Agencies and Government Affairs Committee and is allowing more diabolical Con Con bills to come through this loaded Senate committee in hopes of getting those bills passed after the ALEC legislators failed to so in this current 2017 session!

This is just another attempt for the Arkansas Legislators to Call for an Article V Amendment Convention (a.k.a Con-Con) by introducing SJR 7 and SJR 9.

Legislators: Remember, a NO VOTE is required on ANY piece of legislation calling for an Article V Amendments Convention. (See Article I, §8, clause 17 of the U.S. Constitution.) Ask any sponsor or promoter to please provide the supporting documents to defend their current position for an Article V Amendments Convention. So far, not one of the pro Con Con legislators has done this.

So, from where or by whom is the big push for the destruction of our Constitution coming?  One person promoting a complete rewrite of our U.S. Constitution is none other than billionaire progressive psychopath George Soros.

George Soros is bankrolling and promoting a movement called the Constitution_2020 Movement. He wants to see the U.S. Constitution rewritten by the year 2020! Soros’ Open Society Institute and the Center for American Progress sponsored the Constitution 2020 conference in April 2005.  He believes in a “new and improved Bill of Rights.[2]” Also, there is a book currently being sold on Amazon titled, The Constitution In 2020. Secure Arkansas has done some checking on some of the contributors of this book and they are radicals who promote a very radical agenda!  You must understand that both the Left and the Right are working together to destroy both our U.S. and state Constitutions.

So, who has introduced THESE two Constitution-destroying resolutions? 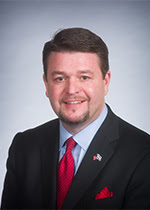 Senator Jason Rapert, another American Legislative Exchange Council (ALEC) member, is sponsoring these Con-Con bills, both which are applying for an Article V Amendment Convention.

SJR 7 and SJR 9 will be presented by Senator Jason Rapert (R) from Conway, Arkansas. This is such a disappointment. We cannot believe that Senator Rapert is actually presenting these Con Con resolutions once again! But he is… He has made several attempts over the past years to get this done and has failed each session. Now he is running these dangerous Con Con resolutions under the guise of Right to Life and Marriage. Don’t be fooled with this type of con… It’s still a Con Con/ Article V Amendment Convention!

Attention Legislators: Don’t be bullied or manipulated into voting for these deceptive Con Con bills!

We the people of Arkansas demand true representation from our elected officials.

Attention Arkansans: Remember, NOW is the time to contact these legislators! You simply cannot wait any longer because Secure Arkansas believes they could ALREADY have the votes secured to get this resolution out of committee, so it must be stopped… Right here, right now! Only with your help can we be successful. The emails and phone numbers of the committee members are below.

So, what can YOU do? Simple!

ACTION:  Copy and paste the greeting and these bulleted points (shown directly below) into the body of your email to send to the Senate Committee on State Agencies and Governmental Affairs. (Their email addresses are hyperlinked and all together in a group below.) Just be sure to type your name and the county in which you live at the end of your email to them. You can send ONE email to all of them.

Dear Distinguished Member of the Senate Committee on State Agencies and Governmental Affairs:

The following are the emails addresses of the committee members:

ALSO , it’s very important that you, the reader of this alert:

Remember, ALEC is a corporate bill mill, and most legislation isn’t even written locally, and neither was this resolution SJR 7 and SJR 9! So, ALEC — once again — has a stranglehold on this Senate committee! Remember that ALEC politicians cut backroom deals with ALEC. Through ALEC, Global Corporations (like Big Pharma or Big Tobacco) are scheming to rewrite YOUR rights and boost their revenues. This time, they are scheming with the legislators to have a Constitutional Convention that could end our freedom forever. In ALEC’s own words, corporations have a Voice and a Vote.

Now, you may remember SJR 2 — the first Con Con resolution introduced this 2017 session.

HERE IS HOW the Arkansas Senate State Agencies and Governmental Affairs Committee Members voted on SJR 2 on Jan. 26, 2017:

Senators’ names in RED BOLD font are members of ALEC.

Some are members of several! (See details here from one of our previous articles.)

No wonder so many ALEC bills and resolutions are passed by the Senate State Agencies committee!  It’s a stacked deck!

Remember, SJR 2 Con Con resolution passed of the Senate State Agencies committee on 1/26/2017, BUT IT FAILED ON THE SENATE FLOOR on 1/30/2017 thanks to all of your calls and emails, and especially thanks to those senators who voted against it!

NOTE: This is the SAME COMMITTEE that will be voting on these two NEW disguised Con Con resolutions!  These Article V Amendment resolutions are just another way to apply unnecessarily to Congress for a Con Con!

Take action to make sure that your legislator is representing YOU and not representing some other entity or non-government organization! (shadow government)

Secure Arkansas has been concerned with the application to call for an Article V Amendments Convention/ Con Con (and who may be involved in calling for one) for YEARS!!

Click here for a recent article from Secure Arkansas on why you should VOTE NO on ANY Article V Amendment Convention a.k.a.  Con-Con.

Let us know what you hear back from the senators about this.