Beware of the Hidden Agenda in an Article V Amendments Convention/ Constitutional Convention!

Don’t Be a Part of an Article V Deception that will Destroy the U.S. Constitution

The States have no power over an Article V Convention. All they can do is “apply to Congress to ‘call’ a convention” or ratify proposed amendments — if Congress proposes them and sends them to the States for ratification or rejection. This_chart shows who has the power to do what respecting an Article V Convention. (See below: the full chart is shown at the end of the email.)

Once again, Senator Gary Stubblefield still has NOT made his case for an Article V Amendments Convention a.k.a. Constitutional Convention/ Con-Con.  In a February 10, 2017 article published by the  Arkansas Project, Senator Stubblefield, an American Legislative Exchange Council (ALEC) member, makes several claims that he can’t support.

Some of the claims made by Senator Gary Stubblefield (ALEC) are as follows:

The following email was sent out to the legislators with not one legislator providing proof to the contrary regarding the information sent out by Secure Arkansas.  Please note: Not one of the Sponsors of an Article V Amendments Convention provided any evidence against Secure Arkansas’ statements.  Senator Gary Stubblefield could not defend his position on calling for Constitutional Convention. See Senator Gary Stubblefield’s responses below.

Dear Distinguished Member of the Senate Committee on State Agencies and Governmental Affairs:

Ask any sponsor or promoter to please provide the supporting documents to defend their current position for an Article V Amendments Convention. So far, not one of the pro Con Con legislators has done this.

A Convention of States (COS) and a Constitutional Convention/Con-Con are the same. The COS is not mentioned anywhere in the U.S. Constitution.

You just convinced me to vote yes. Thanks

Sent from my iPad

You never did change your VOTE.  You were voting YES all along because of ALEC. Do you support Wolf PAC too?  This is a left wing group that is trying to get an Article V legislator sponsors in Arkansas.

Also you never did provide any documentation that showed that the states are in control of the Article V process. Since you sponsored some of the Article V legislation you should have all the talking points for proving your case.

Keep your lies up and I will block you. I don't have time for your games.

Sent from my iPad

Is this the way a legislator should respond?  Many people are complaining about Senator Stubblefield's condescending, non-professional attitude.

Above all of those copied and pasted emails, we mentioned the February 10, 2017 article published by the  Arkansas Project, in which Senator Stubblefield, an American Legislative Exchange Council (ALEC) member, made several claims that he can’t support.

The Arkansas Advance Institute’s mission statement claims to educate policy makers and the public’s about policy and government. Arkansas Advance Institute aids the reprehensible State Policy Network (SPN). SPN is a big think tank networked throughout the country which assists ALEC and spins disinformation in the states!  SPN has become a major ally with ALEC in the 48 states in which this foul State Policy Network operates.

Click here to see the hundreds of radical organizations that support a Article V Constitutional Convention. The link comes from MOVEtoAMEND.org. Some of the groups that you may be familiar with are:

ALEC touts itself as Right Wing, but it isn’t. They are a corporate bill mill and they actually support corporate agendas (some international), NOT the wishes of the people — which is what the legislators SHOULD be representing.

“Amid an exodus of more than 100 corporations from the American Legislative Exchange Council (ALEC), Common Cause and the Center for Media and Democracy sent federal authorities new evidence last week that ALEC is a corporate lobby masquerading as a charity at the expense of taxpayers and voters.”

Watch this video for a better perspective about what’s going on with ALEC:

The Investigators: ALEC – The Backroom Where Laws Are Born (6:31 minute video)

This is a glimpse into the world of the American Legislative Exchange Council (ALEC), a corporate-funded charity that pays for lawmaker trips to resorts where they leave with ready-to-pass bills. Neither ALEC nor the Georgia legislature would show us where the money comes from, or to whom it goes.

The IRS Whistleblower Complaint exposes ALEC’s misclassification as a 501(c)(3) public charity with a mountain of evidence that the group exists to bring its members — 2,000 state legislators and hundreds of corporations — together behind closed doors to develop and push model state legislation.

The IRS Whistleblower Complaint calls for an immediate investigation, revocation of ALEC’s 501(c)(3) status, the imposition of necessary civil and criminal penalties, and collection of unpaid back and present taxes for corporate lobbying that is inconsistent with ALEC’s tax-exempt status.

ALEC isn't a charity — it’s a front for corporations to gain access to legislators and push for laws that benefit their private interests.

That’s lobbying, plain and simple, but ALEC’s charade lets its corporate backers claim their funding for ALEC as a charitable gift and deduct it from their taxes. That means taxpayers pick up the tab for ALEC’s influence scheme.

“The Congress, whenever two thirds of both Houses shall deem it necessary, shall propose Amendments to this Constitution, or, on the application of the Legislatures of two thirds of the several States, shall call a Convention for proposing Amendments, which, in either Case, shall be valid to all Intents and Purposes, as Part of this Constitution, when ratified by the Legislatures of three fourths of the several States [mode #1], or by Conventions in three fourths thereof [mode #2], as the one or the other Mode of Ratification may be proposed by the Congress…”

We want to give Publius-Huldah credit for the chart listed below.  If you have trouble reading the chart, click here. 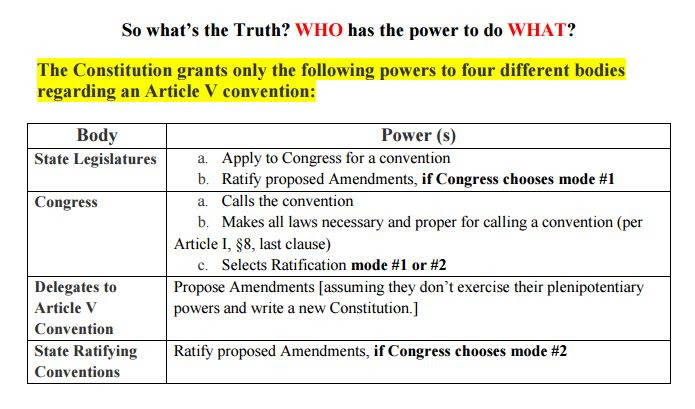 Merriam Webster defines  the word “plenipotentiary” (used in the chart above) as:

But what are Convention Proponents telling State Legislators?  See the Myths in the left-hand boxes, and the Facts in the right-hand boxes below. Special note: Secure Arkansas supports everything in the chart above except the part regarding the last Fact box in section b, we have found that many people object to the words “duly ratified”.

Keep those calls and emails coming in to the Arkansas State Capitol, folks!  The minute you stop contacting them, they will run the Con-Con bills.  They want you to go back to sleep!

Call the phone numbers below and leave a message for your Representatives and Senators to VOTE NO on ANY Article V Amendments Convention legislation. (Bill numbers HJR 1001, SJR 2, SJR 7, and SJR 9)