Why Is The Right Betting The Constitution On An Article V Convention? 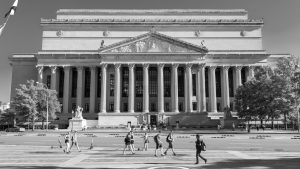 The short yet well-written article below is from The Federalist and is a five-star piece. Elaine Donnelly explains very succinctly why we should NOT promote an Article V Federal Convention. Be sure to read to the end for Secure Arkansas’ comments as well.

Why Is The Right Betting The Constitution On An Article V Convention?

If leftists can rig elections, they certainly can rig a constitutional convention. That would be a major disaster.

I have a question for conservative friends excited about the prospect of an Article V Constitutional Convention (Con-Con) to amend the U.S. Constitution: What makes you think that only conservatives would show up?

The Convention of the States (CoS) campaign, largely led by Republicans, recently persuaded Wisconsin and Nebraska to apply to Congress for an Article V Constitutional Convention. Seventeen states have applied, half of the two-thirds (34) needed to trigger this unprecedented event.

It doesn’t matter what they promise, however, or which organizations support or oppose the Con-Con. What matters is who shows up. Liberal activists would crash the Con-Con party and whatever ratification process ensues. This would not be hard to do, so why wouldn’t they?

Article V says Congress shall call a convention requested by two-thirds of the states. It’s unclear what the role of all 50 states would be, but they are of course blue as well as red. This means that liberal activists will have full access to any constitutional convention.

So if the Con-Con process started tomorrow, who would Nancy Pelosi and Chuck Schumer select as delegates? Pelosi could exclude Republican choices, as with her January 6 committee, or trade her speaker’s gavel for the Con-Con chairmanship.

Conservative Con-Con promoters will not control who attends, what issues are discussed, or what constitutional amendments ultimately are approved. The convention will make all decisions and conservatives will not be able to guarantee the outcome.

Conservatives who blithely assume that only conservatives would be empowered to participate in a Con-Con, and that ratification procedures would block unwanted results, should read Mollie Hemingway’s book, “Rigged: How the Media, Big Tech, and the Democrats Seized Our Elections.” As Mollie wrote, well before Election Day arrived, leftist factions used insider manipulations and bare-knuckled tactics to wire the election for Joe Biden.

The Constitution empowers state legislatures to oversee elections. Thirty-nine states modified their laws or procedures in 2020, and many courts and state election administrators got away with changing or overriding election rules without legislative approval.

Why would such tactics not be used to control the outcome of an Article V Constitutional Convention? Millions more “Zuck bucks” could easily subsidize Con-Con crashers participating in expensive state and national conventions, especially in blue states.

Most leaders of the Article V Con-Con movement have no personal experience with the dynamics of political conventions, much less contested conventions. Key decisions are made months before a national convention begins, and decisive motions often are passed without warning with a gavel crack on a voice vote.

As reported in “Rigged,” courts are useless when fast-moving political events override internal organizational rules and even established law. Several book chapters end with regret, with statements like, “Republicans later learned…” and “The court ruled in Trump’s favor, but it was too late.”

Presidential elections come and go, but Donald Trump’s loss was a small setback compared to the political calamity for America if our Constitution were permanently altered to suit progressive goals.

Regardless of how an Article V convention is called or who promises what, it is naïve to assume that a pre-written set of “rules” for a Con-Con would play out as conservatives expect. Once a convention begins, it makes its own rules. Promises about procedures and outcomes are meaningless because they are unenforceable.

When things go wrong—like marching brooms and buckets swamping the Sorcerer’s apprentice in Disney’s “Fantasia”—courts would be no help. In disputes about convention procedures or results, advocates making promises today will lose later in court where, if they win, it will be too late. Either way, this is a fiasco in the making.

I saw how this works years ago, when I was active in grassroots issues and elective politics in the Michigan Republican Party. In 1988 the Michigan Party was the first to choose national delegates. The contentious state convention split in two, and the conservative coalition filed a lawsuit charging violations of state law.

The lawsuit lost in a lower court but prevailed on appeal—many months after the National Convention ended. Recently, the Trump campaign finally won an election lawsuit in Wisconsin, but the ruling is on appeal. Meanwhile, Biden has been president for 13 months.

Now comes legislative redistricting. According to Wall Street Journal columnist Kimberley Strassel, former Attorney General Eric Holder is using aggressive litigation, accusations of “voter suppression,” racial intimidation, and misleading rhetoric to gerrymander election maps and make it harder for Republicans to win in 2022 and 2024. This is no time for conservatives to divert time, attention, and resources to cope with a self-induced Constitutional Convention crisis.

Some well-meaning leaders seem to imagine themselves as latter-day Founding Fathers, and excited followers envision a festive gathering socializing with Fox News celebrities who anticipate a good show. All should reconsider what they are asking for.

Federal spending is unrestrained, but our Constitution is not the problem. It would make more sense for state lawmakers to return federal subsidies to the U.S. Treasury than to bet the Constitution in a reckless gamble they are likely to lose.

Instead of rose-colored glasses, we need a clear-eyed assessment of political realities. Conservatives should focus on strategies to win, without putting our Constitution at risk.

Elaine Donnelly is President of the Center for Military Readiness, an independent public policy organization that reports on and analyzes military and social issues.

In closing: Calling a federal convention will not solve the problems in the United States. It will only exasperate them… and will rewrite our current U.S. Constitution. Once it goes bye-bye, we will become compliant global citizens. We stand at a crossroads of blessing or cursing. Sadly, the whole seditious point of a convention of states (or Article V Convention) is to get a new downgraded constitution for this country.

Will we hold the line? Can we keep our Constitution to the Republic, or will we let it go without even a whimper?

“The Constitution was made to guard the people against the dangers of good intentions.”
― Daniel Webster

The following excerpt below is from a previous Secure Arkansas article entitled Legislators, Rescind All Applications Calling for a Federal Convention – March 7, 2019

Legislators! Rescind All Applications Calling for a Federal Convention. Oppose all Convention of States (COS) Bills!

All previous calls or applications for a convention MUST quickly be sponsored so that they can be rescinded this 2022 legislative session!  Click here for an example of a resolution to RESCIND all calls for a dangerous Article V Convention.

In this alert, we want to draw your attention to the truth about calling for a federal convention.

Since Congress “calls” the convention, they have traditionally claimed the power to determine the number and selection process for delegates. See the April 11, 2014 Report of the CRS (p.4). Congress may appoint themselves and/or lobbyists from special interest groups, and they may hold elections or handle it in any way they so choose.

Congress also determines the number and selection of delegates, and those delegates have plenipotentiary powers (full powers) as well as sovereign immunity (no accountability) for WHATEVER THEY DECIDE TO DO! So, they’re a law unto themselves at a federal convention. States are NOT in control at all!

Since Congress controls the process, it logically follows that the political party in control at the time of the convention would set the rules.  Are YOU comfortable with that, dear reader, considering the current political climate? Keep in mind that pro-convention lobbyists and globalists (the Koch brothers, COS, ALEC, WolfPAC, MoveToAmend, MoveOn.org, etc.) were desperate for a federal convention by 2020. There’s a Marxist mandate for it!

States have ZERO control over this process. Convention of States (COS) and American Legislative Exchange Council (ALEC) are incorrect on how the delegates are chosen, and they have no Constitutional authority to cover their mis-statements.

Below are some of the scheming organizations promoting the perilous Article V Federal Convention:

Remember, the destruction of our U.S. Constitution has been planned for many decades. Our American sovereignty will be lost forever.

“Hold on, my friends, to the Constitution and to the Republic for which it stands. Miracles do not cluster, and what has happened once in 6,000 years, may not happen again. Hold on to the Constitution, for if the American Constitution should fail, there will be anarchy throughout the world.”  ― Daniel Webster