Amazon Took Over Collecting Illegal Sales Tax for the States 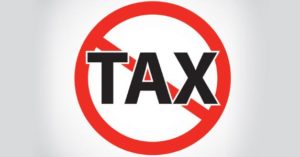 Secure Arkansas mentioned in our last article that we would be writing an alert very soon about Amazon and their illegal collection of the UNconstitutional internet state sales tax, so here is a brief introduction followed by our thoughts and plenty of documentation (as always).

For years, internet shoppers have been able to make online purchases without paying sales tax — as long as the company from whom one was purchasing didn’t have a NEXUS (a physical presence) in that shopper’s state.  Brick-and-mortar companies have fought this because they believed it gave internet companies an unfair advantage. However, it seems that because some states think they’re losing money since sales tax isn’t being collected, they have pushed harder for Congress to do something, and – in case you haven’t noticed – Amazon has actually started collecting sales tax on internet purchases here in Arkansas as of April 2017.  They collect that sales tax VOLUNTARILY which is illegal and goes against the Supreme Court ruling in Quill v. North Dakota (read more about that below).  And, if illegal sales tax collection isn’t enough… according to this Fortune magazine article, “A Missouri retail lobbyist speaking to Bloomberg BNA in January said that Main Street stores still wanted a national law standardizing sales tax policy for online sellers.”  (Wait a minute…  Whatever happened to states’ rights and state sovereignty???)

From where is the push coming for taxation — besides the states?  Keep reading…

U.N. Agenda 21 implementing Agenda 2030: States have been told to identify more predictable and sustainable sources of income, thus establishing progressive tax systems to generate the funds needed for additional government expenditure. The most obvious source is taxation because it would provide sustainable finance! Taxation supports and underpins the depraved Sustainable Development programs that come along with global government to be launched upon the wary and upset public. (Secure Arkansas has informed you many, MANY times in the past about U.N. Agenda 21/ Sustainable Development/ global governance. Check our website for past articles: www.SecureArkansas.com . Use the Search box.)

The problem: The state of Arkansas has estimated that over 100 million dollars of this burdensome tax revenue could be collected from its residents! (In favor of such a vile measure, U.S. Congressman Steve Womack said that it would be more like $150,000. That’s quite a significant difference…)

Why should we stand by and let the government, Non-Governmental Organizations (NGOs), and private companies (like Amazon) create this difficulty with which struggling families to have to deal as consumers?

Ponder this, if you will: IF the collection of this so-called sustainable sales tax from out-of- state sellers, with no NEXUS (no physical presence), WERE actually legal and constitutional, there would be no need for the state to enter into a contract with Streamlined Sales Tax Governing Board, Inc. (an NGO) and Amazon.  A percentage of all sales tax collected by Amazon for the state of Arkansas will be paid to Streamlined Sales Tax Governing Board, Inc.  (See their rules and procedures Rule 806.1 below.) Here we have another NGO getting rich on our hard-earned money via taxes! The court has already ruled, and until the Supreme Court overturns Quill v. North Dakota, no remote seller can charge a sales tax if they do not have a presence in the state! Amazon and the states are in direct violation of the Supreme Court decision Quill v. North Dakota.

**ACTION # 1: Boycott Amazon! – because Amazon appears to be in bed with the government, the National Conference of State Legislatures (NCSL), the National Association of Counties (NACo), AND Streamlined Sales Tax Governing Board, Inc.

Is Amazon or any other out-of-state seller benefitting from the callous collection of this illicit internet sales tax? Keep reading…

The Supreme Court sided with Quill, ruling that a taxpayer must have a physical presence in a state in order to require collection of sales or use tax for purchases made by in-state customers. Physical presence means offices, branches, warehouses, employees, etc. The existence of customers alone (i.e. economic presence) did not create sufficient nexus under the Commerce Clause for North Dakota to impose a sales tax collection burden on Quill Corp.

Again — any remote seller that doesn’t have a physical present in the state cannot charge a sales tax. (See Quill Corp v. North Dakota.) Doing so would be unconstitutional, so Amazon is breaking the law.

South Dakota’s Department of Revenue had sued online sellers Wayfair, Newegg, and Overstock.com in an effort that challenges the federal law prohibiting states from collecting sales tax from out-of-state retailers.

We all know that when any type of taxes are levied against us, it reduces and alters what we purchase. Right? Some of us only have just so much money to go around…

Here are some of the top Best Alternate Sites to Amazon:

The following quote below italicized and in red font was taken from National Association of Counties’ (NACo’s) website showing that they DO support this illegal callous collection of sales tax from remote sellers, even if they don’t have a nexus in the state.

More shadow government at work — NACo: The sinister National Association of Counties (NACo) supports and is working very hard to help county authorities collect the UNconstitutional internet sales tax; “…supporting county authority to collect existing sales taxes from remote, internet sellers”; (Also, they were supposedly working for a more effective definition of “Waters of the U.S.” BUT decided to “sit this one out” and totally failed to officially notify the elected officials in counties across the country regarding the EPA comment period for WOTUS!)  It is the opinion of Secure Arkansas that NACo does not network in order to improve residents’ lives but to further the agenda of Sustainable Development principles and goals!

In case you’re curious, you may click here and use the scroll bar on the right to scroll down and see who was sponsoring NACo’s 2017 Annual Conference that was just held in July.  (Aetna, Amazon, and PayPal, just to name a few. Is this an example of “You scratch my back, I’ll scratch yours.” ??)

Click here for an article which explains that the U.S. Postal Service is subsidizing AMAZON $1.46 per package.

Amazon was not forced into collecting sales taxes on their sales. They registered and volunteered freely, on their own with Streamlined Sales Tax Governing Board, Inc, and the state governments to collect the tax. What do you think Amazon is being paid by the state governments to collect this sales and use tax? Could it be that Amazon is positioning themselves to be a global player?

The Supreme Court’s decision (shown below) prevented the states from forcing the seller to collecting a sales tax from the buyer if they didn’t have a nexus (physical presence) in the state.

1992 Supreme Court decision in Quill Corp. v. North Dakota held: “requiring collection of tax by out-of-state retailers with no physical presence in a state would be burden on interstate commerce and would therefore violate Commerce Clause of U.S. Constitution”.

The following Non-Governmental Organizations (NGO’s) are pushing for the collection of the illegal sales tax by out of state vendors that have no NEXUS (physical presence) in the state:

More newly created shadow government at work: In order to understand what is happening with Amazon collecting Sales Tax in 46 states, we need to look at Streamlined Sales And Use Tax Agreement. The Registered Agent for Streamlined Sales Tax Governing Board, Incorporated is National Corporate Research, LTD, in Indianapolis, Indiana. The Registered Agent registering this Non Profit corporation with the Indiana Secretary of State on July 16, 2010.

Click here to view the Indiana Secretary of State’s certified copy of the “Articles of Incorporation” of  non-profit corporation “Streamlined Sales Tax Governing Board, Inc.” This filing lists the officers, directors, and bylaws. Stated in the bylaws under Section 6, the States must pay the annual cost allocation, hereafter referred to as dues, adopted at an annual meeting of the Governing Board in order to remain in good standing.
This fee would be paid with state money that would be coming from the sales tax collected. You have got to ask yourself, “Who would be benefitting from this tax collecting scheme?”

On April 27, 2005, Richard A. Weiss, Director of the Department of Finance and Administration State of Arkansas signed the “Streamlined Sales and Use Tax Agreement” Petition for Membership. As of February 2017, 23 states have signed this agreement with this non-profit corporation.

On March 28, 2013, Arkansas House Bill 1461 was enacted into law as Act 538. This Act  amended the sales and use tax laws to conform to the Streamlined Sales and Use Tax Agreement with this non-profit corporation incorporated in Indiana.

**ACTION #2: Call these legislators and state employees in your state!

All the Streamlined Sales Tax Governing Board members listed above have had to sign a Confidentiality and Conflict of Interest Agreement.

After reviewing the information in this article, we should try to actively DO SOMETHING (like boycott Amazon!) because more repressive taxation is in store for us in the near future, dear reader! They have now illegitimately “streamlined” it with this NGO! It is a sad state of affairs that is confused, UNconstitutional, and will lead to more economic chaos in the future!

The danger of NGO’s: NGO’s and the United Nations

The United Nations Secretary General has frequently affirmed the importance of NGOs to the United Nations. Again and again, he has referred to NGOs as “indispensable partners” of the U.N. whose role is more important than ever in helping the organization to reach its goals. He has affirmed that NGOs are partners in “the process of deliberation and policy formation” as well as in “the execution of policies.” Other top UN officials, as well as many delegations, have expressed the same ideas. Germany, speaking recently for the European Union, affirmed that NGOs are “essential partners for government and the international community” and spoke of their capacity to “participate constructively in policy-making and implementation.”

Bottom line: the global government wants more tax revenue, any way they can get it, folks! This would be to support and fund the United Nations and Agenda 2030.

Click here to see the global agreement on the automatic tax exchange between jurisdictions! (This pdf was just released.)

“A large number of jurisdictions have announced their plan to implement the new Standard. Around 50 jurisdictions will work towards having their first information exchanges by September 2017; and many more will follow in 2018. These commitments can be found in the Early Adopters Statement, the OECD Declaration on Automatic Exchange of Information in Tax Matters and the G20 Finance Ministers and Central Bank Governors’ Communiqué. To bring these initiatives together, the Global Forum has undertaken a commitment process to ascertain its members’ implementation timelines. A majority of Global Forum members have indicated their commitment to exchanging on the 2017 or 2018 timeline.”

Special note: Nearly every country in the world bases its tax system on residency rather than citizenship.

The U.S. and Eritrea (a tiny country in east Africa)  are the only countries which tax its citizens on their worldwide income, no matter where they live. This is extortion!

Arkansas History! According to Streamline Sales Tax Governing Board, Inc: The state of Arkansas became a full member of Streamlined Sales Tax on January 1, 2008.

In closing: If you are the elected officials in a town or city, DO NOT support any resolution supporting a federal internet sales tax (especially (coming from Municipal League)! If your area has passed such an oppressive resolution, please reconsider, and withdraw this life-altering, fascist legislation. Brutal taxation chaos is staring us straight in the face! If Arkansans think we have been taxed enough already, just wait until the Streamline Governing Board gets through with us!