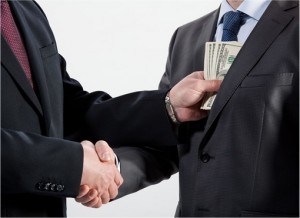 Secure Arkansas calls on Arkansas Senator Jake Files (R), a real estate developer and contractor from Fort Smith, to resign his senatorial office in Arkansas Senate District 8 effective immediately! This article from May 2017 reveals information about an $80,000 wire transfer to Senator Jake Files’ company that certainly looks very suspicious and unethical. Then, here’s another article from August 2017 about the FBI investigating Senator Files which looks like wire fraud and money laundering, dear reader. (Be sure to click on the links above to read about this. We cannot stress this enough.)  Here’s a snippet about the FBI investigation from the Times Record:

“On December 29, 2016, Files emailed three materially false and fraudulent bids to Western Arkansas Planning and Development District that represented bids from LEGO Construction, Williams Power and Light, and Dianna Gonzalez to lay water, sewer and electrical lines at the River Valley Sports Complex,” the affidavit states. “The lowest of three bids was the one ostensibly from Gonzalez. Geffken stated in his interview on July 27, 2017, that at the time Files submitted the three bids to the Western Arkansas Planning and Development District in December 2016, the city of Fort Smith was not aware that Gonzalez worked for Files and/or FFH Construction. Subsequent investigation has revealed that the three bids Files emailed to the Western Arkansas Planning and Development District to support the GIF application for $46,500 were fictitious.”

Be sure to read that last sentence again:  “three bids Files emailed to the Western Arkansas Planning and Development District to support the GIF application for $46,500 were fictitious.”

That means FALSIFIED.  MADE UP.  NOT REAL.

And those may only be the tip of the iceberg…

Here’s a snippet from Wikipedia:

Files has been accused by several companies of misusing the General Improvement Fund (GIF) to steer public funding that he controls to support payments to his nonprofit. According to the Arkansas Democrat-Gazette, Files has paid $150,000 from the GIF toward the building of a $1.6 million sports complex for the city of Fort Smith.[3] Files has been accused of submitting false bids for the project, a charge which he denies.[4]

Senator Files, an American Legislative Exchange Council (ALEC) member, has held public office since 1999 and needs to resign so that room can be made for an Arkansas senator with integrity and conviction. Our legislators represent US (We the People)… but how can they lead us and represent us if they’re not honorable people who will serve us and not Non-Governmental Organizations, their buddies, and their own non-profit organizations?

We are asking for Senator Files’ resignation (and the resignation of other guilty legislators) because this senator knows very well what trouble he is into, and other corrupt legislators also know where the problems with the General Improvement Funds (GIF) lead.

GIF money comes from taxes, and residents in Arkansas are burdened with some of the highest taxes in the nation. Taxpayers are outraged because we have been greatly disenfranchised — not only the people in Senator Files’ district but also Arkansans in districts all over the state.

Frauds and kickbacks seem to be a very real problem here in this state of Arkansas, don’t they?

The NGO running the show with Arkansas’ tax dollars is the Arkansas Association of Development Organization. For a copy of the organization’s By-Laws, click here.

Active non-governmental (NGO) odious partners of the Arkansas Association of Development Organization are:

Pay attention! The vile corporations and non-governmental organizations are running much of this state and country! They seem so GREEDY! This is how the contemptible global elite do it! It’s important to know that NGOs rely heavily on both corporations and government money to operate. NGOs can even accept money from individual donors and private foundations. Our elected officials are told what to do and when to do it! And it looks like some of them are even paid “hush money”, one way or another!

The Districts are as follows:

Attention!: Be sure to click on the IRS 990 filings linked above. All of those MILLIONS of dollars in assets are from TAXPAYER money, and total assets exceed $40 MILLION.

In addition to the eight Arkansas Planning and Development Districts, many Arkansas counties have similar organizations.  (Some of the GIF money may be stashed in organizations with similar names as shown below. Is this just another layer to hide the money?)

Part of the organization names are as follows:

Also, the General Improvement Funds (GIF) in Arkansas need to be shut down completely because unauthorized tax dollars are being doled out indiscriminately, and there isn’t enough accountability over those funds. Again, we’re talking millions and MILLIONS of taxpayer dollars. The GIF treasury is funded through the Arkansas General Assembly and distributed via GIF grants. Click here to view the General Improvement Fund (GIF) for the 90th Session Projects Account Act 1147 of 2015. Page 6 of this GIF report shows that the total Arkansas Legislators Funding was as follows:  Approved $13,394,000 and Available $13,394,000.

That’s over $13 MILLION, and these funds are administered by the Arkansas Department of Finance and Administration but are directed to Non-Government Arkansas Planning and Development Districts.

We want to make sure that you understand:  these eight NON-GOVERNMENTAL (NGO) Planning and Development Districts are funded by Arkansas tax dollars.

Why do we need a non-governmental middleman running the show?

You need to know that for every grant applied for, there’s also a fee (it differs, up to 10% or more) which is also payable to those same planning and development districts.

Why can’t the cities/counties make a request directly to the legislators for Economic Development funds for a project? The NGO Planning and Development Districts could be dissolved to save millions of dollars of taxpayers money! But sadly, this present setup of the GIF money has allowed for money laundering of taxpayer funds.

This GIF money has been directed to MANY other organizations throughout the years besides Ecclesia College and Decision Point, Inc.  (You may recall our previous articles about Ecclesia College – here’s one that mentions Arkansas State Rep. Micah Neal pleading guilty to accepting bribes.)

“Arkansas legislators directed more state grant money to a tiny Bible-based college in Springdale and to a Bentonville addiction treatment provider and its affiliates than almost any other nonprofit in the state, an Arkansas Democrat-Gazette investigation shows.”

“The college, the treatment agency and a multi million-dollar pool of grants controlled by individual legislators through planning districts are the focus of federal indictments.”

Please keep in mind that our current Arkansas General Assembly needs to be accountable for the legislation they have sponsored as well as other unethical things that have gone on at the Capitol. Our Arkansas government is currently being shaken!