States That Stopped an Article V Convention in 2018 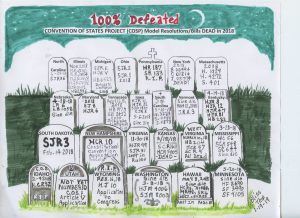 Article V Convention Must Be Killed!

Legislators, do your own homework on SJR3. Do NOT rely on anyone else. After you have done your own research, you should come to the same conclusion that voting for SJR 3 is un-American and plays into the hands of the socialists. The extreme Left wants to replace our U.S. Constitution and Bill of Rights.

None of the 27 amendments to the Constitution have been proposed by Constitutional Convention.

A call for a constitutional convention under Article V of the U.S. Constitution is a threat to every American. It is hostile to our constitutional rights and civil liberties.

On the surface, all the reasons for having a federal convention sound good… saying, “we need a Federal Balance Budget Amendment, Term Limits, etc.” Some of these so-called good reasons are being used to fool many of the legislators into calling for a Federal Constituional Convention/ Article V convention. It is a smoke screen that confuses the misinformed lawmaker. Legislators, don’t fall for the lies.

This alert is a detailed report with information regarding other states and Article V legislation that FAILED, and it includes convention information as well.

The following articles are from sources other than Secure Arkansas. They show that States can NOT control the delegates or the process of an Article V Federal Convention.

From US News
Constitutional Convention Chaos

COSP hasn’t won ANY states since May 12, 2017!  Or Wolf PAC since June 2016, and Balance the Budget Amendment since November, 2017. And NO State ratified Compact for America’s massive new taxes amendment which would delegate to Congress authority to impose a national sales tax and a national value added tax since 2017.

Alabama & Missouri passed the term limits application in 2018; but since they had already passed the COSP (which contained Term limits and BBA, it didn’t matter.

Note: Louisiana passed a delegate bill this year (HCR 4), but the delegate bill is merely meaningless (as opposed to the virulent delegate bills introduced into Virginia and Tennessee). HCR 4 also doesn’t hurt us because Louisiana had already passed the COSP & BBA applications for an Article V convention.

We need to rescind all applications calling for an Article V convention!

In closing, we want to leave you with a couple of quotes:

Heads Up! Try to attend these meetings this week held by Robert Brown:

Warning!:  Congress may count the applications however they want – they may aggregate them to get the 34 total, so it is imperative that we stop any new states from passing any “brand” of application and that we get states to rescind their existing applications. 2019 could be a bloodbath, as the mandate for Agenda 2020 draws closer – don’t be complacent, take action!