Politicians Bought Off by Fluoridation Lobbyists 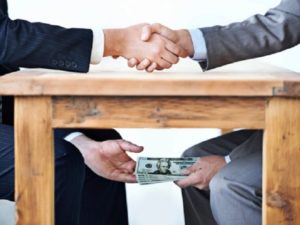 Once again, collusion, deception, and fraud are being used to pass legislation at the State Capitol. Sadly, any legislative bill can be brought for enough money offered! A fraudster is someone who gets money by deceiving people. Follow the money to go behind the scenes and discover the players who are promoting the toxic water fluoridation, and you will then have your eyes opened.

Big Money is involved all the way around!  See below for information that could expose Delta Dental and their questionable practices of shuffling money to politicians around the country.

The FBI may be interested in the information in this article and can be contacted in Little Rock, Arkansas at their Field Offices at 501-221-9100. Click here for the FBI’s Little Rock website.

We will get back to the corruption and deception… after we share this latest optimistic news:

This water wholesaler DOES NOT want to be forced to add poison (fluoride) to their drinking water. Here’s a fantastic news article written by Becky Gillette of the Eureka Springs Independent from March 27, 2019. Directly below are excerpts quoting Andy Anderson, Chair of the water authority:

“We have to get the law changed,” Anderson said. “The more I learn about fluoridation, the more it irritates me that our state legislators and ADH have forced this on us. They do not seem to understand or are willing to admit the harm fluoride causes to a lot of people. It is a neurotoxin, more toxic than lead, and has been linked to autism, ADHD and Alzheimer’s disease. A couple weeks ago, a new study showed the eyes are affected by fluoride increasing glaucoma and macular degeneration.”

Anderson said there is no doubt in his mind that the addition of fluoridation chemicals to the Carroll Boone Water District in 2015 is to blame for increased lead levels seen in the drinking water of Harrison and Eureka Springs. Harrison has exceeded the EPA threshold for lead and is taking corrective action. In 2018, lead testing in Eureka increased to .014 ppm, which is just .001 ppm away from the EPA lead action level of .015 ppm.

“It has been demonstrated that fluoride will leach lead out of plumbing,” he said. “Around the country there are reports of when they stopped feeding fluoride the lead levels dropped.”[Bold font for emphasis, Secure Arkansas’]

We’ve linked two articles from that timeframe and some excerpts directly below. Keep reading to follow the collusion.

Arkansas Senators Don’t Let Science – or the Public – Stand in the Way of Mandatory Fluoridation – February 25, 2011

NEW YORK, Feb. 25, 2011 /PRNewswire-USNewswire/  Despite admission by the Federal Government that American children are being over-exposed to fluoride, and that fluoride’s benefits are primarily topical, the Arkansas State Senate passed legislation on Thursday to force fluoridation on the entire state. This legislation will require cities to add unnecessary, untested fluoride chemicals into the water supply, clearly risking the health of many Arkansas residents.

Fluoridation chemicals—often purchased from Mexico, China, and Japan—are waste products of the phosphate fertilizer industry that are often contaminated with arsenic and lead. These industrial-grade chemicals have never been tested for safety in humans or animals, and have never received approval from the U.S. Food and Drug Administration.

While the Arkansas House and Senate rush to cast votes that will affect most residents of the State, the public’s voice has been excluded from the process. Oddly, the push for mandatory fluoridation in Arkansas comes in the wake of an historical shift in the U.S. fluoridation program.

The decision, which comes at a time when many studies and reports are questioning the safety of fluoride, especially in children, is highly concerning. It is also based on neither the public support of Arkansans nor valid science, which is illustrated in part by the fact that the Pew Research Center for the People & the Press, a Washington D.C.-based think tank that claims not to take positions on policy issues, was one of the driving forces behind the initiative.

And perhaps one of the reasons they avoid the science is because it proves fluoride is harmful. Many studies have shown that artificial water fluoridation is linked to thyroid dysfunction, bone damage, and lowered IQ, among other things (https://www.naturalnews.com/fluoride.html).

“There are at least 24 studies that have found an association between lowered IQ and levels of fluoride in water as low as 1.9 ppm,” said Paul Connett, PhD, director of the Fluoride Action Network, a non-profit advocacy group devoted to exposing the truth about the dangers of fluoride.

So, how does this affect Arkansas?  SB 359, now Act 197 from 2011, is known as the water fluoridation mandate bill in Arkansas. Much of the entertainment and lobbying for the bill was done by Delta Dental through lobbyist DBH Management Consultants, and it appears that this was done to hide the true source of lobby funds given from Delta Dental and their other clients to DBH. Remember: Delta Dental is a client of DBH Management.

To get around the election laws, DBH formed multiple PACs (Political Action Committees).

There is no difference between the nursing home bribes from Michael Morton to Judge Maggio’s campaign funds that ended up in the judge going to prison and the Delta Dental bribes to the Arkansas politicians to get SB359 passed as Act 197! This is not the only case where Big Corporate Money came in and paid off the legislators to get legislation passed.  Click here to read one of Secure Arkansas’ articles on Judge Maggio and the nursing home connection with several Arkansas politicians. There are still other politicians mentioned in this article who have not yet been charged with bribes in exchange for voting for favorable legislation for nursing homes.

The contribution limit is $5,000 from any person per Political Action Committee (PAC) in any calendar year. DBH being organized under NINE current entities means that contributors can donate up to $45,000 total. (NOTE: Election Law Reform should be required.)

Bruce Hawkins, the DBH founder, was a former Arkansas State Senator who became a lobbyist, and he set up seven of those separate DBH PACs.

The recipients of the DBH money past political campaign contributions are as follows:

Dr. Mouden moved on to become the Chief Dental Officer for the U.S. Centers for Medicare and Medicaid Services (CMS) in 2012.  This con man has travelled from Weston, Missouri, all the way to Washington D.C! That’s quite a step up for a small town Missouri dentist!

Update on Mouden: Mouden retired as the Chief Dental Officer for the U.S. Centers for Medicare and Medicaid Services (CMS) September 30, 2017. (Medicaid is a huge cash cow, folks!) He then went to work for Avesis, a Guardian Company. We are sure Avesis hired him to develop ideas for state-based Medicaid programs and for Medicaid and Medicare Advantage partners. Unfortunately, he also still holds three faculty appointments at the University of Arkansas for Medical Sciences (UAMS) in the Colleges of Medicine, Public Health and Health Related Professions. In the past, this man has proven to be unethical in order to get his way and move up the ladder.

For more important information that you may have missed on Mouden, click here.

Secure Arkansas is still holding the 6 affidavits which state that the reports Mouden used to promote the need for water fluoridation NEVER HAPPENED, meaning he falsified his reports!

Pay Attention! Delta Dental of Arkansas has given $194,700 to 131 different filers spanning 14 years.  The split of the money is as follows:

This practice of bribing politicians is still going on, in order to keep the public water supplies fluoridated. Delta Dental preys on greedy politicians and knows how to cover all their bases in government!

SB 359 was referred to the Senate Committee on Public Health, Welfare and Labor. The committee members in 2011 and total amount received from Delta Dental and DBH (Delta Dental is a client of DBH) were:

SB 359 was passed out of committee. It takes 5 members to pass a bill out of the committee.

The recipients of the Delta Dental past political campaign contributions are as follows:

The Pew Report was the main report that the lobbyists used in persuading the legislators to pass SB359. This was a fraud since six of the eight items in the report did not apply to Arkansas.

From the Arkansas Ethics Commission “Rules on Lobbyist Registration and Reporting”  under Prohibited Acts and Penalties § 517. Prohibited acts page 17:

(g) No person engaging in lobbying may:(1) influence or attempt to influence, by coercion, bribery or threat of economic sanction, any public servant in the discharge of the duties of his or her office;(2) purposely provide false information to any public servant as to any material fact pertaining to any legislative or administrative action;

(h) (1) Any person criminally convicted for violation of any provision of Ark. Code Ann. § 21- 8-607(a) or (b) shall not act as a lobbyist for three (3) years from the date conviction and shall be subject to a fine of not less than $100 and not more than $1,000.(2) Any person violating this three (3) year ban will be deemed guilty of an additional violation of subchapter 6 of chapter 8 of Title 21.

SB 359 went through the Senate Public Health, Welfare and Labor Committee in 2011. The former committee members in 2011 were:

Here’s a brief excerpt from the UAMS article linked directly above:

All of the Arkansas Water Districts were threatened by ADH that they must enter into and sign a contract with Delta Dental for the start up money needed for public water fluoridation, mandated by Act 197. The problem is that for a contract to be legally binding or valid, an agreement must be formed between two parties. Any contract that lacks an agreement between the two parties is NOT VALID. A water district cannot be forced to sign any contract with which they don’t agree, due to threats by any individual, group, or government agency.

Reminder: The SENATE PUBLIC HEALTH, WELFARE AND LABOR COMMITTEE in 2011 was the committee that pushed and passed SB 359, the fluoride mandate legislation. This was an Act to mandate fluoridation in all systems that serve 5,000 or more.

For the 2011 Arkansas Senate Vote on the Fluoride Mandate SB359, click here.

For the 2011 Arkansas House Vote on the Fluoride Mandate SB359, click here.

So, what’s been happening lately regarding water fluoridation? Some news from last week (March 2019): The skilled actor/player Senator from Berryville, Bob Ballinger ran a good bill, SB 604, in the Senate Public Health Committee … yet, the problem is, it looks like he knew that this good bill had NO CHANCE in this corrupt committee. Secure Arkansas sees this as a charade in order to please his outraged constituents in his area that are concerned about the hazardous water fluoridation, knowing all along that his 8 negligent Senate buddies would never vote in favor of this good bill because they are all dominated by their master manipulators in the American Legislative Exchange Council (ALEC) that promote toxic water fluoridation. Ballinger (ALEC) and the committee put on a phony show like always, but regretfully, the fine folks that travelled to the Capitol to testify about the dangers of fluoride, from all across the state, left disappointed once again because there was no rebuttal allowed. Could they be afraid to let the truth come out?

Note: you may recall that Attorney/Senator Bob Ballinger from Berryville represented Ecclesia College and is still hiding records on how the GIF money was spent and how many other legislators were involved in the corruption.

In closing, it seems that we cannot get GOOD bills through this Senate Public Health Committee and haven’t for years, and it appears that the committee is working for the lobbyists and not for we, the people.