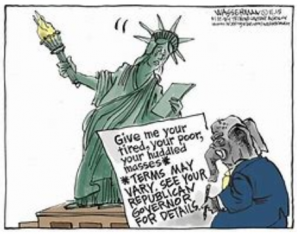 We are advising you of 3 IMPORTANT UPDATES:

1. Please attend the City, County & Local Affairs Committee meeting — and NOTE THE TIME CHANGE — on Monday, January 13, 2020 at 9:00 AM in the MAC Building, Room A, located behind the Arkansas State Capitol, 500 Woodlane St. Little Rock, AR 72201. Governor Asa Hutchinson is scheduled on the agenda to address the committee concerning Arkansas allowing Refugees into the state.
HERE IS THE MEETING AGENDA.

ALSO, we have some FOIA information which we received from Governor Hutchinson’s office as well as the Department of Human Services (DHS):

2. Shown directly below is the FOIA reply letter that we received from Governor Hutchinson’s office basically saying that they denied our request for information regarding who the participants are who are seeking after the refugees to settle in Arkansas. 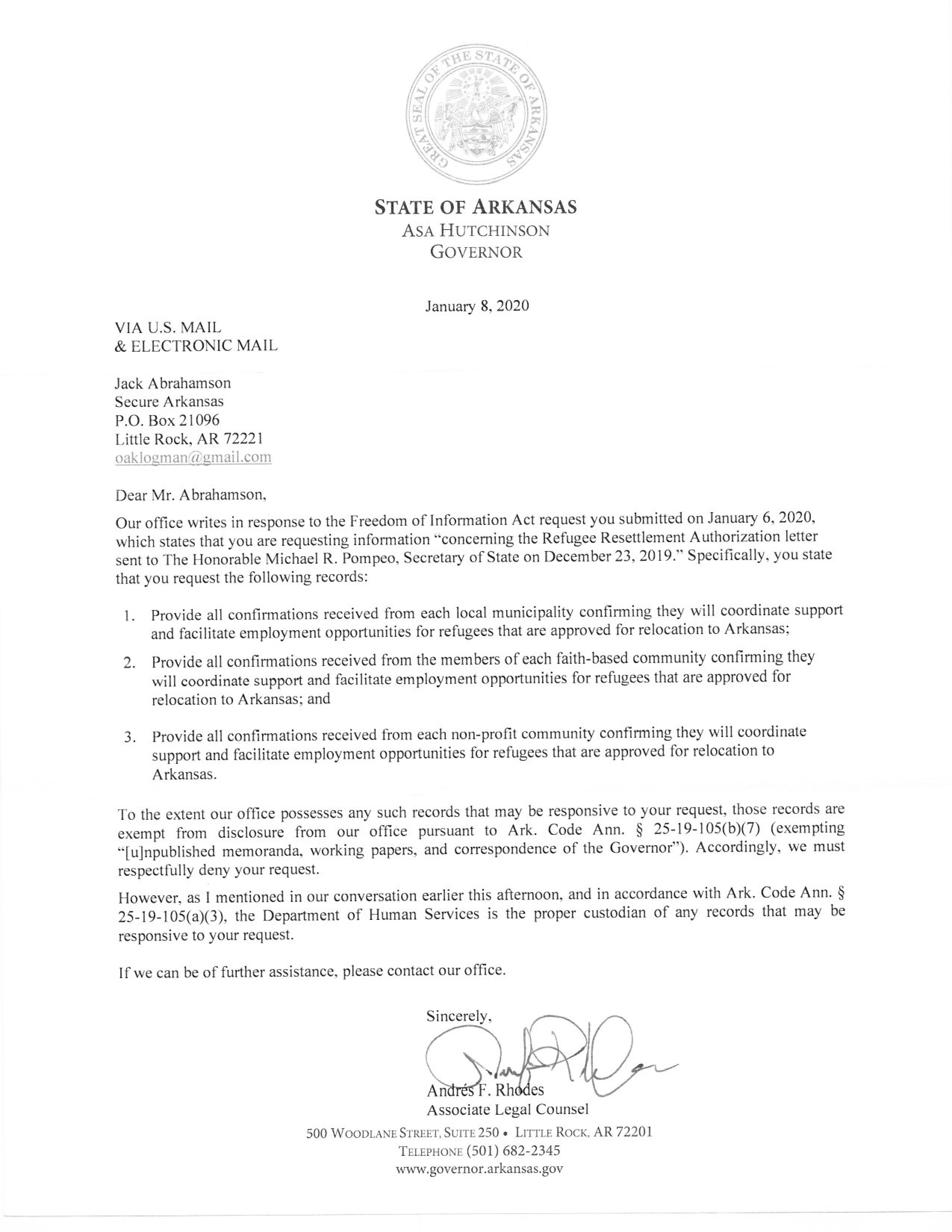 3 .  Lastly, click here to read the various letters that we received from Rebekah Lee, FOIA Officer at the Department of Human Services (DHS) — several letters.  These are from the main supporters of the “refugee” resettlement program, and most of them are from Northwest Arkansas, including Fort Smith. You’ll recall from many of our previous alerts that these are the nefarious players and participants in a global agenda. Please do NOT be duped by their smooth, positive talk and well-constructed wording.

One letter is from Henry Ho, co-founder and Chief Strategy Officer for Field Agent, Inc. We looked up this organization and found that it was conceived in 2009 and began considering how the smartphone could change the way companies gather location-specific, retail information. Field Agent had a chance to relocate to Silicon Valley, but preferred to remain part of the Walmart supplier community in northwewst Arkansas. Field Agent, Inc serves United States, Canada, Mexico, Australia, South Africa and the United Kingdom.

Another letter is from Rep. Megan Godfrey from Springdale, which is where the Catholic Charities Immigration Services are located. We can’t help but wonder – does Rep. Godfrey work with Catholic charities? Keep in mind that she’s an Arkansas State Representative, so she’s able to draft and convince other legislators to pass legislation regarding refugee resettlement and other globalist agendas…

Other letters are from the Washington County Judge, the Mayors of Springdale, Fayetteville, and Fort Smith… as well as the Chamber of Commerce.

So, WHY is Governor Hutchinson allowing these non-elected officials, the Chamber of Commerce, and a handful of mayors to speak for us, the people of Arkansas?

It’s high time for businesses to be removing their memberships from the Chambers of Commerce.

Oh, and by the way…. Canopy Northwest Arkansas is inviting refugees into the state and is headed to Washington, D.C. in March to lobby our federal representatives. We do NOT support this agenda, folks! Can you see the hand of Walmart and Tyson at work, as well? And we noticed Senator Boozman’s picture when we clicked on the Canopy link above. We hope he’s not supporting this refugee resettlement program. Here are Canopy Northwest Arkansas’ community partners, and they are partnered with Lutheran Immigration and Refugee Service (LIRS).

Globalization involves the expansion of international culture and political and economic activity, being driven by the United Nations under Agenda 2030 (previously, Agenda 21.) Unfortunately, we are moving from an election process to global governance, and as some of you are aware, it’s been coming on for a long time. It’s part of the one-world government and involves the deceptive ecumenical movement as well. We urge you to pay attention to what’s going on in your community as well as around the world.

The State Department is paying refugee contractors over $2100 per refugee

18 Republican Governors Ask for More Refugees in Their States, While “Charities” Are Cashing In and Grifting Off of American Taxpayers

Trump signed an executive order allowing cities and states to ‘opt out’ of resettling refugees in their communities. A total of 18 Republican governors, out of 27, have betrayed citizens by placing the interests of non-citizens above them by requesting more refugee resettlement.

The immoral governors include:

Ned Ryun reported that the U.S. State Department is paying refugee contractors over $2100 per refugee, of which they get to keep 45% of the money, which has nothing to do with charity or religious values.

Follow the money! These 9 non-governmental organizations (NGO’s) are funded by the Department of State and include:

The so-called “refugees” are supported with food, housing, clothes, and referrals to social service providers that help with medical care and employment; and they are enrolled in various benefits and welfare programs. They also receive support learning the English language along with help in community orientation.

“This is how red states become blue… and how America ceases to be America.”

Arkansas Govenor Hutchinson has betrayed the people. See article below.

In a letter to U.S. Secretary of State Mike Pompeo dated December 23, 2019  affirming the state’s participation in the United States Refugee Admissions Program, Hutchinson said Arkansans have a history of welcoming refugees. 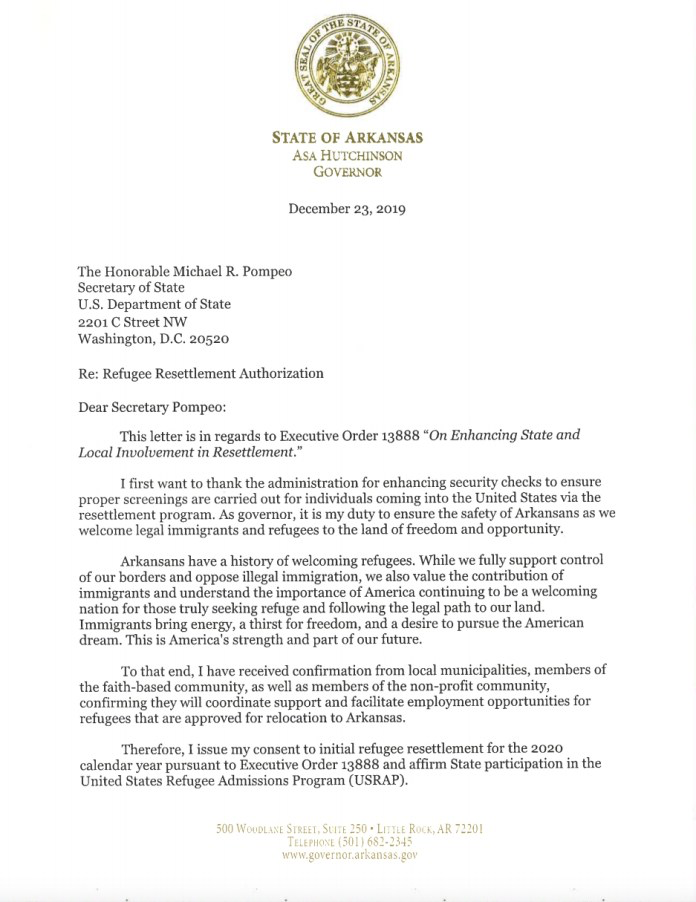 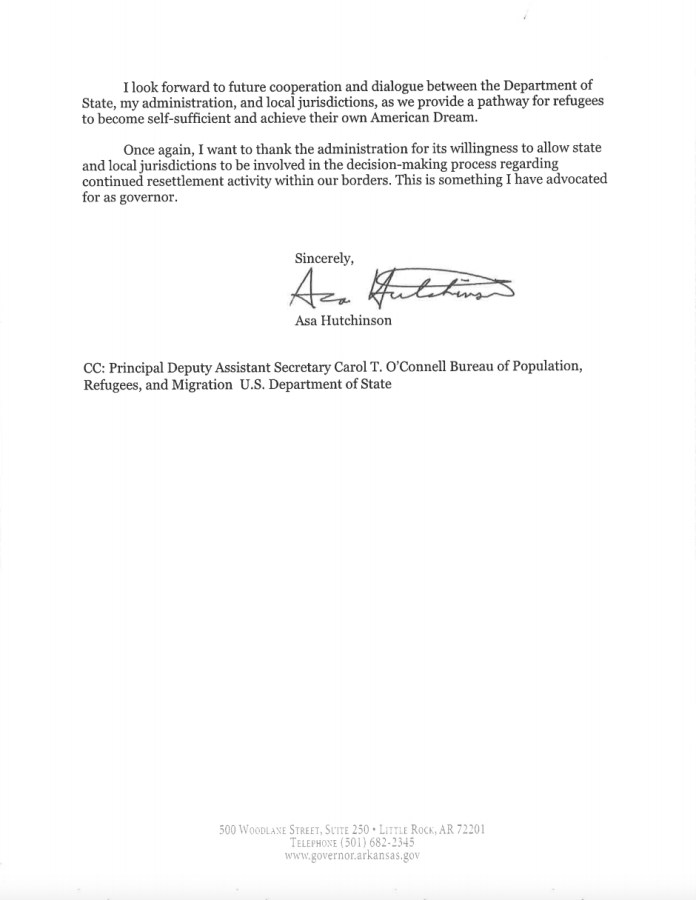 More than 30 governors have confirmed they will keep accepting refugees so far, but about a dozen Republican governors have stayed silent on the issue, according to the AP. (Evidently the governors have until January 21, 2020 to decide.)

President Trump’s order requires governors to publicly say either that they’ll accept refugees or that they will not, even if cities or counties welcome them. No state has announced plans to shut out refugees entirely, the AP reports.

The new refugees will be joining the millions of asylum seekers that are already INSIDE the United States! What is the vetting criteria to determine refugee status?

We have seen 18 incompetent GOP governors sign up for this egregious globalist agenda regarding refugee settlements, and sadly, Asa Hutchinson was one of them. This failed tax-and-spend governor is out of control, dear reader! He lacks leadership skills and common sense. Arkansas is a state that is laboriously taxed, one of the worst in the country, and we must NOT be forced into more refugee settlements. Taxpayers in this state cannot bear the costs of years and years of our hard-earned tax dollars going to more refugees with no cap in sight! Many communities are suffering already, and the legislators are well aware of this fact. Surely the governor must know that those tax debts are weighing down the public with already-limited budgets and could strain people’s paychecks to a breaking point.

The big question: what local authorities partnered with the governor on this disturbing issue? (Counties, cities or towns.)

Here’s the FOIA that was sent to the Arkansas Governor’s office. We will keep you posted on what we receive back:

Note: The City of Fayetteville will probably be on the list of cities providing resettlement to the refugees. (Mayor Lioneld Jordan is still in office. He is a big player in the U.S. Conference of Mayors. Mayors are directed to do many things at these Sustainable Development conferences and have big plans for America in 2020. Voters have lost their voice!) Again, we will try to provide a list of places around the state where refugees will be placed.

In Arkansas, the resettlement program is handled by:

The Arkansas Department of Human Services — The Refugee Resettlement Program of zArkansas assists newly arrived eligible refugees to assimilate into the American way of life. The program offers financial and medical services to eligible refugees for up to 8 months after arrival in the United States. The Arkansas Department of Human Services make available to these refugees applications to apply for Supplemental Nutritioin Assistance Program (SNAP) and the Transitional Employment Assistance (TEA) Program.

This will be a big drain on tax resources of the state, county, cities, and school districts.

Governor Hutchinson’s policy needs to be Arkansas First and block refugees from coming into Arkansas.

We must remember that the U.S. has the largest resettlement program in the world. This nation is long overdue for a moratorium, dear reader! Secure Arkansas seriously doubts many have refugee status. We wonder how many of them were actually persecuted. (Generally, a refugee is an alien that has supposedly experienced persecution in some form.) Moreover, we should add that it has NOT been about the little children, folks. We see the chaos of so-called “migration” occurring all over the world. Refugees, illegal aliens, and open borders bring repercussions.

And, if you recall, Governor Asa Hutchinson was with the Department of Homeland Security (DHS), and it seems he is still an actor/player operating with them. He was the first Undersecretary for Border and Transportation Security at DHS. Looks like he and his global cohorts are cooperating fully with the International Organization for Migration (IOM), a United Nations migration program. Asa Hutchinson has surrounded himself with corrupt politicians, many of whom have been jailed or are on the verge of conviction.

Here’s a short snippet from the UN’s Director General in a 2014 report:

In 2014, the Senior Regional Adviser for the Americas continued to strengthen cooperation with relevant regional institutions. The Adviser also contributed to reinforcing migration policy dialogues and cooperative mechanisms, and participated in or coordinated inputs for meetings, workshops and conferences, including support for a series of bilateral consultations between IOM and Member State governments and regional institutions.

Interesting? Quoting the Department of Homeland Security from their website:

And they are telling us to be prepared:

“Be responsible for your personal safety. Know where emergency exits and security personnel are located. Carry emergency contact and special needs information with you.”

Tragically, some of the Human Trafficking operatives are using the refugee programs to their advantage. Do you think that one of the things that the former Arkansas State Senator Linda Collins-Smith (RIP) uncovered could have led to her death (murder)? Could Senator Colllins-Smith also have uncovered the sex trafficking connecting with DHS, Foster Child Service, Court Systems, and the Clinton Foundation, also? Remember the sinister NGO, Clinton-Bush Haiti Fund? A hotspot for human trafficking! Just think about that!

How familiar are you with the human trafficking problem in the United States? Check out these statistics:

Traffickers typically target men, women, and children who are vulnerable, have little to no social safety net or who are without strong family relationships. It can happen to people of any age, race, gender or nationality. Violence, manipulation, or false promises of a well-paying job are often used to lure victims into trafficking situations. Victims frequently do not seek help due to language barriers, fear of their traffickers or fear of law enforcement.

The number of Human Trafficking Cases Reported for Arkansas was 85. Many of the cases go unreported.

Secure Arkansas wanted to include this news clip from KATV from October 9, 2019 concerning human trafficking.

In closing, we would have to be blind not to see the dominant hand of the one world government at work. There will not remain one sovereign nation upon this planet, unless we stop the criminal network that fuels and supports the inefficient refugee policies in place at this time. These heinous refugee policies propel human trafficking in which many people have been forcefully displaced! Crime fuels crime and creates a global conflict zone. Organized criminal groups appear to be running this state.

Once again: follow the money, stay informed, and stay tuned…