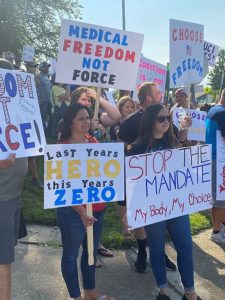 U.S. Sovereignty is in danger as member nations in the WHO Negotiate a Pandemic Treaty… and they vote on the New Amendments today and tomorrow! May 23-24, 2022

Choose to Stand for Health Freedom

America is in great danger of devastating dictatorial rules from the World Health Organization (WHO)! Our U.S. Health Policies and sovereignty are clearly at stake.

We must be proactive… NOW!

Were you aware that the menacing World Health Organization (WHO) has proposed a shocking “Pandemic Treaty” that is being forced through all channels of power right now?

This puts America’s national sovereignty and constitutional rights in great danger! Other countries are in the same great danger unless we — all humanity — push back with overwhelming opposition immediately.

Here are the malignant NEW World Health Organization (WHO) Amendments which would build on the previous ones from 2005. The amendments will be secretly rushed through and voted on May 22-24, 2022! These devastating amendments were quietly submitted by the United States on January 22, 2022 and would give our national health sovereignty to the World Health Organization (WHO) through the World Health Assembly to be updated and implemented by the International Health Regulations (IHR). The dreaded “Proposed Amendments’ to the International Health Regulations would increase foreign influence and power over U.S. health policy and sovereignty.

Were the newly proposed amendments to the International Health Regulations ever published on a U.S. government website… AND were they ever published in the Federal Register?

Does the President have the authority to permanently relinquish the final approval over whether or not a state of emergency may be declared by the World Health Organization within the sovereign geographical territory of the United States?

The powers of government are delegated in trust to the United States, and are incapable of transfer to any other parties. They cannot be abandoned or surrendered.

* If these amendments are adopted this week, it would allow the World Health Organization (WHO) to declare a Public Health Emergency of International Concern (PHEIC) WITHOUT the agreement of the member state in question where the outbreak is occurring.

* The World Health Organization (WHO) could declare a PHEIC and share information with other states without the approval of the state in which the incident is happening.

Important Information: The International Health Regulations from 2005 (under the Bush Administration) appear to have been approved as a sole executive agreement. The proposed amendments from 2022 (under the Biden Administration) go beyond the scope of the 2005 amendments and may need to be recategorized as either a congressional-executive agreement, a treaty or as an unconstitutional over-reach.

(a) Whether any undertaking, document, or set of documents constitutes or would constitute an international agreement within the meaning of the Act or of 1 U.S.C. 112a shall be determined by the Legal Adviser of the Department of State, a Deputy Legal Adviser, or in most cases the Assistant Legal Adviser for Treaty Affairs.

Many doctors are standing up and opposing the World Health Organization, but our Congress needs to get involved and stand up, too! This is urgent and needs to happen immediately.

Dr Robert Malone: Time to Flush Out All WEF Members from Our Governments

Robert Malone sat down with the Epoch Times’ Roman Balmakov to expose the WEF’s agenda of total control through the WHO and their plan to take over countries under the premise of a health crisis, which of course they can fabricate anytime to suit their NWO goals.

There’s a bill in the United Nations right now asserting that, in the case of a public health emergency, a new constitution that the UN would create would circumvent – be placed over – all of the Western Democracy constitutions.

They want to create a system, in which they can use a public health emergency, which is whatever they decide it is – just like the definition of mis- and disinformation – they want to be able to use a public health emergency to justify suspending the Constitutions of all the Western democracies and implementing the things that they want, which includes the Digital ID, QR codes, tracking on your cellphone and the PRC-branded social credit system – which, we’ve now learned, in Justin Trudeau’s guidance will destroy the banking system.

To our U.S. Congress: Are you willing to give up your freedom to let the World Health Organization (WHO) control you?

Jair Bolsonaro announced this week that Brazil will not turn over its sovereignty to the World Health Organization (WHO).

The WHO, led by Tedros Adhanom Ghebreyesus failed repeatedly and pushed outright lies about the China Coronavirus pandemic in 2020.

Now the globalists, including Joe Biden and the godless left in America, want to turn US sovereignty over to the WHO for future crises determined by the China-dominated organization.

The World Health Organization, a thinly disguised proxy for Big Pharma and corporate interests who push for Technocracy, is going for all the marbles: creating a global treaty that would cede all power to the UN/WHO to mandate injections, vaccine passports and total surveillance. ⁃ TN Editor

Video explaining what the WHO Pandemic Treaty is about (14 min. long)

In a video published on her YouTube channel last month, MEP Christine Anderson explained that, since March 1, 2022, an intergovernmental task force has been working on a revision of the treaties that exist between the WHO and its member states.

Anderson explained that the revision “aims to give the WHO de facto governing power over its member states in the event of a pandemic, without involvement or consultation with national governments or national parliaments.”

Gates, Fauci Funded Experiments on Bird Flu – Will It Be the Next Pandemic?

Natural bird flu is notoriously harmless to humans, but Bill Gates and Dr. Anthony Fauci have, for many years, funded research to develop a bird flu pathogen capable of infecting humans.

Creating a disease that doesn’t exist today is being done through the Gain of Function. This is high-risk research, which can have the effect of making viruses more deadly, more transmissible, or otherwise more able to flourish. Gain of Function was banned in the US so Fauci and Gates moved some of the research out of the country to Ukraine.

Some of that research has been undertaken in Pentagon-funded biolabs in Ukraine.

Bill Gates has a direct conflict of interest with the World Health Organization. The Gates Foundation is the second-largest contributor to the WHO: as of September 2021, it had invested nearly $780 million in its programs. Germany, the biggest contributor, had contributed more than $1.2 billion, while the US donated $730 million.

Kill the WHO Pandemic Treaty. It is unconstitutional. Bill Gates stands to make billions of dollars if WHO can declare world wide pandemics. These monsters need to be stopped!

ACTION ALERT: Call your federal delegation, our U.S. Senators and Representatives, in each state immediately.

It’s mandatory that they get notified on the dangers happening with the new WHO Amendments May 22-24, 2022 at the 75th World Health Assembly!

Let them know how you feel about this coup d’etat by the World Health Organization (WHO), and make sure your U.S. Senators and U.S. Representatives receive and read these two documents:

It’s imperative that these hostile amendments DO NOT get adopted in Geneva, Switzerland this week, Monday or Tuesday, May 23 -24, 2022.

The amendments should be seen at once by our Congress and the federal delegation in each state. They undermine U.S. sovereignty and should be opposed.

EVERYONE needs to call their U.S. Senators and Congressmen!