Secure Arkansas’ position is to support state sovereignty, our liberties, our property rights, and our rights to life, liberty, and the pursuit of happiness. Therefore, we believe that an application for an Article V convention will fundamentally destroy our existing Constitution and way of life. Supporting details are in this article.

Legislators, Tea Parties, Republicans, Democrats, media outlets, and many people should consider the risks of calling a convention through an Article V Amendment application. Indoctrination and outright lies of this global elite agenda have filtered down to the general public. (The process of indoctrination is teaching a person or group to accept a set of beliefs uncritically!)

Legislators, we compel you: don’t summon Congress to call a convention through SJR3!

We are asking you to question what the well-paid lobbyists have told to you. And please consider the fact that lobbyists are PAID, therefore they have an agenda. Secure Arkansas does not, other than freedom. We are not paid.

Please, withdraw your name immediately as a sponsor to this deceptive bill/resolution for an Article V amendment convention which has an ill-fated unknown outcome. It’s a bait-and-switch!

All previous calls or applications for a convention MUST quickly be sponsored so that they can be rescinded!  Click here for an example of a resolution to RESCIND all calls for an Article V Convention.

The convention lobbyists work with various groups on both the left AND the right that are calling for an Article V amendment convention. The ill-advised legislators supporting an Article V Constitutional Convention are either ignorant or are part of the problem in their desire to destroy the U.S. Constitution.

Those legislators supporting SJR3 must not have done their proper homework and appear to be void of conviction. They should not be trusted. Powers and rulers in high places are at play here.

Attention, dear reader!  It’s imperative that the legislators read the progressive book “The Constitution in 2020.”  (It’s important to know the real enemy). Ask your legislator if they have read this reprehensible book. We doubt if any legislator is familiar with it. (Cass Sunstein wrote the 2nd chapter in the book.) If your legislator had read this book, he/she would not be sponsoring or co-sponsoring SJR3. George Soros and other black-hearted globalists are funding and playing BOTH SIDES of this agenda in order to control the sinister outcome by 2020. This is called controlled opposition.

From this KeyWiki site:

The Constitution in 2020 calls on liberals to articulate their constitutional vision in a way that can command the confidence of ordinary Americans and sway them to the progressive side of dogma. It is a propaganda piece laid out in painstaking and alarming detail.

Cass Sunstein is directly connected to Soros’ funding for the Constitution 2020 movement, which openly seeks to create a “progressive” consensus as to what the U.S. Constitution should provide for by the year 2020.[2] In April 2005, Sunstein was the opening act for a conference at Yale Law School entitled, “The Constitution in 2020,” which sought to change the nature and interpretation of the Constitution by that year.

Eric Holder sat on the board of a Soros-funded group pushing the same “progressive” constitution in the Constitution 2020 movement.[2]

Article V of the U.S. Constitution provides two methods of adopting amendments. Either:

NOTHING in Article V, or anywhere else in the Constitution, authorizes Congress, state legislatures, or anyone else to LIMIT the agenda of an Article V convention. And even if they did, the Supreme Court has made clear that the process of amending the Constitution is a “political question” into which the courts would not intervene. Once the delegates convene, they are answerable only to themselves! (But aren’t they highly influenced by special interests by both the right AND left? So, couldn’t that negatively affect the outcome of any convention?) The product that emerges from an Article V convention will be radically different from what those asking it to be called may have envisioned, just as the Philadelphia Convention of 1787 departed sharply from its mandate to propose amendments to the Articles of Confederation. 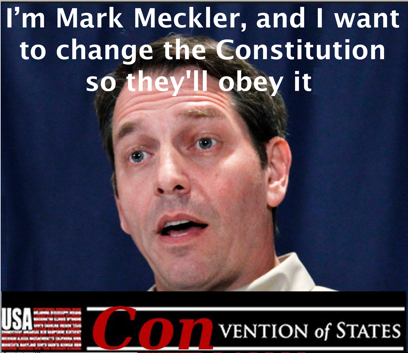 Why Arkansas Legislators should vote “NO!” on SJR 3 and ALL applications asking Congress to call an Article V Convention or in Newspeak, a “convention of states.”:

1. Article V provides that if two-thirds of the States apply for it, Congress shall call a convention for proposing Amendments to the U.S. Constitution. However, Delegates would have the right, as recognized in the 2nd paragraph of our Declaration of Independence, to throw off the Constitution we have and write a new constitution which creates a new government.1

2. The Convention of States Project (COSP) implicitly acknowledges the danger of a convention when they say state legislatures should pass “unfaithful delegate” laws which they claim will control Delegates. But such laws can’t control Delegates because:

4. In the Constitution we have delegated only a few powers to the fed. gov’t. But for 100 years, everyone has ignored the existing limitations. We can’t fix federal usurpations of non-delegated powers with Amendments, because Amendments can’t take away powers the Constitution doesn’t grant!

2 Four US Supreme Court Justices and other luminaries have warned that an Article V convention is fraught with peril.

3 George Soros wants a Marxist constitution in place by 2020. Globalists want us in the North American Union. The proposed Newstates Constitution establishes a dictatorship and is easily ratified via national referendum (Art. XII, §1).

Brilliant men have warned that Delegates to a convention can’t be controlled:

Yet, convention supporters ridicule these warnings as “fear mongering.” And they quote law professor Scalia in 1979, before his decades of experience as a Supreme Court Justice, to “prove” otherwise.

Ask yourself:  Is it possible that James Madison, Alexander Hamilton, Chief Justice Jay, Justice Goldberg, Chief Justice Burger, and Justice Scalia understood something about the plenipotentiary powers of Delegates to an Article V convention which the pro-convention lobby hasn’t grasped?

The likes of the puppet lobbyist Mark Meckler and his false doctrine that he’s been instructed to teach are NOT going to better our government, dear reader! After all, “we’re living in the New Age,” is the new cry. The Convention of States and Meckler’s other groups have spent MILLIONS of dollars per year to promote this. The corrupt Arkansas Legislature cannot be trusted either. More indictments are still likely to be handed out continuing from last year’s disgrace. The Arkansas Legislature is as corrupt as it gets, folks. We can’t let them dictate the fate of our beloved state and summon Congress to call a convention. They have stated that they can control things once a convention is underway, but we assure you, they CANNOT!

Globalists insist that our U.S. Constitution must be totally rooted out of the memory of the people and our national sovereignty abolished, if we are going to be under a true global citizenship with a One World Government.

People across the nation can’t believe how liberal and progressive this state has now become under RINO (Republican In Name Only) leadership. All eyes will be on Arkansas Thursday morning, January 24th as the malignant SJR3 is brought to Senate State Agencies and Governmental Affairs Committee. (The so-called tribunal will be assembled for this war of aggression against freedom and the U.S. Constitution.)

Global players and programs await this PREdetermined outcome of this cruel ordeal… unless you take responsibility and take action now.