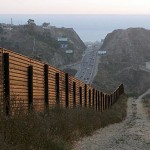 Illegal Immigration is a Crime

Under Title 8 Section 1325 of the U.S. Code, “Improper Entry by Alien,” any citizen of any country other than the United States who:

As long rumored they would, in cooperation with pro-amnesty groups, the Obama administration has gone around Congress and arbitrarily issued a new deportation policy for illegal aliens.

It’s working! Keep pouring on the pressure! The legislators say they can’t believe how many emails and phone calls they are getting about HB1292. They vote tomorrow so this is our last chance to make a difference. The switchboard is jammed and we want to keep it that way.